Deep in the heartland of the Cotswold Hills, on the 9th July, the epic and ever-growing 2000 Trees Festival will begin. 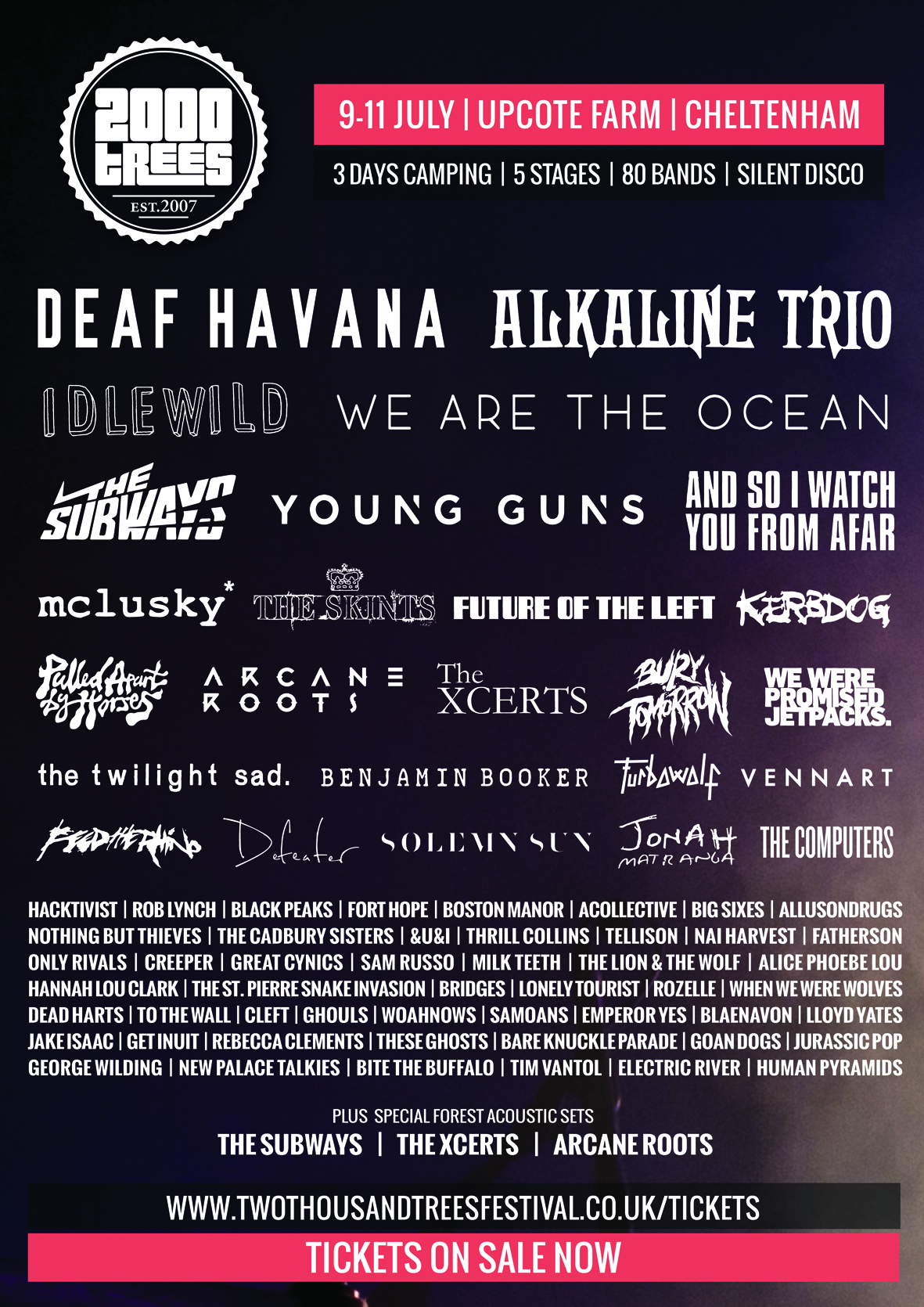 Deep in the heartland of the Cotswold Hills, on the 9th July, the epic and ever-growing 2000 Trees Festival will begin.

With only two days for normal campers to squeeze in as many of the 100+ ground-breaking acts as possible, we thought we’d make it easier for you to make your decisions by letting you know a few of the acts that we’ll definitely be seeing.

Now, coming from the flat-lands of West Norfolk myself, I can’t help but have a deep-rooted affection for Deaf Havana. Despite all the odds, the heartache and the struggles, this band have continued to rise, leading to a bunch of sold out shows, a slot on the main stage at Reading and Leeds and now, a headlining slot at 2000 Trees. Expect their set to be loaded with tracks from their latest album Old Souls, rather than tracks from their adolescent screamo-punk roots of Meet Me Halfway, At Least. Moving away from their hardcore phase back in 2008, has led to Deaf Havana developing a much more mature alternative rock sound and has opened up whole range of avenues for the band to travel down. James Veck Gilodi’s strong and ardent vocals lead the heavily guitar and percussion driven band, alongside his mesmerising and exposing lyrics that are sure to tug at the heartstrings of the folk at 2000 Trees. Word on the street is that they’re playing an acoustic set too.

Since their support slot with Brawlers early this year, Milk Teeth have held a little spot in our hearts. The Bristol quartet have a sort of sweet n sour sound that makes for a tasty bite live: it’s heavy, thrashing rock that has a dollop of melody and charm, thanks to bassist Becky’s sultry vocals. Live, this band really show what they’re made of; stick to your guns punk rock, powered by emotion and a lot of sweaty band members.

When looking through line-ups for festivals, there are always a few questionable band names that make an appearance: The St Pierre Snake Invasion is the one for 2000 Trees. The five-piece from Bristol are an aggressive punk band that will divide a crowd. Main vocalist, Damien Sayell, channels ear-piercing shouts over old-school guitar riffs and clattering drums. With an EP titled Everyone’s Entitled to My Opinion, and their description on their bandcamp slamming the music scene for, “polluting minds and airwaves alike”, it’s clear their set will be fuelled by confidence, carnage and a lot of controversy. We strongly recommend it.

After falling in love with The Xcerts after the release of their third album, There Is Only You, we’re excited to finally watch these guys put on a superb rock show. This lovely Scottish bunch have been on the circuit for quite some time now, and with their pop anthemnic choruses embedded into their alternative rock, the crowd at 2000 Trees are sure to be in for a treat. Recent singles ‘Shaking In The Water’ and ‘I Don’t Care’ are bound to make an appearance and be left ringing in your ears for days.

Nothing But Thieves burst onto the scenes in March this year after the release of their insanely catchy single ‘Itch’, and received lots of airtime from the radio giants. With underlying pop basslines and sublime vocals hollowing from singer Conor Mason, there is a big future on the horizon for Nothing But Thieves. The almost faultless vocals soften the otherwise harsh guitars and drums, giving the band the slickness and bravado of a band as big and as bold as Muse – minus the bells and whistles.

WOAHNOWS do pop-punk and they do it well. Although they brand themselves as indie punk on their Facebook – pop-punk is what screams through their jangly guitars. The trio from Plymouth have already dabbled their feet in small events such as Y Not Festival (where they’re making a second appearance this year), and have learnt how to work a festival crowd. Bagging themselves the early slot on the Friday, the exuberant aura of WOAHNOWS will be a perfect way to begin this weekend.

2000 Trees is a festival solely dedicated on promoting the best unknown acts in an unknown field in Gloucestershire. The gang at Raw Meat can’t wait to put on our muddy boots and revel in the sounds echoing in the trees and stand in solidarity with the festival goers.