F.U.R.S' new single is out today! It's dreamy, beautiful and has hints of Yeah Yeah Yeahs in the riff to vocal ratio. 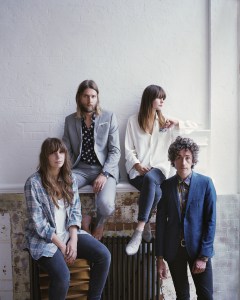 F.U.R.S' new single is out today! It's dreamy, beautiful and has hints of Yeah Yeah Yeahs in the riff to vocal ratio.

F.U.R.S' new release, 'An Eye On The Vicious' is the second single to be taken from their debut album (unreleased), after 'Just Kids', which was released earlier this year. Written by guitarist Liam Wade, 'An Eye On The Vicious' is a lovely example of F.U.R.S' reverberating, melodic and layered sound. Each section of the song raises the level of moody beats and further pushes Danielle Wade's vocals. It's lovely to listen to, so listen to it. I wouldn't describe the song as psychedelic, but it's certainly big - ambitious. If you go and listen to 'Just Kids' you hear a little more of the psychedelic instrumentation, but they're a pop band at their core - and a great one. If you like Summer Camp, but wish they were more band-orientated then consider yourself a F.U.R.S fan and get excited about the upcoming album.

The album was recorded and produced by guitarist, Wade and drummer Olly Betts.