Versatile, longstanding and really fucking powerful; Kind of Like Spitting have been around for nineteen years (sort of). 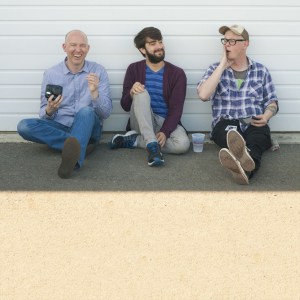 Versatile, longstanding and really fucking powerful; Kind of Like Spitting have been around for nineteen years (sort of).

And new single, 'Bullied By A Bee' proves that singer/ song writer/ band leader, Ben Barnett not only still has plenty to say, but is still relevant.

If you don't know Kind of Like Spitting then let me enlighten you. Formed in 1996 they released twelve albums (all good, some great) in only seven years. The band broke-up in 2006 until Barnett orgnaised a re-form in 2014. The current lineup consists of Barnett, (guitar/ vocals), Brian Grant (bass) and Dante Johnson (drums).

'Bullied By A Bee' will take some people back to the nineties Portland that the band were born from, but look (and by that I mean listen) around you. It's not just that grunge that has seen a resurgence,  but that the young bands of today have the shoulders of naughties rock to stand on as well. The desperate energy of the Libertines and the careful precision of Bloc Party have created a new type of greenish orange monster (is that where the word grunge came from?).

Barnett's writing and Kind of Like Spitting have layers. His writing is intelligent and fun. The band are a force to be reckoned with. In this single there are riffs upon riffs, pace and feel changes, and little surprises that can only instil delight in the distortion loving listener. Rather than dormant, Barnett has been lying in wait, and he has been listening.

Topshelf Records are releasing a split LP with Kind of Like Spitting and Warren Franklin & The Founding Fathers called It's Always Nice To See You on 02.02.15. Hopefully this re-form isn't only for this record. I had no idea how much I'd missed them.

The latest single from Stephen EvEns, 'Dustbin Man' is a janky tale of respect for the many currently keeping the world ticking over.

Hear it here first, the second single from Ester's new album, Turn Around. Out 27.03.20 via Midwest Action.