It's taken Brooklyn musician Damon McMahon a year and a half to finish Love, his third album as Amen Dunes. Was it worth the wait? Out 12.05.14 on Sacred Bones. 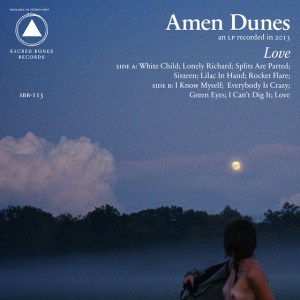 It's taken Brooklyn musician Damon McMahon a year and a half to finish Love, his third album as Amen Dunes. Was it worth the wait? Out 12.05.14 on Sacred Bones.

One of the key differences in how to approach Love, compared to earlier efforts like Through Donkey Jaw is to examine the songwriting process, where McMahon has moved from rapid binges of self-directed scribbling towards a much longer and more involved approach - including collaboration and appearances from musicians such as Elias Ronnenfelt of Iceage fame, and members of Godspeed! You Black Emperor.

This investment of time and patience in the album's production has not necessarily lead to a more complicated album - the poppy hooks of Through Donkey Jaw remain, but the emphasis is on creating a sprawling sense of space. McMahons voice (now closer to the crystalline pitch of Fleet Fox's Robert Pecknold than in previous recordings) remains the focal point of the album, but the backdrop is a wall of guitar noise. Soft piano chords and unexpected sounds rise and fall, appear and disappear over the album's course. 'Splits Are Parted' exhibits this fuzzy aesthetic, with blurry notes reverberating behind McMahon's plaintive voice, a sound that only reveals its complexity when real attention is paid to it. 'Splits' is an example of how the instrumental swell of the percussion section and increasing focus on the vocals creates a sense of momentum in an album that flirts with the threat of tedium; exemplified by the single-tempo 'Lonely Richard'. It takes balls to write 'Sixteen', where McMahons voice (and a healthy dash of reverb) has to fill the song's sonic space with only sparse piano chords for company. The time invested in production has paid off.

By the time we reach 'Green Eyes', McMahons gaze is fixed so firmly on his navel that you can almost hear his neck crackling, and it's a song which would mark a weak point on the album without the brief appearance of gravel throated, Iceage front man, Ronnenfelt. It's smart to follow 'Green Eyes' with 'I Can't Dig It', which works as both a demonstration of McMahon's vocal dexterity and as a continuation of the albums homage to guitar texture. The visceral garage rumble provides a new context for McMahon's voice, and the shot of adrenaline the album needs. Once again, pounding percussion keeps the sense of forward motion intact, and the song eventually grows into a swirling storm of crackling guitars.

In need of a dose of praise is the album's sincerity and refusal to self-ironize. McMahon is smart to trust in his haunting voice and top-draw instrumentation to create a sprawling and powerful washed out blur of an album which never quite outstays its welcome, with moments of standout beauty caught in the thick net of Gaussian guitars and pounding drums. It takes a lot of work to make something sound so effortless, and McMahon's collaborative efforts and newfound momentum create a bright picture of what might follow.