The talented Kiera Cullinane went on tour with Bad For Lazarus, starting with Glastonbury Festival. This is what she had to report. 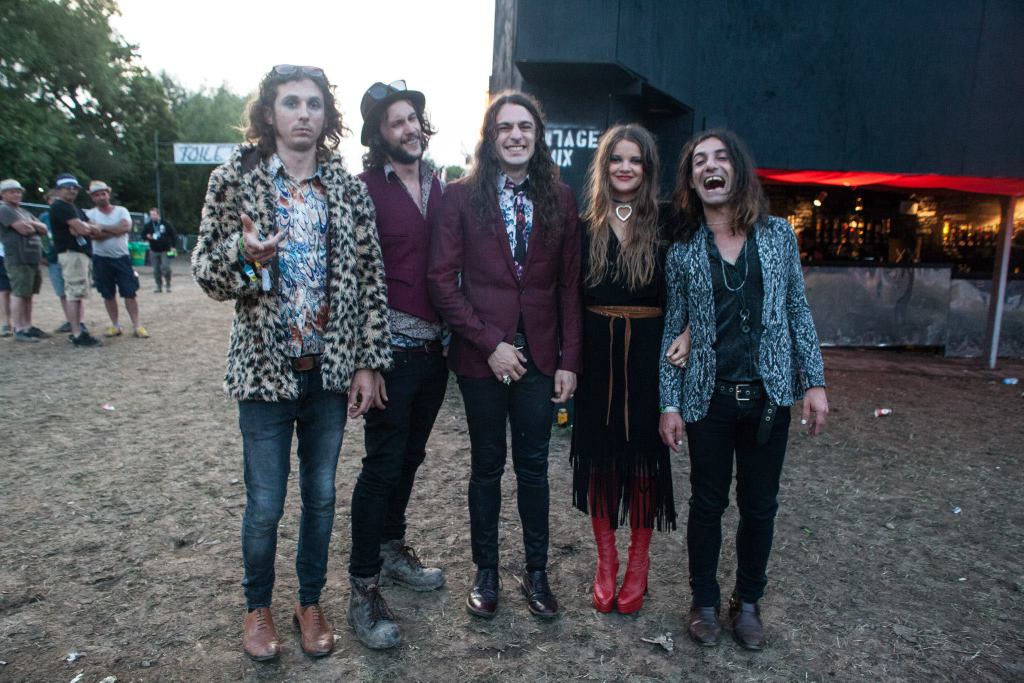 The talented Kiera Cullinane went on tour with Bad For Lazarus, starting with Glastonbury Festival. This is what she had to report.

As a photographer, it’s always fantastic to watch Bad For Lazarus. Just as fantastic to follow them around Glastonbury… So I did.

I had been told long before it was announced, that Bad For Lazarus would be playing Glastonbury this year. The man informing me, Griffstar Gurnal, has been to every Glastonbury Festival since 1970, and since I met him three years ago, has been wearing the very same pair of trousers at every Bad For Lazarus gig he’s been to. (The reason being, they belonged to Joe Strummer). Griff is the enthusiastic, psychedelic, energetic Bad For Lazarus manager, who has been thinking outside the box since the box was recognised to be square.

We arrived on site on the Tuesday, fashionably late, especially if you would consider pitching a tent in daylight to be fashionable. Originally pitched in front of the toilets, 20 minutes of tent building later, the tent was unpegged and moved to an almost completely empty field about 2 minutes from original toilet plot. Whilst perhaps irrelevant, I feel that this confusion combined with a somehow fantastic organisation of enjoyable chaos, describes the band quite fittingly; as well as loosely summing up the Glastonbury experience…

At the end of last year, Bad For Lazarus’ new member, Daisy, joined. Daisy is also frontwoman and guitarist of her band, Pink Lizards, who went on tour with BFL just a week after Glastonbury.

I was told the Glastonbury set was to include what will be the band’s new single, ‘1%’, and a song with Daisy’s lead vocals, ‘Halo’, written by Daisy and singer Rich. Their music, largely described as, “hard to describe” has a more sultry twist in this song; as well as adding another new genre to the music. Daisy tells me, “’Halo’ was an idea I’d had floating around for a while, then Rich essentially pulled it apart and put it back together in a really beautiful way.”

My feeling was definitely that the band belonged here. On the Wednesday evening we sat at the front of the Shangri-La stage that they were to play, and noticed a sign over our heads reading, “We are the 99%”. Perfect?

“I think that’s exactly why it fits in [the music]. I’m not gonna lie, most of the ‘real bands’ I saw were pretty hateful. That’s not Glastonbury’s fault, it’s the times. In fact the night and stage that we played [Saturday, Shangri-La Hell Stage] had us, Slaves and The Fat White Family. I think that as a trio, that is a lot more in line with the original vision & vibe of that kind of festival. More so that Kanye fartin West, y’know? I’m really proud that’s where we were and what we were a part of.” – Rich

I had assumed this was the first time the band had played the festival, although of course, there was actually a more surreal, Griff-shaped, reality.

“We have been an illegitimate wart of the bum on the festival before; we played two shows a couple of years ago, but we weren’t on the lineup… or allowed in… So this is our first Glastonbury with an invite!”

As it happens, the first time Bad For Lazarus played was seen, and noted, by actor and DJ Craig Charles. “He was so into it he introduced us this year… How cute is that?”

Guitarist Richie considers their music probably has more in common with the original spirit of music festivals, which is very much alive with the Shangri-La organisers who put them on. “Like the famous quote, what are you rebelling against? What you got?”

In the blur of the days between arriving on Tuesday night, and going to the stage to set up on Saturday afternoon, Liam remembers, “Becoming the Pied Piper of Avalon, and employing a harem of Mancunian disciples whilst conducting interviews with an oversized inflatable microphone”, and of course, becoming a multi human puddle at the stone circle. If my memory serves right, (questionable), this would be around the time he acquired a leopard print coat, and first discovered The Turbans, who the band made every effort to see as often as possible. Considering the amount of bands playing Glastonbury, it was surprising how easy it was to not really see any. With a giant, mechanical spider, breathing fire, distracting me (really), one night.

“I’ve been loads of times, but this was the first year I really didn’t have any plan and just wandered off the beaten path. I saw some of the most heart-melting musicians and acts, like a French accordionist in the Green Fields, a blues piano duel at 4am in an empty tea shop… But I couldn’t tell you their names, you can’t YouTube it. It was an actual experience. Imagine that!” – Rich

Any memorable anecdotes? “Our manager employing a troupe of children to bring us waffles and coffee in the morning.”

The last time Raw Meat saw Bad For lazarus was at their headlining slot of the Friday of Flufferfest, at The Shacklewell Arms. The Shangri-La Hell Stage was a lot, lot bigger. It was nice to see a band like this with a stage presence to rival the two great bands playing after them, Slaves and The Fat White Family, play on such a big stage. Like Slaves and The Fat Whites, playing a bigger stage did not lead to any less chaos… But splitting a guitar in two is quite normal.

Caught In The Twist

Old Rats On A New Ship