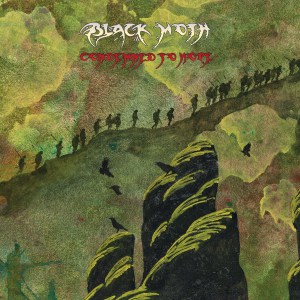 From face value, this album has all the potential to be a great heavy metal album. It consists of everything a stoner rock/ classic metal album should: contagious riffs, epic breakdowns, moany vocals and occasional funky bass lines. When listening to the album, you’re forced to spend the whole time imagining yourself in a graveyard, in the pouring rain surrounded by crosses – you know; all the happy stuff that heavy metal’s associated with. But that’s the problem with this album, that’s all there is. Heavy metal. There’s no change or depth or development or anything, in fact, that would interest those who aren’t metal fans.

Opening track ‘Tumbleweave’ immediately tells you what this album is all about - clean cut, pristine riffs that are closely reminiscent of legends, Black Sabbath. That’s what this album is full of. So full in fact that it gets pretty tedious, pretty quickly. But let’s not focus on the negatives. ‘Looner’ and ‘White Lies’ are the best tracks on the album by far with full throttle, hand-banging rock music that goes all out to impress. Harriet Bevan’s howling and powerful vocals accompanied by her thought provoking lyrics echo through the satanic hooks of ‘White Lies’, adding a sense of empowerment to the song. ‘Red Ink’ is not to be overlooked either. This song creates an eerie atmosphere instantly getting you hooked, as Bevan flaunts her potential with her almost angelic vocals that add a well-needed sense of innocence to the song – as well as the album. Track ‘Slumber with the Worm’ also adds a slightly different edge to the album, with the build-up lulling you into a false sense of security as the guitar and bass creep ever so slowly, finally erupting into an almighty riff.

Separately, most of the tracks on Condemned to Hope have the potential to be huge and the ability to captivate a large audience; yet when put together, something doesn’t work. The captivating hooks and silky vocals begin to get repetitive and more of a habit rather than something new and exciting. This album is drowned in dark and dreary music that is dying for a burst of colour or something special to make it that little bit more exciting. It’s lacking the guts and sheer power that could help them smash through the wall that they’ve built around themselves and help get them that top album that they’re totally capable of. You only need to listen to the guitar solo in ‘The Last Maze’ and the breakdown in ‘Tumbleweave’ to realise that this band have the potential to do and be so much more.