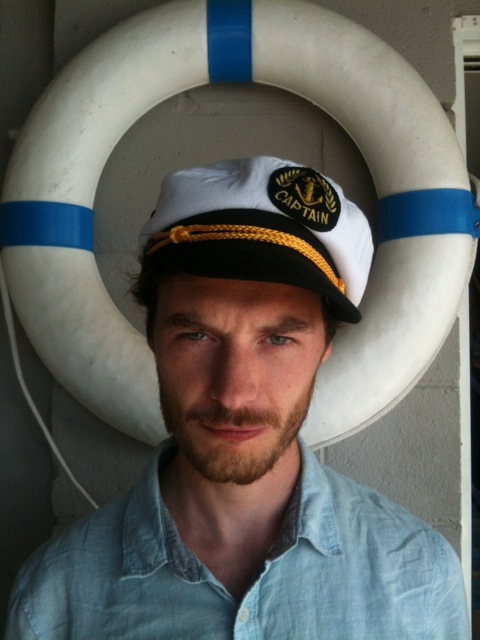 They're nineties rock with a soft indie underbelly; like if Weezer hadn't broken our hearts for three albums, if Wavves didn't sound stoned, if Everclear had never got weak, or (occasionally) if Arctic Monkeys didn't want anyone to like them. Their debut EP, recorded in 2014 at Greenmount Studios, Leeds with producer Jaco Naude (in Sydney, Australia) is available for free download - so get to it.

Raw Meat: Tell us about your local music scene; what’s your favourite local venue, are there any record labels or stores that we should look up, what’s the scene like where you're from?
Phil: We’ve all played around our home town of Leeds for years and are really lucky to have such an awesome scene on our doorstep. If you’re local and you haven’t been down to the Brudenell Social Club then you need to sort your life out. Nathan (the owner) is a great guy and pulls amazing acts pretty much every night of the week. Alongside all the ace venues there’s still some great local record stores like Jumbo and Crash that are keeping the physical release alive. Actually I just headed down to grab a lovely Hookworms 12" this morning. It’s really sweet.
Ali: We really are truly blessed by the music gods to have grown up around Leeds and Hyde Park. Hyde Park is the mecca and the belly of the beast that is the Leeds music scene. You can go down t’pub and hang out with plenty of student misfits and bands of all genres. We all came up playing in bands ranging from acoustic/ metal/ funk and indie between us. It really is a great place to learn your chops and go through the mud as they say, no matter what kind of music you play.

Name one track or band that you love from the past.
Phil: We’re all huge fans of the mid nineties college rock scene and there’s a band called Superdrag whose album Regretfully Yours is pretty much flawless in my opinion.
Ali: When we were kids, Phil made me a mixtape of everything from Rocket From The Crypt, Bjork, Weezer, Sublime, Everclear etc. and so all my music came from him. Although you failed to put this Superdrag band on there? Never heard of themEverclear’s Sparkle & Fade definitely was one of my favourite albums of my teens. My mum also gave me a CD when I was 11 and  said, "Now he’s not the greatest singer, but he really does sing from his soul." That was Nevermind. Cheers mum.

Name one track or band that you're loving right now.
Phil: Man, that’s a tough one to narrow down! Can I have a few? Violent Soho and DZ Deathrays have both brought out offensively good records this year. But local bands like Menace Beach and Allusondrugs are totally killing it right now.
Ali: Um... Am I allowed to say I don’t really listen to much music? Ha, I’m really sorry but it's true. I’m still waiting for something to slap me round the face. When I was a kid I heard The Chilis/ Pearl Jam/ Nirvana and RATM in the space of a bloody week! And I don’t think I ever recovered from that. I’m really trying though. I like that Awolnation band you put on my latest mixtape Phil, Are they new?

Name one track or band that you think we should be listening out for in the future.
Phil: Hands down Violent Soho. It’s only a matter of time before the UK catches on.
Ali: I hear great things about this Black Surf band, Oh man I could literally talk about those guys all day. I mean… the sound, it’s like… it’s like, aaaaw you just gotta hear it! It’s like the past and the future meeting up to have a little chin wag in the present.

What are you up to now?
Ali: So yeah, I moved to Australia to figure out what I was doing with myself and planned on living here for a fair while. Phil sent me about 40 songs he’d written and asked me if iI fancied writing some vocals. I had never connected with music like this before and I just started spewing out ideas on a daily basis. I fell in love with it so much that we wrote and recorded this EP on the other side of the world from each other.  Now I've decided to head back to the UK to make this band a reality with these guys and I’m ridiculously excited about it too.

What can we expect from you next?
Phil: A new single coming out in February and a bunch of live shows.
Ali: Yeah we are basically gonna hit the practice room and define our set and then get cracking with some gigs. The new demo’s are sounding great and we can’t wait to record our first single. There also might be a cheeky acoustic EP coming out for Christmas. So yeah loads going on and I just can’t wait to see what 2015 has in store for us.