Camden Town is known for the weird and wonderful, and for one day a year it's amplified tenfold by the curators of Camden Rocks as they fill it with established and upcoming bands. 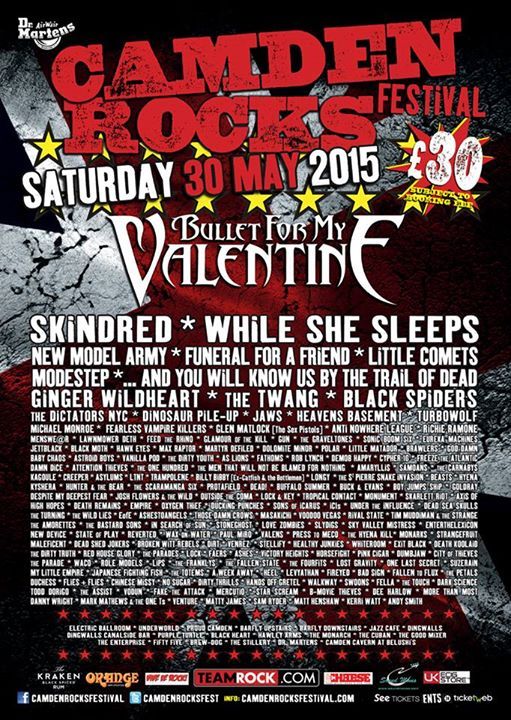 Camden Town is known for the weird and wonderful, and for one day a year it's amplified tenfold by the curators of Camden Rocks as they fill it with established and upcoming bands.

This year, the sold out festival was chock-a-block with rock-stars, rock fans and a lot of confused tourists.

Inevitably, the plan of watching every single band you want to see becomes unachievable as it hits two in the afternoon and you’ve already got your beer goggles on and the venues become fuller by the second, but we managed to catch some blinding sets this weekend. Our three standout bands are below.

Beasts have been in our hearts for a long time now and their recent stint supporting Theory of a Deadman has turned them into the rock band we always knew they could be. Bouncing on stage and lurching into ‘Old Bodies’, Beasts deliver their fuzzy alt-rock to an unsuspecting crowd. Arguably one of the lighter bands playing The Underworld, Beasts manage to maintain a strong crowd as they gloss over new riff-monster ‘My Girl Is A Serpent’ and dig into the old melodies from ‘Shades of Blue’. ‘Crying Blood’ offers a softer, much tamer side to Beasts that gives the band a whole other dimension. It’s only a matter of time before they take over the world.

Four guys from Burton-on-Trent play venomous punk with a vengeance. Max Raptor have been playing shows – with a variety of different members – since 2006 and in that time they’ve perfected the craft of putting on a f*cking great live show. The pounding drums of ‘The Great and the Good’ and eruption of bass and guitar at the start of the set initiates a ludicrous response from the crowd that builds into points of complete insanity. Wil Ray does his usual aggressive finger pointing and shouting until he’s blue in the face, whilst Matt Stevenson and Ben Winnington participate in synchronised jumping with such energy that it infuses into the audience. Final tracks ‘England Breathes’ and ‘The King is Dead’ mark the end to a phenomenal performance that can only be shown the due respect it deserves through a crowd surf and a stage dive (yes, we’re guilty).

No band suits Camden Rocks more than Turbowolf. Embracing their exuberant sound, indifferent live performances and insane riffs – Turbowolf are a perfect fit for a Camden crowd. The queue for Turbowolf at The Barfly was humongous as a result of the release of their exceptional new album Two Hands… so we sneaked in round the back. And its good job we did because they played a killer set. Fluctuating between tracks from Two Hands and their self-titled debut album released back in 2011, it’s clear that Turbowolf have developed a strong and dedicated fan-base. The beefy riffs of ‘Rabbits Foot’ and ‘Solid Gold’ provoke an animalistic response from the crowd and golden oldie ‘Let’s Die’ endorses a furious head-bang. The incredible ‘Good Hand’ (normally featuring shouts from Tom Hudson from Pulled Apart By Horses) made an appearance, leading to another guilty Raw Meat writer (myself) crowd surfing and stage diving – again. One day we’ll learn (we probably won’t). With every live performance, Turbowolf prove why they’re one of the best British rock bands on the planet, and their set at Camden Rocks was no exception.

One of the bands we wanted to catch at Camden Rocks were London rockers, Red House Glory. We managed to have a chat with them after their set to see what we missed.

Raw Meat: How was your set at Camden Rocks? Did you get a good reaction from your most recent track ‘So Easy’?
Red House Glory: It went really well! The turnout was great and we had a lot of fans there. We played ‘So Easy’ last and it went down really well. We’ve slowly been bringing it into the set over the last few shows.

Did you manage to catch any bands at the festival?
We missed Beasts unfortunately, but we saw Dolomite Minor and they were amazing.

Are there any bands that you wanted to see at the festival but missed?
We really wanted to see Demob Happy but we missed them because they were on at the same time as us!

Have you got any-more festivals or gigs coming up this year?
We have a few coming up and some yet to be announced. The next show is for ‘This Feeling’ on June 27th at the Amersham Arms.

What can we expect form your upcoming EP?
The new EP is a development and continuation from the first. The songs are really strong and we put a lot of work into the recordings and writing – we’re really excited about this one. From the tracks to the artwork (by Joe McCrae), it’s all come together really well and we can’t wait for it to come out on June 27th.