We met Deathbeams recently when we were DJing at Roadkill - a night they played - and were instantly blown away by their strength of their riffs, vocals and vibe. 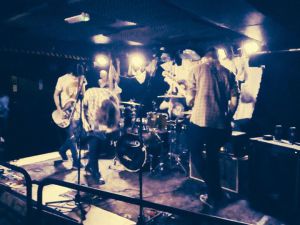 We met Deathbeams recently when we were DJing at Roadkill - a night they played - and were instantly blown away by their strength of their riffs, vocals and vibe.

They're an unassuming bunch, but once the music starts they're transformed. Their grungey riffs and swirling bass lines are sure to hypnotise.

Tell us about your local music scene; what’s your favourite local venue, are there any record labels or stores we should look up, what’s the scene like where you’re from?
Deathbeams: Well we are from West London where musically it's pretty dry. I think the closest record store is in Kingston so we mainly see and play gigs in other area's of London, especially East.

Name one track/band that you love from the past.
Kyuss have big riffs and all things good, they're a big influence to us as a band.

Name one track/band that you’re loving right now.
Pretty much anything by the Growlers has been good so far, they are my current go to band.

Name one track/band that you think we should listening out for in the future.
We played with a band called Gang the other night and they we unreal. Rad vocals, psychy riffs and just great guys.

What are you up to now?
We just released a new single called 'Mud' which we recorded with Theo Verney who is the dude. We're well proud of it.

What can we expect from you next?
We are trying to gig as much as possible and hopefully getting another single done later this year.

We spoke to Gravey to get the low down ahead of their gig at our very own Halloween party with Roadkill Records this weekend.