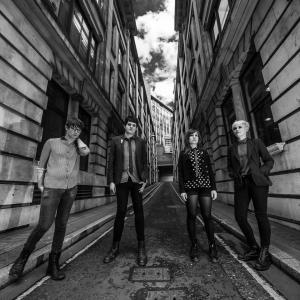 They're powerful without distortion and their clipped bass lines & drum beats give them an air of understated surly-ness. Their debut album Desperate Journalist is out now digitally and will be released on CD and vinyl 26.01.15.

Tell us about your local music scene; what’s your favourite local venue, are there any record labels or stores we should look up, what’s the scene like where you’re from?
Desperate Journalist: Sadly London is going through a pretty bad patch of venues being shut down left, right and centre. One of our favourite places to play and see gigs is the Buffalo Bar in Islington which has always offered the chance for a wide range of small/ unsigned bands (such as us) to get decent gigs without backing or any pay-to-play bullshit, and it's being closed down at the end of the year. Madame Jojo's, where I and countless others have been introduced to a tonne of new bands at White Heat, is going too. We like Power Lunches as it's strongly DIY-focused and The Lexington with its eclectic programming - both of which thankfully seem to be sticking around.Record label wise - obviously Fierce Panda who are releasing our record are an institution and have been "one of the good guys" for twenty years, and Upset The Rhythm and Milk Records are super cool too.

Name one track/band that you love from the past.
'The Word Girl' by Scritti Politti is an incredible song - super commercial, super precise Fairlight reggae-pop which talks about the false and damaging idealisation of femaleness in music and relationships(!). Scritti are mostly critically acclaimed for their early abrasive post-punk stuff but I like their really shiny mid-late eighties records best - it feels really subversive, all these quite complex and arresting philosophical ideas wrapped in seductively sugary pop music.

Name one track/band that you’re loving right now.
Honeyblood's 'Biro' is the last single I heard on the radio and really loved - Stina Tweeddale is very good at writing these swoony, chiming "mid-fi" songs which manage to combine a real directness of lyrical message/ emotion and a satisfying, slightly odd sense of melody. It's a really beautiful song. Speaking of beautiful actually, the new Mogwai single is stunning.

Name one track/band that you think we should listening out for in the future.
I'm really looking forward to whatever Parquet Courts do next - they are so smart and weird I'll probably love whatever it is. The best new band I've seen recently is Ravioli Me Away; brilliant messthetics-ish awkward but melodic post-punk.

What are you up to now?
Having finished the first album we've started working on the next one!

What can we expect from you next?
We're playing in Nottingham at the Chameleon Arts Cafe on Saturday 13th December, then officially launching our album on the 22nd of January at The Lexington, after which the vinyl and CD will finally be out.

Featured image by The Chaos Engineers.