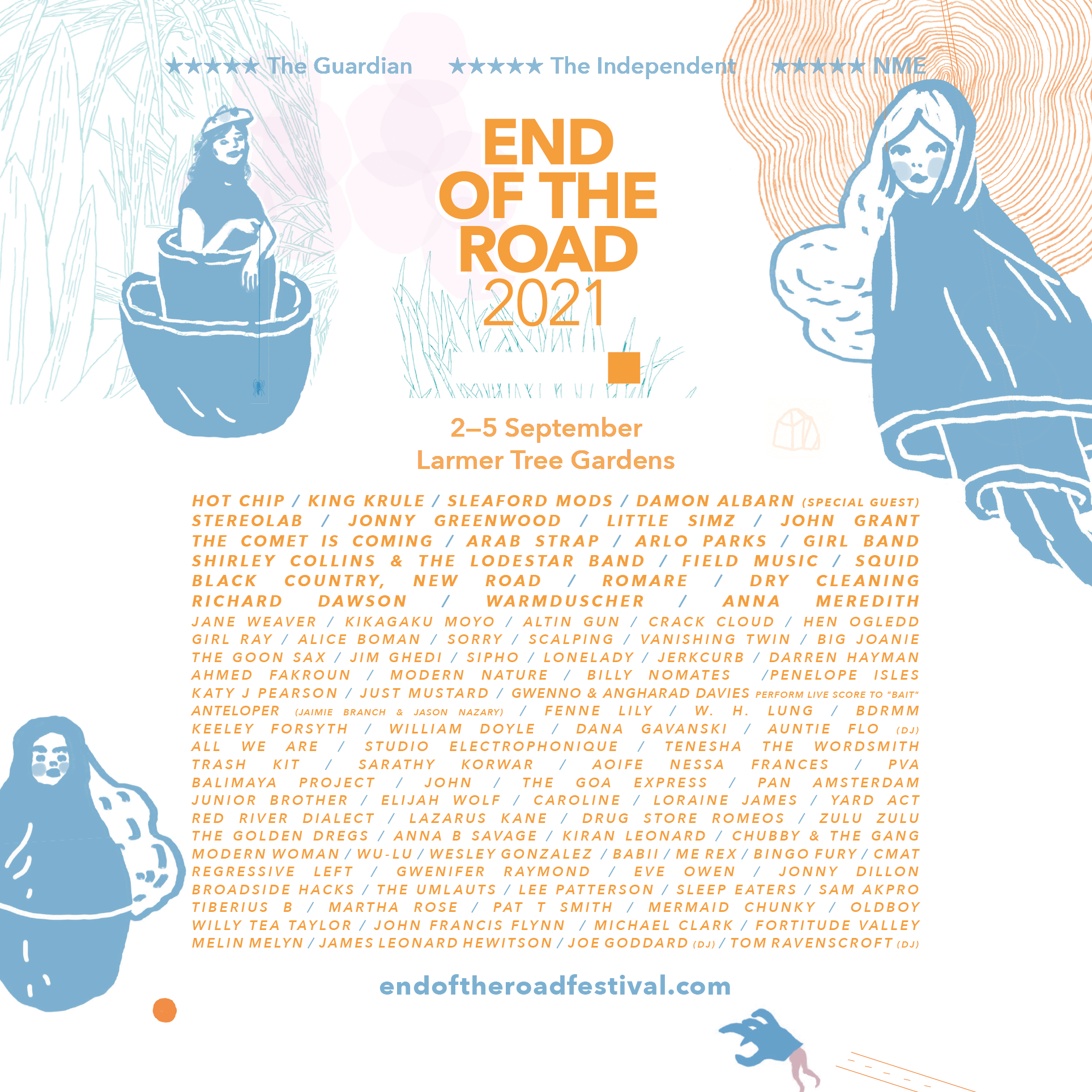 I’ll be honest with you, it’s been a while since I’ve been to a festival. Quite a while in fact. Benicàssim 2010 was the last one. Tears filled my eyes as I watched Peter Hook play the whole of Unknown Pleasures. Totally oblivious to the deep and personal battle my friend faced, barricaded in a portaloo, fighting deeply introspective, ketamine fuelled, warfare. As Charlie Dickens likes to say the morning after, ‘It was the best of times, it was the worst of times.’

So, when the opportunity to go and review End of the Road came around, I grasped the chance gently with a lukewarm hand. Four days of sunshine (so the always reliable UK forecast tells me) over in Larmer Tree Gardens, with about as varied a line-up as you’re likely to see. Here’s our recommendations for the weekend ahead.

Crack Cloud (Sunday, Garden) started as a healing mechanism for its members who met through a variety of drug addiction and mental health programmes, both participants and support workers. Alongside its seven core members are a variety of multimedia artists, so who knows what visual treats their set has in store. Sharp guitars and jagged drum loops bring a Gang of Four-esque post punk deliciousness, thickened up with a whole mess of synths and other magic.

The tongue-in-cheek Leed’s four-piece, Yard Act (Sunday, Tipi) have attracted a lot of attention despite their few releases to date. Imagine Gang of Four, fronted by Mark E. Smith. I know I’ve mentioned them twice now, but A) I’m unapologetic for my lazy journalism and B) It's accurate. One not to miss!

Balimaya (Friday, Woods), or ‘essence of kinship’, are a jazz big band, dripping with afro/latin influences. Led by percussionist Yahael Camara Onono, they are sixteen piece strong, so expect a big big sound. Punchy brass and more drummers than is legally considered the safe limit for one band. Definitely one to loosen your hips to.

An unusual lineup of drums, bass and violin gives Pozi (Saturday, Woods) somewhat of a unique sound. Relentless drums and bass, with spoken vocals. I won’t mention Gang of Four again, promise. They provide a solid base for Rosa’s discordant violin. The result is both unsettling and mesmeric in equal measure.

At this point, a band which doesn’t require much introduction. Sleaford Mods (Saturday, Woods) are the epitome of sticking to your guns and doing what you believe in. Expect as much attitude as can possibly exude from the most paired down live setup you’ll see. Two blokes, a laptop, a mic and a can of lager. Driving basslines and scathing social commentary. Not just a festival must see, but a bucket list worthy addition.

A late addition to the lineup, Damon Albarn (Friday, Woods) is listed alongside a ‘special guest’, which is pretty much any time he plays a set, regardless of which incantation you see. Expect a more stripped back sound than you’d get from his bands, sometimes channeling his inner Enya. I would expect the special guest to be long time collaborator and Gorillaz bassist, Seye Adelekan, but with contacts like Albarn has, anything is possible.

‍‍Returning to End of the Road this year are 2019 favourites, Squid (Saturday, Garden), kicking off their headline UK tour. A band I’ve been desperate to see live since gigs were a thing again. Their jazzy, punky, chaotic noise is surely something best experienced live. I can’t wait for this one.

My pick of the weekend. Not to be missed. Paranoid London and Fat White Family’s steamy one night romp ended in the hirsute offspring which is Warmduscher (Friday, Big Top). Disgusting bass tones, wild synths, tiny moustaches, all dripping in sleaze. What’s not to love? We caught up with the diamante geezer himself, Clams Baker III, to find out who he is most looking forward to this weekend.

“Sleaford Mods - A band I’ve wanted to see live for a long time as I’ve always loved what they say and how they sound when they are saying it, especially with a bunch of screaming fans.”

“Yard Act - I discovered them through working with Ryan on a poster for our live show at EartH. Then I connected the dots on the band and love everything about them. Looking forward to catching them early on before they’re too big to catch.”

“Little Simz - I always loved that song 'Boss', so would be great to see her perform it live and also whatever else she is up to.”

So now you know who’s playing and what to expect, you don’t even really need to actually bother going, but you probably should anyway, just for something to do really. Gets you out the house for a bit, doesn’t it.