This all girl rock band recorded their smashing debut Rips in the spring of 2014 within the space of just two weeks and it's set for release 13.10.14 on Merge Records. 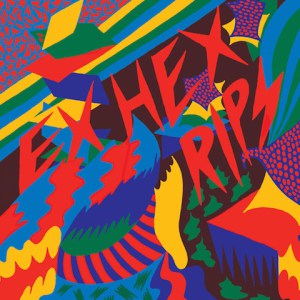 This all girl rock band recorded their smashing debut Rips in the spring of 2014 within the space of just two weeks and it's set for release 13.10.14 on Merge Records.

If you’re looking for something new, fun and exciting then look no further. Ex Hex's debut album Rips is bursting at the seams with unique rock n roll that’s ready to add some colour into a flavourless music scene. This is full on fun from start to finish. ‘Don’t Wanna Lose’ has the funkiest bass line, and great riffs that you can’t help but shake your hips to (which is something you'll find yourself doing to every single song on the album). ‘Beast’ is the most thrilling and exciting track on Rips, with its captivating hooks and sultry vocals from Timony, enticing the listener in. Even the more relaxing, less party-pumping songs on the album, like ‘How You Got That’ and ‘Hot and Cold’, still have that element of post-punk fun that makes this record such a delight to listen to. The drums are soft but by no means unimportant. The consistent sound of the cymbals seem to add a glittery rock effect to each song on the album.

Timony’s mature, yet still pure vocals are strong throughout the album and add to the picturesque visions of someone in a swing dress dancing around a record player in the sixties to the flirtatious hooks of Ex Hex. The last song on the album ‘Outro’ is the perfect ending to a wonderful album. ‘Outro’ is chilling and quirky, acting as a reminder to what Ex Hex are all about – being different and being proud of it. The change in tempo at the end is exactly what you need after such a fun-filled album and makes you question what the next record might be like.

Ex Hex are retro at its finest. It’s as if they’ve been sent here from the past to remind everyone what good music is – and let’s face it, with some of the stuff that’s being churned out on the radio, everyone needs a reminder of what true and honest music can really sound like. This whole album consists of songs that have clearly been well thought-out and are well written. It’s so refreshing listening to something where it’s so evident that a lot of effort has been put into making each song into the best it can be.

This is the kind of album that you listen to consecutively for several months, forget about it and then stumble across a few years later and question why you ever stopped listening to it. Do yourself a favour and start that process now.