FALLS are what you should be looking for in a band. They’re a mash up of several different genres (the good ones) and they create some epic, mind-blowing music. 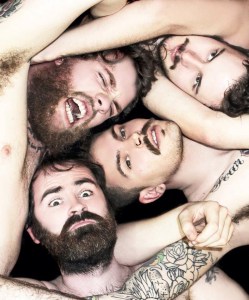 FALLS are what you should be looking for in a band. They’re a mash up of several different genres (the good ones) and they create some epic, mind-blowing music.

FALLS have got an undeniable punk element, some feisty alternative rock and a little bit of math rock that’s sprinkled with some incredibly heavy, yet pop-infused riffs. Not only do they sound fucking awesome on record, but they’re one of the most exciting live bands around at the moment. If you’re going to do anything worthwhile with your day; check these out and get yourself to one of their gigs ASAP.

RAW MEAT: Tell us about your local music scene; what's your favourite local venue, are there any record labels or stores we should look up, what's the scene like where you're from?
FALLS: We come from a small area in North Wales called Deeside (not D-Side). Years ago we all used to congregate in in the back of a social club, where we spent out formative musical years hamfisting our way through songs about girls, drinking warm Fosters and playing the same Biffy Clyro song ('Saturday Superhouse') over and over again. Nowadays most bands play out of town and the scene has sadly slid on its arse. But, there are some great bands kicking about such as Secateurs, Blood Lips and Doppelganger to name but a few.

Name one track or band that you love from the past.
Dr. Dre's 2001 is a tour essential.

Name one track or band that you're loving right now.
Taylor Swift's 'Shake It Off'. Obviously.

Name one track or band that you think we should be listening out for in the future.
Aeroplane Flies High. It’s fucking great.

What are you up to now?
We played a bunch of shows over the summer that involved us standing on people and we've written a bunch of new stuff, which leads us neatly to...

What can we expect from you next?
Our next single, 'Sin Digger' will be out on Death By Records as a digital download on 24.11.14 [today!], along with some live dates: