As veteran Field Day-ers, we're well aware that absorbing more than one day at a time of that much nonsense is too much for one writer, so we split it. Charlotte tackled Saturday. 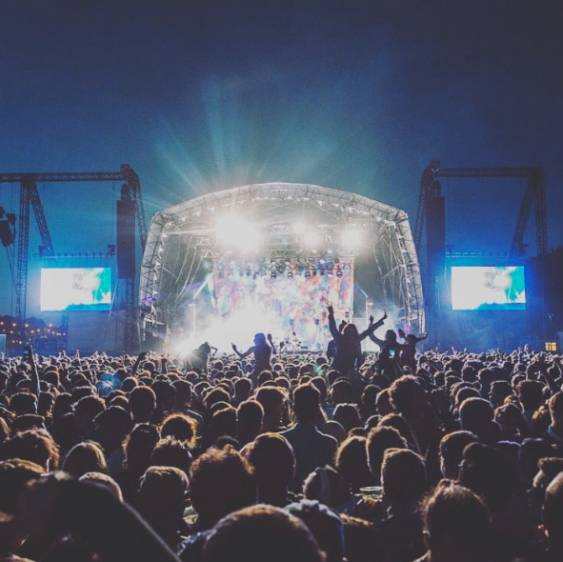 As veteran Field Day-ers, we're well aware that absorbing more than one day at a time of that much nonsense is too much for one writer, so we split it. Charlotte tackled Saturday.

What did I learn at Field Day? One: Don’t go against your instincts and wear sandals to a festival you mug. And two: Leave any expectations you have of an act at the entrance to the stage. Despite the torrential downpour that inevitably left me drenched, Saturday was great. Dance and house music blended with alternative rock – something for everyone is an understatement.

With an early slot on a particularly dreary day – it’d be reasonable to think that LUH.’s audience would be small and scattered, but this wasn’t the case. LUH emerged from the stage in a technicolour fog with their first track ‘I&I’. The intimate crowd grew as their set went from strength to strength, and the aggression of songs like ‘Unites’ and ‘Beneath The Concrete’ kept the audience hooked. The passion LUH have for their music comes across so strongly when they perform, and despite Field Day being one of their first live performances under their full name Life Under Heaven, (a post-project of indie rock band Wu Lyf), LUH have cemented themselves in the minds of festival goers.

Deerhunter’s front man, Bradford Cox kicked off their set with a classic twist and shout dance. The crowd egged him on with warm cheers and it gave a promise for their unique performance. They opened with 'Rainwater Cassette Exchange' a classic psych-indie tune infused with Kinks’ spirit. Cox’s awkward yet cocky stage presence is one of the most lovable aspects of their live shows. They played other crowd pleasers like Fading Frontier’s ‘Snakeskin’ and ‘Living Your Life’, as well as exhibiting their earlier work such as ‘Cover Me (Slowly)’ and ‘Agoraphobia’ from 2008’s Microcastle.

Boy Better Know’s Skepta, caused an eruption in Victoria Park. Despite an interfering sound system due to the muggy weather – Skepta’s talent couldn’t be held back by mere technical issues. As well as his own classics including 'That’s Not Me', the rapper paid dues to his BBK routes with ‘Man Don’t Care’, a track by brother and grime legend JME. The crowd’s reaction to his iconic set-list solidified the longevity of grime as a genre that's not finished just yet. 'Shutdown' caused an expected uproar, the crowd reciting every word. This wasn’t a bunch of individuals watching their favourite rapper, this was a rowdy collective.

James Blake’s emotive new album The Colour In Anything has gained enviable critical critical acclaim since it’s release in May. I’d been yearning to hear his ghostly voice for years so when Field Day announced him as their Saturday headliner I was thrilled to say the least. I imagined his closing slot to be a chilled affair to wind down with – but Blake blew any expectations I had into the dust (...mud). His opening track ‘Radio Silence’ was a classic example of his signature stirring voice; his lyrics gave his electronic dance roots a deeper meaning, and as we moved and swayed you could feel that sense of meaning in the crowd. Tracks like ‘Love Me In Whatever Way’ and ‘Timeless’ showed the evolution of Blake as an artist, but he hasn’t strayed too far from his ‘Limit to Your Love’ beginnings. His luxe voice echoed into Victoria Park with an intricate heartbeat of synths as he played ‘Life Round Here’. I was a little gutted I didn’t get to hear my favourite slower songs like his cover of Joni Mitchell's ‘A Case of You’ or his own ‘f.o.r.e.v.e.r.’, but they wouldn’t have worked with the upbeat set-list or the dynamic atmosphere. All in all, it was an unforgettable performance to treasure.

Toronto outfit Dilly Dally are well known for their raw performances and hot-blooded lyrics. It amazed me how they managed their angst-y defiant nature in such a way as to cause as much of an emotional stir as a soft piano solo. My favourite tracks from their performance had to be ‘Get To You’ and ‘Desire’, but as I started to lose myself in Dilly Dally’s set, a guitar rift plucked me out of my trance. “I know this…”, I thought as front woman Katie Monks uttered those nine words you might not expect a band like Dilly Dally to shriek. As the chorus kicked in the audience dove into hysteria, as we yelled, “I was running through the six with my woes” in unison with the band - all in complete disbelief at what we were a part of. Their colourful interpretation of 'Know Yourself' by Drake is their party piece but still manages to give solid proof of the band’s artistic diversity; Dilly Dally’s unapologetic personality woven into every chord.

Finally, we come to Yeasayer. A band whose previous performances have been described as similar to a 'bouncing-ball”, and frankly I couldn’t agree more. The rain affected a few sets at Field Day and Yeasayer was sadly one of them – fans were hollering for them to turn the vocals up as even from the front their voices were being lost. It was such a shame as Yeasayer’s trademark harmonies are what many were most looking forward to, but they powered through. ‘I Am Chemistry’ is the debut single from their new album Amen & Goodbye and it received a warm reception from the Eat Your Own Ear’s stage. The band’s playful nature was prominent throughout the set and Yeasayer used this as ammunition to keep the crowd engaged. This wasn’t entirely necessary though, as their genre-bending repertoire kept the audience dancing for their full slot. ‘Silly Me’, ‘Ambling Amp’ and ‘Henrietta’ were undoubtedly highlights of their set at Field Day.