Each morning we’re bringing you the news, views and events from the night before at Flufferfest 2015. The fact that we're even awake is a miracle so please appreciate our efforts. 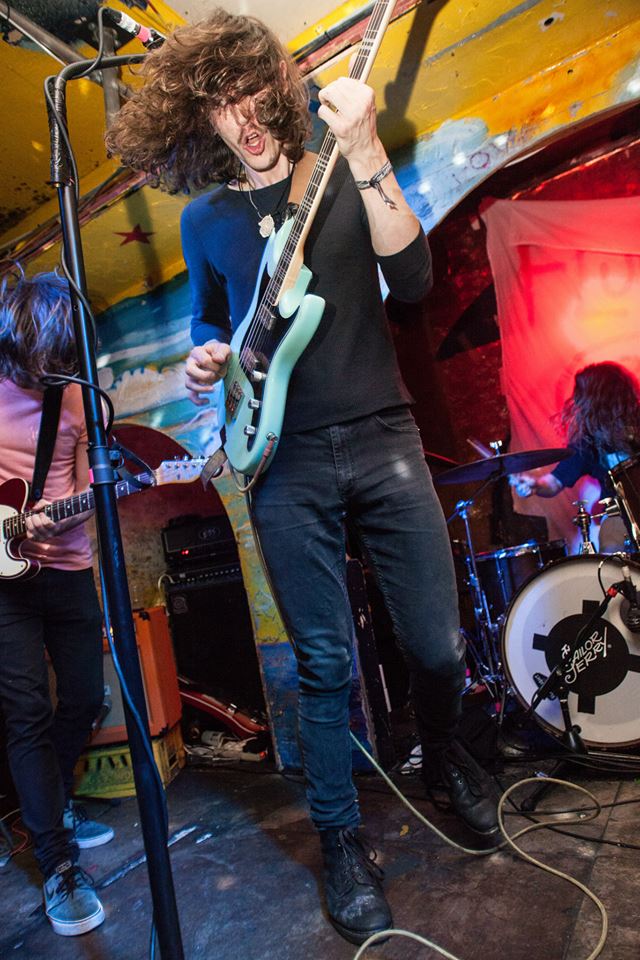 Each morning we’re bringing you the news, views and events from the night before at Flufferfest 2015. The fact that we're even awake is a miracle so please appreciate our efforts.

Day two of Flufferfest was immediately a much heavier affair than day one, with the classic seventies punk raging of Safari Suite starting the day. Reminiscent of Germs, these four guys have heavy riffs, group vocals and great bass lines; they blew the cobwebs away, that's for sure.

Next up were the deeply dark Cannibal Animal. They thrash, scream and feedback, but all with a slightly unnerving fluctuation between control and completely losing it. There are elements of noise punk, post punk and even moments of shoegaze in the mix.

Bare Pale are an amazing alt-rock band. There. I said it. They bring the eerie floating riffs of Sonic Youth together with distant vocals and bass lines that sound like you're listening to them played back slowed down. Their heavier moments are a wash of fuzz and bass/ guitar interplay. A fantastic band.

By the time Baba Naga came onstage things were heating up. Trippy guitar solos, psychedelic vocals and tribal drums lead to a shattering set. They're also definitely a band for the guitar nerds out there; pedal boards with every effect under the sun and a fretless electric guitar that resembled Frankenstein's monster put to full spaced-out solo use.

Next band of the day, Vulgarians sound big. The vocals scream and shout over threatening, chugging bass lines and screeching, swirling guitars. Their songs are too long and have too much going on to be classified as punk, but there's certainly some angry punk snot behind the drum beats. Cool songs played with great energy to a slightly waning crowd.

The crowd weren't waning for long though as the striking, leather-clad Terminal Gods took their turn. Their rock is hard, sharp and delivered with a genuine and obvious love. You'd be forgiven for hearing some Joy Division in their robotic rhythms, but there's more of the spectacle of Nick Cave and even (at a stretch) Bowie if you dig deeper. The two guitarists weave riffs together as the bass mirrors the insect-click tight drums. Unexpected and heartfelt dark-rock.

While we grabbed our beers and waited for our ears to stop ringing the Shacklewell Arms was slowly being filled with smoke, preparing for one of the most visual apocalyptic punk performances I've ever seen. Dressmaker requested no lights on stage except a strobe, the room was so full of smoke that you could barely see the stage, and the singer went from hanging from the lighting rig to shoving members of the crowd to the ground - he was an unpredictable element to say the least. The music hung on the frantic bass lines and roaring drums while the guitarist's anti-riffs felt as haphazardly noise-punk as the vocals. As their set drew to a close and the bassist and guitarist left their instruments with members of the crowd and stumbled out we were left with vocal moans, cymbals crashing, and the knowledge that one of the heaviest and most magnetic bands at Flufferfest were done. My personal highlight was their absolutely beautiful cover version of 'Be My Baby' by The Ronettes.

With inaudible shouts over chunky layered riffs and the hardest working rhythm section of the weekend, USA Nails gave punk a shot in the arm. Heavy, rocking and, "averaging at just over two minutes a song" they absolutely nailed their set. With one album out and another coming up there are a lot of reasons to check these guys out. Also they had the best terrible stage-chat that I've ever known.

It was between USA Nails and Kagoule that Fluffer's first born sons Love Buzzard were supposed to play, sadly Al (drummer) was stuck in Berlin. I was told in an official statement that he was either in hospital or prison, but he's made it here today in one piece so perhaps it was neither (or both?).

If I tell you Kagoule are the Pixies for a new generation you might call me bold, insane, or a word with asterisks in it, but with the bass line/ guitar interplay, the use of dual vocals, and above all the impeccable song writing, I came out of their show with no other words to describe them. Two separate people told me they were their favourite band of the weekend so far. Kagoule combine heavy and light, bored and aware, understated and overt. It was a great show and I'm over the moon I was there. Go and listen to this band.

Headliners and Raw Meat favourites Demob Happy always bring the party. You just can't keep such good tunes down. Their fuzzy, energetic rock drags guitars riffs and swinging distorted bass through catchy and joyous musical mud. They're also a band that's steadily getting more and recognition for their addictive grunge influenced creations (listen to the completely wonderful 'Young & Numb) so it's worth catching them in a small venue before those days fall far behind them. I cannot celebrate them enough.

Today (Sunday) at Flufferfest the lovely Fluffer team are selling raffle tickets in the ticket/ merch area. There are loads of awesome prizes, but none so incredible as the below. The amazing artist that does all of Fluffer's artwork, Russell Taysom, has decorated a jacket that YOU could win (if you're here, buy a ticket and are really lucky).