The weekend of Handmade Festival 2016 Leicester was the epicentre of the universe, about to play Manchester United with a chance to win the league. No-one knows what happened next. 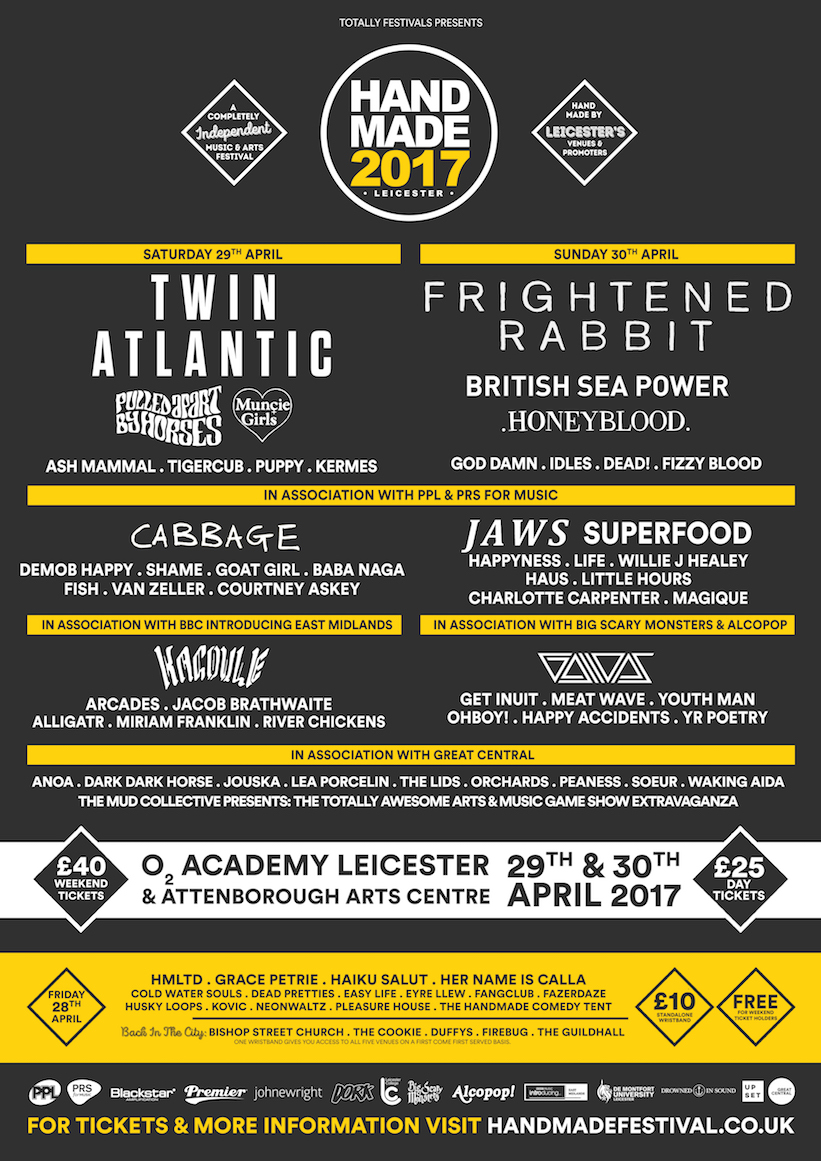 The weekend of Handmade Festival 2016 Leicester was the epicentre of the universe, about to play Manchester United with a chance to win the league. No-one knows what happened next.

A year later and once again Leicester are rewriting the rules, with the idea of being bigger than expected rubbing off on the city's music scene. Handmade Festival, now in its fourth year is a multi-venue indoor festival that brings the town’s art, comedy, film and music together over three days. We thought we'd scoop together a handful of bands that we absolutely recommend you check out.

Playing the new Friday night fringe festival, the three-piece band from Nottingham are leading the charge when it comes to ambient post-rock. They’ve just putting the finishing touches to their self-produced debut so expect plenty of new material. And they'll no doubt have their usual rabble rousing Nottingham fan base travelling across in their droves to show their support for one of the most exciting bands to come out of the city in recent times. To celebrate the announcement they’ve released 'Havoc', the first peek of their debut album.

We caught this eclectic four piece at a recent BBC Introducing show and they blew everybody’s right legs off. A mysterious band to say the least, they're playing home turf and if you’re a fan of Jungle and Grizzly Bear then make sure you check them out. We’re positive they'll be massive very soon.

They released a statement telling The Sun to, ‘Fuck off’ when they were featured as a 'one to watch' band by the cartoon villain red top. Fair to say that these guys are fun to watch, their name is as outrageous as their live shows and this will easily be the best gig of the weekend if you enjoy sweaty, dirty and backs to the wall punk. With songs like this you can see why they’re being hailed as the next best thing to Fat White Family.

Nottingham is the bomb right now and Kagoule are the detonator. Their debut was stunning and like any band destined for the heavy lofts of greatness, their second will be even better. They’ve previously supported Spring King and they will no doubt be showering Leicester with their deranged and eccentric take on grungy pop. Headlining the second stage, we're in no doubt that they will absolutely kill it.

The b-towners have been working on their second full length, and despite no money, no label and not a pot to do anything in they’ve persevered and are ready to drop their slacker Brit-pop magic all over us. If recent single, 'Double Dutch' is anything to go by then we’re in for something special.

A big favourite in the Raw Meat ranks, God Damn! are raucous to say the least, having supported the likes of Foo Fighters, Red Fang, Trice and more. The punk trio from nearby Wolverhampton return to the midlands with their beloved and unrivalled noise. Expect ringing in the ears.

What an absolute catch for Handmade Festival. BSP are quite simply, one of the best British bands ever. Never to be pigeonholed, the eclectic Brighton wanderlings will put a smile on anyone’s face. Their merchandise alone is worth the entrance fee, consisting of the best pun-affiliated crap you can find. A band that constituently produce indie-pop of the highest calibre; they will bring the house down.

The Scottish duo have quickly made such a huge noise that their high spot on the bill is more than justified, even in such a short time. Promoting new album, Babes Never Die, out on the much loved and renowned Fat Cat Records, expect one of the most melodic, hook-laden sets of the weekend.

The fact they rank higher than "pulled pork" on a Google search says a lot about the meteoric rise of PABH. For fans of Biffy Clyro and Muse, PABH return after a lengthy couple of years touring their chaotic live shows across the world. Expect nothing but high-octane delivery and a performance that will leave you exhausted, exhilarated and ready for your bed.