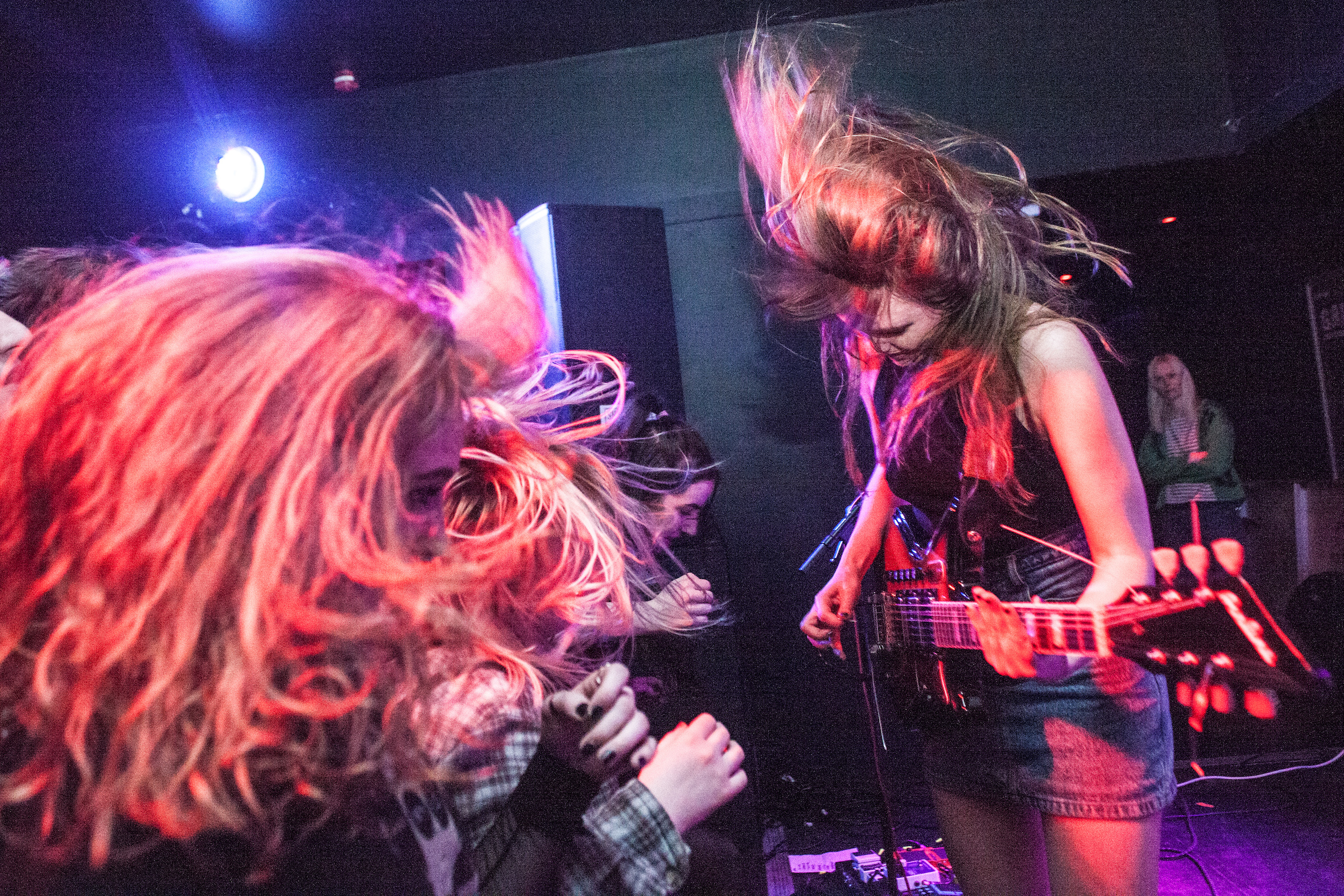 In this time of celebrating women, finally starting to give them the credit they deserve, and continuing the talk on discrimination and respect, I’d like to shine a light on some female promoters who having been working their arses off to get female musicians heard.

The industry is still very much dominated by male promoters who are shown a lot more respect and admiration for what they do, despite some badass women who are out there working twice as hard while fighting the patriarchy (a story as old as time). Recently, booking ‘female-fronted’ bands has almost become fashionable. Of course, the fact that these women are being booked is an achievement in itself, but I feel this isn’t always done in a way that genuinely supports equality in the music industry, something that takes a lot more than booking a ‘female-fronted’ band. Support is about creating an environment where female musicians feel safe and respected. There isn’t one way of doing this and several different female and non-binary promoters are achieving this in their own ways.

We Can Do It

WCDI has always been about creating line-ups that are gender equal. I always try to book a good ratio of men, women, gender neutral and transgender. For us personally it’s about seeing all bands as equal and wanting to give women the same opportunities to show the industry that they are on the same level. And in our magazine we tend to focus a lot more on championing the female musicians we love, as there are more than plenty of rock magazines full of all-male bands; we want to give everyone else the exposure they deserve.
Previous bookings: Calva Louise, Valeras, The Pearl Harts, Madonnatron, Abjects and Table Scraps.
Previous features: Estrons (RIP), LUCIA, Thyla, Nova Twins

Polly Miles from Acid Box Promotions in Brighton is an absolute queen booker. They’ve been going since 2013, unearthing some of the best underground garage rock, psych and post-punk bands around. Polly is an incredible host, activist and a vital brain in the industry. And Acid Box is the most welcoming and exciting promoter in Brighton, booking a great mix of genders.
Previous bookings: Pigs x7, Wand, Yuck, Abjects, Juniore, Kikagaku Moyo

Lyndell Mansfield is DIY punk mother to us all. DIY Thursdays was started in 2015 and is her own creation of a fun-filled riot, laced with love. There isn’t another night around like this and bands are always raving about what a great night it is to play. Dress up is very much encouraged and everyone is welcomed with open arms to join the party.
Previous bookings: God Damn, Girls In Synthesis, SULK, Yassassin

Girls Go BOOM have stolen my heart, for sure. Founder, Lindsi Dendauw started the company in 2016 in Belgium simply to put girls on stage. They have such a great ‘don’t give a fuck’ attitude, but with a very friendly, supportive and approachable manner towards women. It’s always very clear that they want to do as much as possible to help women of all areas in the industry; including writers, photographers and DJs. They regularly put on workshops as well as a load of great gigs full of female talent. Their roster includes multiple British bands who they enable to get their first taste of playing around Europe, always well looked after
Previous bookings: Dream Wife, L.A. Witch, PINS, Death Valley Girls, The Coathangers

Georgia Hardy, lead booker at Old Blue Last, is one of the most hard working and ambitious women around. Her own promotions company Split Milk, which she started in 2016, hosts a multiple of genres including psych, dream pop, jazz and electronic. Georgia also booked DIY’s ‘Hello 2019’ show at Old Blue Last with a bunch of exciting buzz bands and artists.
Previous bookings: Laurel, Breathe Panel, Pip Blom, Methyl Ethel, FUR

Grace Allen founded Grandma in 2017, formerly known as TUSK. Grace’s line-up’s have always been on our radar, they’re creative, with her finger fully on the pulse of upcoming bands. The shows are mix of electronic, alt pop, psych and garage rock. Anything experimental will usually catch her eye.
Previous bookings: Goat Girl, Sorry, Catholic Action, The Rhythm Method, The Honey Hahs

Created by Harriet Hall in 2017, the Polly line-ups have been mega from the outset. Their second ever show was with upcomers Phobophobes, and having caught Black Midi very early on, Harriet has continued to kill every show she’s put together, selling out multiple gigs and helping to create a great buzz for these bands.
Previous bookings: Phobophobes, Black Midi, FUR, Lea Dou, The Regrettes, LUCIA

Managed by the amazing team of Sophie, Dayna, Syra, Steph, Estella, Marcus, Jon, Bipasha, Sam and Sandy, Decolonise started in 2016 to support punk women of colour. One of the most vital promoters around these ladies have created a much needed environment to focus solely on women of colour in the punk scene. As well as hosting bands they also focus on and involve themselves in workshops, art and film. This is a great space to celebrate some incredible, strong women who will not stop until they’re heard.
Previous bookings: Skinny Girl Diet, Nova Twins, Vodun, Big Joanie, The Tuts

Loud Women, founded by Cassie Fox in 2015, is a promotions company with a great community feel. Not only do they run their own shows, an e-zine and releases, but they've also created a Facebook group where women, men, non-binary and transgender can all come together to discuss, promote and support equality. Their contributors have grown to around 45 people, all supporting this important message. Joining forces with America and Australia they’ve branched out across the globe to spread the Loud Women message. And their Loud Women Fest has become a great success packing out the mighty Dome and Boston Music Room in Tufnell Park.
Previous bookings: Petrol Girls, Nova Twins, ILL, Big Joanie

We Can Do It
Decolonise Festival 2019