Before we see them play LeeFest at the end of the month, we asked previous SOTW-band Peluché what the hell they're all about. 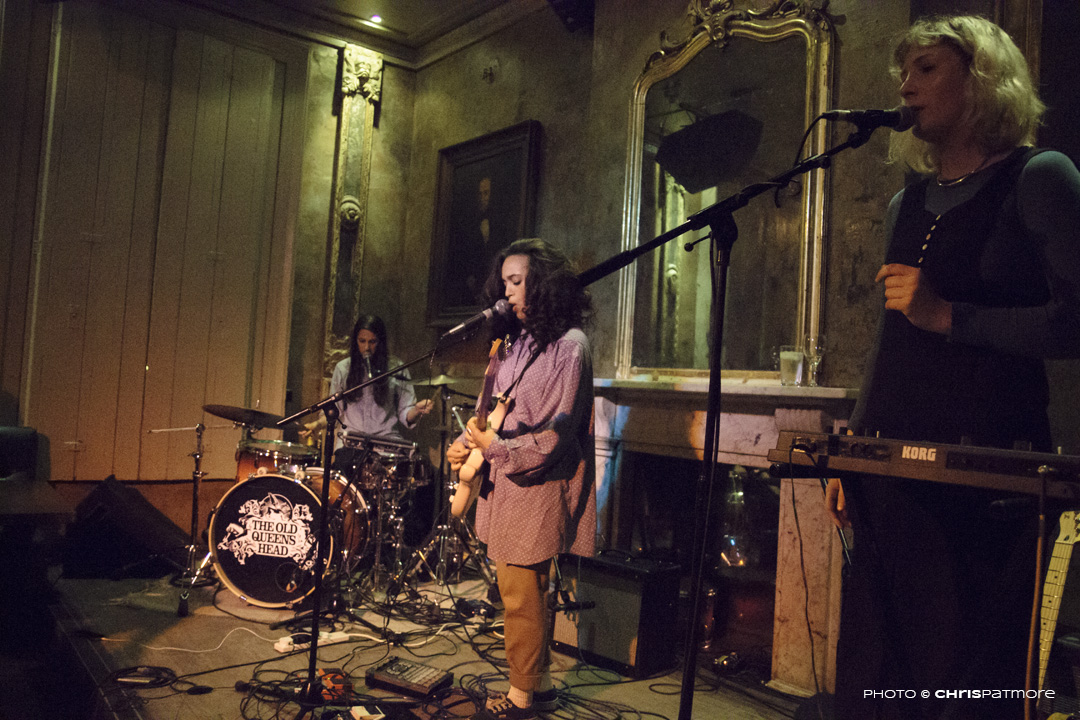 Before we see them play LeeFest at the end of the month, we asked previous SOTW-band Peluché what the hell they're all about.

London three-piece Peluché (Spanish for teddy bear or cuddly toy) are one of those hard-to-categorise bands. Even they struggled to come up with a description when asked about their sound. Their answers came in single words, "experimental", "happy", "instrumental", "mysterious", although that possibly only scratches the surface.

While most people will agree that trying to label music is something of a futile pursuit, the word that wasn't offered was "original". Peluché play Peluché music and it certainly piqued the interest of renowned producer Dan Carey, who released one of their songs on his Speedy Wunderground label, which was also included on the label's recent compilation album along with artists such as Kate Tempest and Teleman. So how did these quietly spoken young ladies get chosen to be part of Carey's project?

"Our manager sent some of our songs to Dan, because we always wanted to record something with him", said Sophie. "Then we got a call the next day asking if he could come to our gig, and then he invited us to the studio two days after that, and we recorded the songs." Amy added that although they had a few songs in mind, in the end they went for the latest song they had written. "It was sort of unfinished", continued Sophie. The ethos behind Speedy Wunderground is a fast turnaround in terms of both recording and releasing, something that doesn't appeal to everyone.

"It was really good", said Amy. "It didn't feel rushed."
"That's what we're like", added Rhapsody. "Normally we will write two or three songs every time we jam."
"And we always want to play them live straight away, which some people think is not a good thing to do because we should perfect it", continued Amy. "Sometimes it goes really well, and sometimes it goes badly."
"That may be why no one can describe us, because all the songs are different. And it's nice because nowadays everything has to be mixed so perfectly", said Rhapsody.

Sophie added that one of the things they liked about working with Dan was that everything was recorded live, and they only did four takes and added a few layers afterwards. She went on to say that Dan did all the production on the song, and as soon as he first heard it he had an idea of what he wanted to do with it. As a result, Alexis from Speedy Wunderground has mixed Peluché's forthcoming EP, which they self recorded and produced, and is scheduled for release in October.

The conversation soon moved on to the state of the music industry and the importance of trying to remain independent, without sacrificing creative freedom and still being able to make a living. "We've been talking about putting on a monthly event in a really small venue where we play and invite other bands", said Amy. "We'd charge £3 so that we can pay people because you can't keep doing gigs for free. We've done gigs for free, before." Rhapsody added, "It often ends up costing to play because of travelling with all the equipment."

The subject of the availability of music venues in London for independent artists was soon broached. With some of the city's best-known venues changing hands after corporate buy-outs, and others being shut down entirely, it seems like the lot of indie musicians is not improving. "When we started getting good gigs, we would have bands come up to us and ask us how we got the gig at, say, The Old Blue Last?" said Sophie. "You try and help out by saying who put you on, but now it seems like it's more of a closed door, so that only certain people can play these places."

For musicians, there are essentially two places to play, in the studio or on stage (and hopefully with an audience). Some prefer the solitude of recording, while others like the thrill of performing live. Almost unsurprisingly, Peluché's preference is for the studio. "I just like going into the rehearsal space and not think about anything", said Rhapsody. Sophie echoed that, adding she liked recording, listening back and adding stuff. Amy said she loved playing live also, especially towards the end of a tour. Sophie said, "It's really difficult for us because we always play for crowds that have never heard us. The only ones that have are our friends, so every time we play it is trying to win over a whole room." Amy added that they change their set so often that even if someone had seen them before they wouldn't necessarily know the songs.

In what we laughingly call Summer, it is music festival season throughout the UK and across Europe. Just mentioning Europe immediately brought up the results of the recent referendum to leave the EU and how it will most likely have a negative effect for touring bands. It also led to a general rant about the small-mindedness of the "leavers", which doesn't need to be recounted verbatim here. Meanwhile in the UK, there is no doubt that we're saturated (and not just from the inevitable rain) with festivals of all sizes and persuasions, from large and corporate-backed, to niche indie festivals that support acts like Peluché.

The general consensus on deciding which festivals to play was, "We'll take anything [laughter], but we will look and see who else is playing there." This year they are playing Latitude, Standon Calling, Leefest and Farmfest, all festivals with a generally laid back family atmosphere, as well as She's the Fest in Spain – a festival dedicated to female artists. The subject of female representation on festival stages was raised, and the conclusion was that major festivals need big-name crowd pleasers, while the smaller festivals, such as LeeFest, are more open to putting on bands for their music, regardless of gender, and also supporting up-and-coming acts.

"It's great that such places are interested in what we are doing and ask us to play", said Sophie. "We should be really thankful, when there are so many amazing bands out there."

If you want to see Peluché perform in a unique setting, then get down to LeeFest's The Neverland, 29/07/16 or, better still, stay for the whole three days - like us!