Chris Patmore tends to keep his festival activity to just one a year because: camping. And people. This year Kendal Calling's line up took the biscuit. 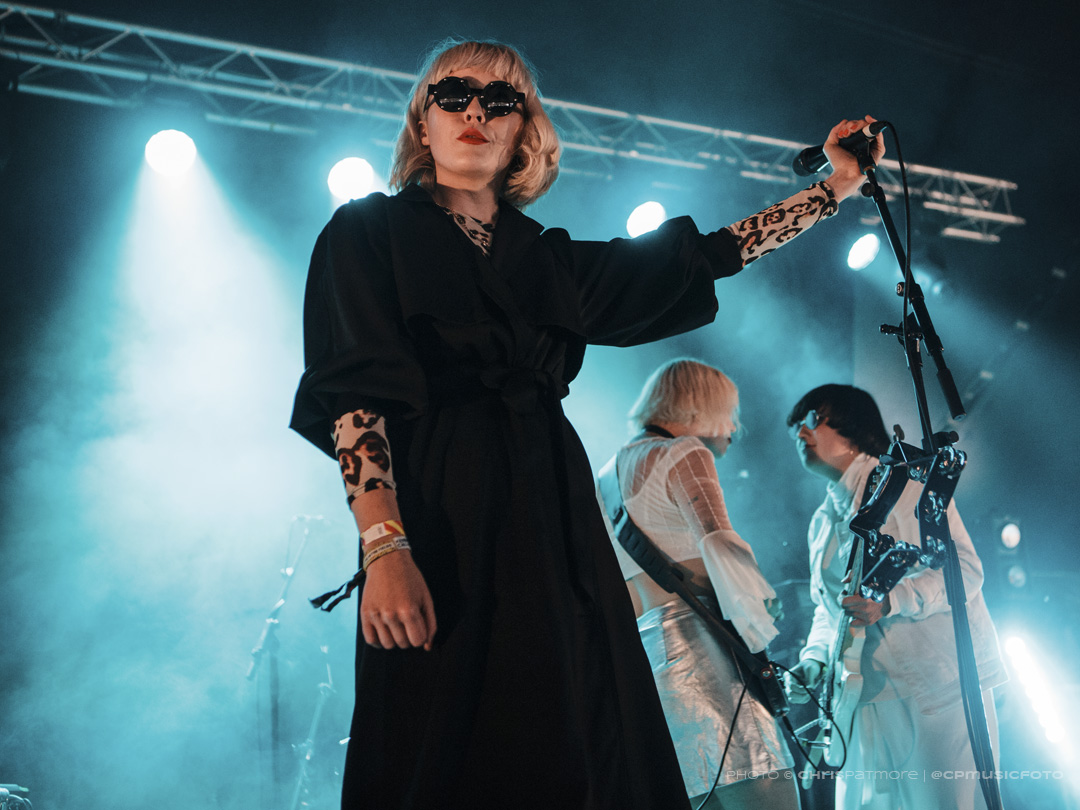 Chris Patmore tends to keep his festival activity to just one a year because: camping. And people. This year Kendal Calling's line up took the biscuit.

For the last couple of years Leefest has been my festival of choice. It is small, independent and super friendly, with loads of little indie bands that I love. And it’s pretty close to home too. For a variety of reasons, including it clashing with Roadkill Records Summer Weekender in Camden, I decided not to go this year.

I felt a little torn, because, although their motto for the last two years under the Neverland banner has been “Never grow old”, it was their first time as a grown-up festival under their new Neverworld monicker, and it had sold out too. So, I was on the lookout for an alternative, and when I heard my friends Saint Agnes were playing the Main Stage at Kendal Calling I knew I had to be there to cover it, camera in hand.

It wasn’t only Saint Agnes that were the attraction, there were other indie bands I’d photographed over the years in small, badly-lit venues that were also on the bill: False Advertising (also on the Main Stage), Yonaka, Pins, Psyence, WhenYoung, Anteros, King No One and The Amazons, to name a few.

Of course, there were the headliners and the big names gracing the Main Stage, such as The Libertines, Catfish and The Bottlemen and Plan B (appropriately stepping in for original headliners Run DMC), along with Fun Loving Criminals, and a bunch of Britpop bands such as Ocean Colour Scene, Shed Seven and James. But Raw Meat is all about the new bands, and they were to be found mostly in the Calling Out, Houseparty and Yam Riot tents, which is where most of my time was spent.

Just in case you hadn’t noticed, this summer is being described as the hottest and driest on record, and to be fair it has reminded me of my summers growing up in Australia, just a bit cooler. Typically, it had to be this weekend that the “much needed” rain had to appear. The Thursday and Friday were beautifully sunny, and sleeping in a tent didn’t seem such a bad prospect, lack of mattress aside. Then in the wee small hours of Saturday morning, or Friday night for the majority of the revellers, the rain and wind arrived, and discovering your shelter isn’t as waterproof as you’d believed did put something of a dampener on the rest of the weekend. At least I had the foresight to pack wellies and a decent rain cape.

My experience of UK summer festivals is fairly limited, but the setting for Kendal Calling in Lowther Deer Park is pretty spectacular and getting there from London by public transport (is it still public transport given that it is all privatised?), is straightforward, with a direct train from Euston to Penrith and a relatively short shuttle-bus ride to the festival site. Definitely the most relaxed way to get there, especially as the M6 was shut down because of a major incident, putting pay to a lot of punters' travel plans.

Thursday evening is an additional option to the festival, with the Hacienda Classical being the main attraction. I missed that whole Manchester scene as I was living in Italy at the time, so most of the attraction went over my head. Hooky and his signature low-slung bass was the only person I was even familiar with. But I’d only gone up on the Thursday to make sure I was all set up for Saint Agnes, whose Main Stage set was at lunchtime on Friday. I keep saying that Saint Agnes are, “the best live band you’ve never heard of”. I encouraged the other photographers there to check them out, and the small crowd of festival-goers that had already gathered in the field were soon drawn in by the band’s hard stomping rock and brilliant stage presence. It wasn’t the audience they deserve, but it was a very appreciative one, and word of mouth is a powerful way of building a fan base. Speaking with some of the photographers later, they were impressed, and one even went so far as to say they were one to the best bands at the festival.

After Saint Agnes, the rest of the day of the day was spent running between the Main Stage and Calling Out stage seeing the likes of whenyoung, Judas, Marsicans, White Lies, James, Marmozets, Catfish and The Bottlemen, and Tom Grennan. But the first act of the day was still the highlight.

Being a member of the press does come with certain little (and appreciated) privileges, such as electricity, wifi and somewhere to shelter from the elements between stage runs. I’d sorted out my weekend schedule using clashfinder.com and Saturday was looking packed, starting off with False Advertising, the young Manchester trio, who I’ve been watch grow from strength to strength, including their recent invite to play Robert Smith’s Meltdown at Festival Hall, and now on the Main Stage at Kendal Calling. Again, here is a band with fantastic rock/ grunge tunes and brilliant stage presence that are steadily building their audience through that and word of mouth. For my money, they are far better than many of the acts playing on the same stage (and much nicer people too).

Although seeing familiar acts (to me) was part of the reason for coming to the festival, seeing new bands was just as important, and the following band on the Main Stage were The Blinders, another power trio, whose set blew me away and left wanting to catch them again, in a smaller venue, and were definitely one of the highlights of a particularly strong day. Other notable acts included psych-rockers Psyence and Trampolene in the Houseparty tent, Yonaka (who I fell in love with the first time I saw them a couple of years back and are really building a solid following now through sheer hard work and great songs), King No-One and Black Honey on Calling Out, and legendary Manchester band Twisted Wheel in the very packed and damp Houseparty tent.

Come Sunday and the forecast was for rain all day, and the ground was ranging between mud and quagmire. Strangely, there was a fairly substantial crowd in front of the Main Stage for the day’s opening act, The Lancashire Hotpots, something of a local novelty act and festival regulars. Great musicians, but definitely not my cup of tea. By the time Life hit the stage, most of the crowd had dissipated, which was a shame because they are another brilliant band that know how to put on a rock show. I got the word that Vida, playing in the Houseparty tent were ones to see, and this young band certainly gave it some. I couldn’t resist catching one of the older guys with Peter Hook and The Light, and I wasn’t even much of a fan of his two biggest bands, but he sure knows some moves with a bass guitar.

The rest of my time was going to be spent in the Calling Out tent. I only went and saw Danish band Nelson Can because they’d liked some of my Instagram posts that morning, but I’m glad I did. This all-girl trio started playing to an almost empty tent, but by the end of their set they had drawn quite a passing crowd, and not of people just looking for shelter from the rain, because they were engaged with the performance. Anteros put on a brilliant show. Their music is poppier than I prefer, but there is not faulting their performance or stage craft. I see a lot of live bands throughout the year and the thing I am noticing more and more is that larger percentage of them are either female fronted or all female, and the reason is because they put on a better show, which, from a photographers point of view, is more important than how they sound.

As with all-male bands they are just as good, bad or indifferent. Gender doesn’t determine musical ability, and as the saying goes, “female is not a genre”. I’ve seen plenty of female guitarists that can outplay a lot of males, and plenty of male guitarists that, well, just don’t have the chops that they think they do. Enough of the diversion, but it seems appropriate that the next band was Pins [feature image], who have been cutting their own path in the rock world, and now with two drummers they are sounding even mightier than ever.

There’s been a lot of hype surrounding Pale Waves lately, and they certainly drew a crowd, it’s probably personal taste, but I couldn’t see what all the fuss is about, although they were good to photograph. So while The Libertines were playing their headline set on the Main Stage, I joined a completely different set of fans for The Amazons’ headline set in the Calling Out tent, and they put on a fantastic show for those fans. And that was me done for the festival. I wanted to make an early escape in the morning before the hoards descended on the train station.

Weather aside, my impression of the festival on my first visit was a good one. Great setting that’s easy to get to without a car, and decent facilities. As was to be expected, the food was overpriced but not extortionate, with plenty of variety, and substantial, healthy, flavoursome bargains could be found that satisfied even my particular tastes. The music line up was as diverse as you could want, and I only saw a fraction of what was on offer. And if live music wasn’t your thing (why would you go to a festival if it wasn’t?) then there were plenty of DJs, cabaret acts and other weird and wonderful things to keep you amused. I prefer the intimacy of Leefest/Neverworld, but Kendal Calling never felt too big or overwhelming, like the major festivals such as Glasto.

Would I recommend it? Absolutely. Would I go again? Possibly.