Here at Raw Meat we like to celebrate an important records’ birthday by reviewing it as though we’ve never heard it before. 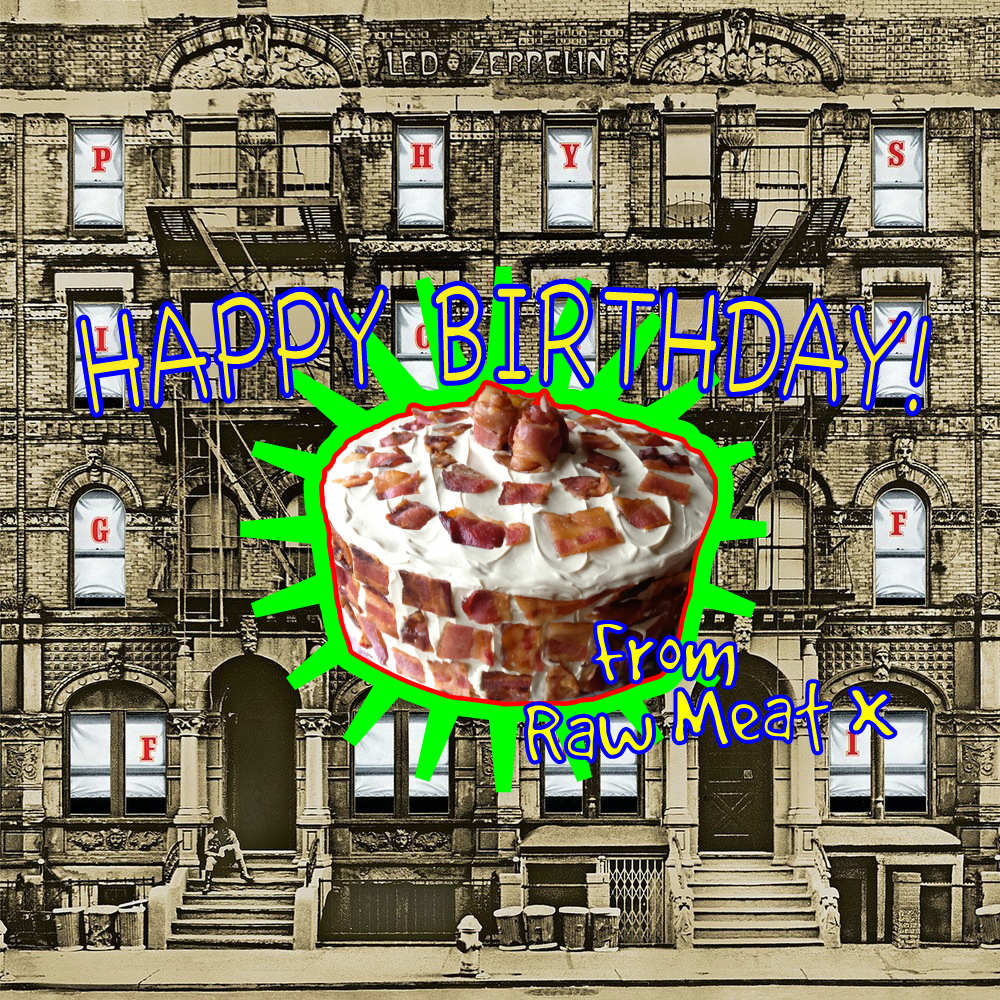 Here at Raw Meat we like to celebrate an important records’ birthday by reviewing it as though we’ve never heard it before.

A good double album is a difficult challenge for any artist. The Beatles and Pink Floyd did it, with George Harrison even successfully mastering the triple album. Led Zeppelin can be added to these esteemed alumni with their sixth record, Physical Graffiti, a sprawl of musical genres brought together brilliantly through immense musical abilities.

The album’s opening ‘Custard Pie’ is a real introduction, kicking off with raunchy innuendo. A simple catchy riff entwined with a weaving bass line is complimented with Robert Plant’s wailing vocals. This hard rock style is Led Zeppelin and is prominent throughout the first part of the album. The second track ‘The Rover’ follows with Jimmy Page’s raucous blues riff and one of his best solos topped off with some lyrical mystique; Plant’s repeated wish for us all to, “Just join hands”. The blues are present in the album’s longest song (just over 11 minutes), ‘In My Time of Dying’ where Page utilises an echo slide to slowly build the song in an attempt to create a sound reminiscent of the Delta blues style. The dancing swing and cowbell of ‘Houses of the Holy’ and the funky John Paul Jones keyboard driven ‘Trampled Under Foot’ builds to Led Zeppelin’s most ambitious track and the closer of the first album, ‘Kashmir’. A true epic of a song boasting orchestral trademarks and lyricism influenced by Plant and Page’s trips in the Middle East. All of this, placed against an unyielding drumbeat produces the best song of the record and ends the first album on a real peak.

The first of this double album may have revelled in its hard rock styling, but the second album is not confined with the same creative shackles. You soon become aware of this in the album’s opener ‘In the Light’. Starting with a solo organ which sounds like it’s taken straight from Scottish traditional folk, it erratically builds into a dark and brooding rock song and finalises the transformation into pop with its chorus refrain. The genre-swapping second album has allowed for some filler to sneak in, and it seems with some songs Led Zeppelin have just used any recording they had to hand at time of release. Even if it is filler, it’s testament to the greatness of the group that it’s very good filler with each song boasting their own merits. In ‘Bron-Yr-Aur’ Page’s instrumental extended guitar solo brings up imagery of rural farmlands, and both ‘Boogie With Stu’ and ‘Black Country Woman’ showcase a more relaxed side of the band. Although there is evidence of reverting back to their classic musical epics with ‘Ten Years Gone’, there are some serious attempts at moving away from this with their stylistic choices. They even venture towards country with ‘Down By The Seaside’, although this is soon given up about halfway through when the song transcends blues and then back again.

With the release of Physical Graffiti, Led Zeppelin have produced a masterclass on double albums and genre diversification that any band will struggle to beat. Although their lyricism may not match their competitors when it comes to cultural spokesman, as a group of musicians they are truly unbeatable.