May Bank Holiday was taken over by Live At Leeds. Each venue was full of music lovers and all bands had a more than appreciative crowd regardless of their genre. 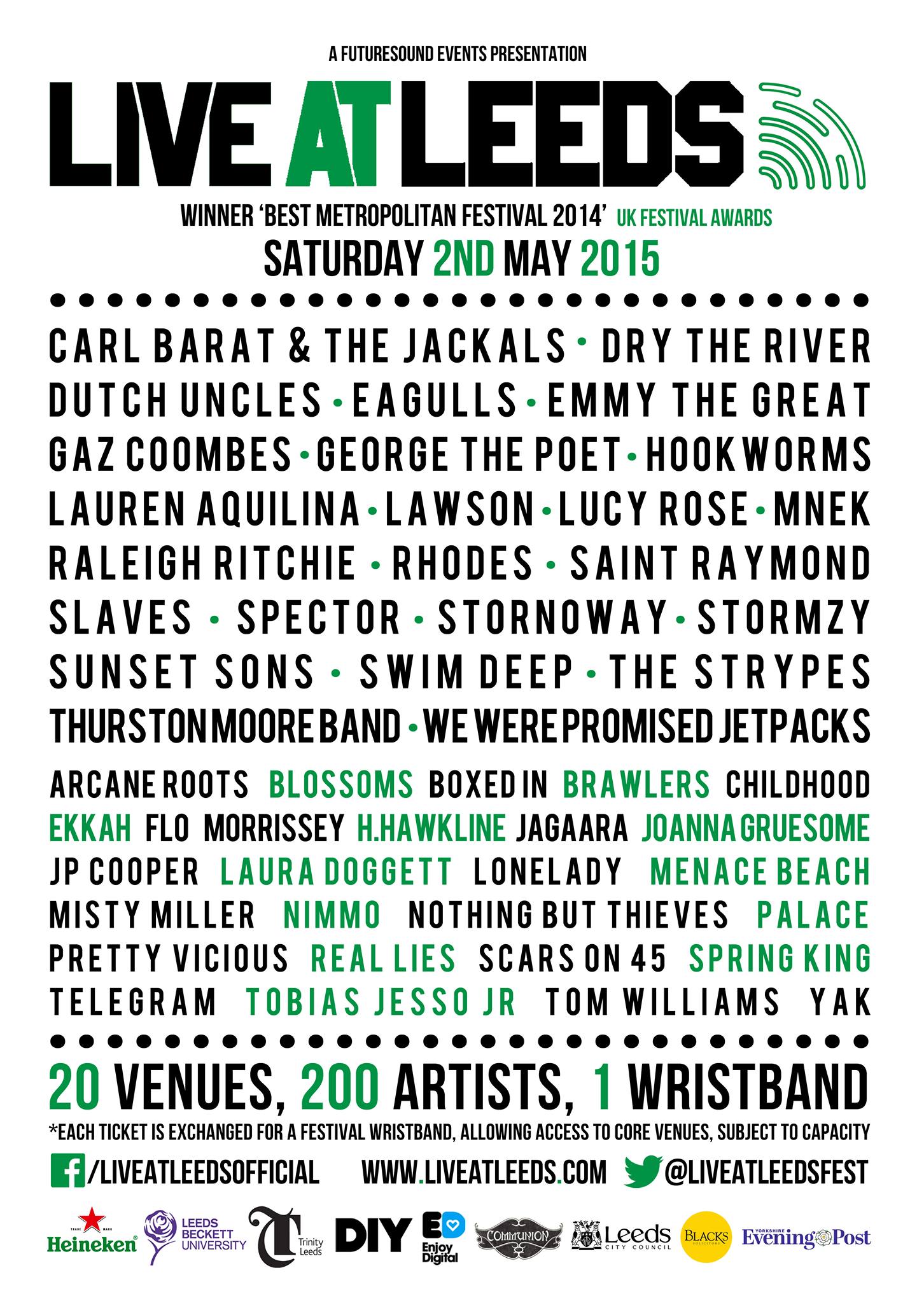 May Bank Holiday was taken over by Live At Leeds. Each venue was full of music lovers and all bands had a more than appreciative crowd regardless of their genre.

Despite the dismal weather and over-priced beers, Live At Leeds had a true focus on promoting amazing artists that would be overlooked by other festival promoters. Here’s our round up of the best acts we saw.

Since the rise of the infamous Bastille and electronic duo Disclosure, the music industry has opened its arms to more and more electro-pop indie bands. Clay are a shining example of bands that know how to bring together synths, guitars and drums to make such exotic sounds. The packed out venue at the Belgrave and the ecstasy drooling from the band made for a lively start for Live at Leeds.

Yak’s skate-surf rock embedded with blues vocals resonated through the speakers of the university union and awakened a ferocious and dynamic frontman. Final track from the Yak boys involved the addition of keys, introducing a bizarre space-ship sound to their music that still managed to suit their eccentricity. Mocking the Live at Leeds slogan, “200 artists, 20 venues, 1 wristband” and throwing themselves around the stage; Yak could easily be considered the UK version of Fidlar, with less reference to drugs.

One of the best things about festivals is reading the vast array of weird band names on the line up - Plastic Mermaids is up there with one of the weirdest band names appearing at Live At Leeds. The 5-piece from the Isle of Weight played arguably one of the most inventive and interesting sets of the whole festival. Bringing a collective of sincere folk vocals with bowed guitars and strange synths, Plastic Mermaids make quite the unforgettable experience. The twinkling lights in the background added to the mystical and peaceful aura surrounding the band and their set was one of our favourites of the festival.

Surf rockers, Spring King, roused the crowd at the Brudenell into a frenzy. As the band stepped on stage it was the drummer that took centre stage and addressed the audience as the frontman of the band. With the initial fear of his vocals wavering due to the relentless slamming of drums being removed, Spring King excelled. Their melodic surf rock was invigorating; the hooks were dripped in golden rays of sun and the drums were smothered in hard-hitting rock, causing a commotion even in the sparse crowd.

There’s something special about Slaves. They’ve got more pent up angst than a troll on Twitter, they’ve got a “don’t-give-a-shit” punk attitude which is handy - given their bitter taste and their live performances are ensured to cause utter carnage wherever they go. For a crowd that had been drinking since midday (and a crowd from Yorkshire) nonetheless, it was a recipe primed to perfection for the duo from Tunbridge Wells. Before Slaves began bustling into their abrasive punk rock, the chants of “YORKSHIRE. YORKSHIRE. YORKSHIRE” rang through the Brudenell.

Rifling through old tracks ‘White Knuckle Ride’ and most recent release ‘Cheer Up London’, their aggression is paramount throughout. The Dolly Parton introductions to each of their tracks and their bold, satire humour allows Slaves to smash down any boundaries that other subordinate rock duos conform to. Had the sound been better and not so many crowd surfers landed on their heads; who knows what pandemonium would have been caused.

Until next year, Live At Leeds.