when?
November 1, 2014
Where?
Nightmare Festival
Various

01.11.14, Nightmare Festival will be taking over Camden Town with its magnificent line-up of rock, metal and indie bands. 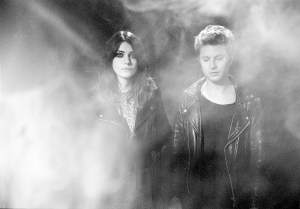 01.11.14, Nightmare Festival will be taking over Camden Town with its magnificent line-up of rock, metal and indie bands.

With over 100 fresh and upcoming bands playing the festival, we’ve pulled together a few of the bands you definitely need to check out at Nightmare this year.

Let's kick things off with indie alt rock band Blood Red Shoes, who are amongst the several bands headlining Nightmare Fest this year. Since 2004, Blood Red Shoes have built up their repertoire as an incredible live band - their raw talent and power shown on record is only enhanced in their live performances. Steven Ansell’s intense drumming and soft vocals combined with the sugary vocals and guitar from Laura-Mary Carter sets Blood Red Shoes apart from the rest, making them a band that will be remembered for decades. Their sublime riffs will be echoing in your ears for months after Nightmare.

One of our favourite grunge bands, Tigercub will be gracing Camden with their moody yet dulcet tones during the day. Tigercub are a band that aren’t phased about making music that will make them ‘fit’ into the sort of rock that’s popular nowadays; they’re music is straight up grunge with no added extras. In the past year, Tigercub have been creating some brand new tracks that consist of largely heavy grunge material that will coincide with the Halloween theme perfectly. Jamie Stephen Hall’s captivating vocals and the distorted fuzz from bassist James Wheelwright are enough to entice anyone into a dark and grim venue.

Rock n roll band, Dedwardians are ones to watch at Nightmare. Infused with influences from the likes of Elvis Presley and Sex Pistols, Dedwardians add something new and exciting to classic rock n roll. Dedwardians (briefly) told us how excited they are to play Nightmare Fest, "This is great for the London music scene and it’s sure to be a great day all round."
They also mentioned a few bands that they themselves are looking forward to seeing: Blood Red Shoes (obviously – they’re killer), Dead Sea Skulls (one of the five ‘death’ or ‘dead’ named bands) and Dumbjaw (gritty rock band with a punch).

Fresh from the release of their new single ‘Annie’, ours boys in Beasts will be slaying Nightmare Fest. If you’re after some heavy and fuzzy grunge (with some added spice) then Beasts are exactly what you’re looking for. Beasts are the most real and genuine rock band out there; they play honest rock music and the gutsy vocals from Joe Mallory-Skinner shows just how much this band put into their music.

Max Raptor are not one to miss at Nightmare. These guys are guaranteed to pull off a killer live show. The angst and punk edge that makes Max Raptor, well, Max Raptor is only highlighted on stage through singer, Wil Ray’s, energetic and generally quite chaotic live performances. After watching these guys pull off two tremendous sets at Y Not Festival, we’re totally excited to see these guys again: true punk rock guaranteed.

Rock band Hawk Eyes are amongst the more well-known bands playing Nightmare Fest this year. These guys have been tucked away for the past year recording their next album meaning their performance at Nightmare will more than likely consist of some of the more recognisable, cutting edge riffs of Hawk Eyes along with some new, bound to be mind-blowing, riffs and breakdowns. Their show is sure to consist of mosh pits, carnage and utter anarchy – in other words, the best kind of show.

The vast majority of acts playing Nightmare this year consist of heavy rock bands so when reading that chirpy surf-rock musician, King Charles, is playing it comes as a bit of a shock. But that doesn’t mean to say it’s a bad thing. After all, listening to heavy rock music for 4 hours can get a bit tedious and is probably very damaging to your ears… anyway. King Charles is one of the most fun artists you’ll ever listen to; he has a sweet, caressing voice and his lyrics are so beautiful and heart-wrenching, that you can feel yourself falling in love instantaneously. If you manage to break away from all the rock at Nightmare and see King Charles; be prepared to be serenaded.

We Are Carnivores aren’t necessarily something 100% new musically but they’ve got melodies and breakdowns that are so powerful they could knock you out in one. These guys are more often than not likened to Don Broco and even more so early Lower Than Atlantis – you know, before they got really, really shit. Despite these quick assumptions, We Are Carnivores do manage to bring something new to the table. You only have to take a quick look at their Facebook and their music videos to see how much these guys enjoy what they’re doing. They don’t take themselves too seriously and that’s what makes them so good. The rough English accent from Harry Christopher seeps through their formidable riffs; making their alt math rock vibes that little bit sexier.

The bands that we’ve mentioned are only a small fraction of what's on offer at Nightmare Festival - there are so many others worth seeing that we’d be here for days if we listed them all. Festivals like Nightmare are all about finding new bands that can restore your faith in the ever-failing music industry. So go see someone you’ve never heard of before, whether it’s because they’ve got a weird name, you’re waiting to see another act, or simply because you’re too drunk to walk to another venue (we anticipate this happening a lot with us at Raw Meat). More people need to start supporting smaller festivals like Nightmare Fest so that more and more talent can be found, nurtured and encouraged.