The enigma that is Nordic Giants, have released their astonishing debut album, A Séance of Dark Delusions. 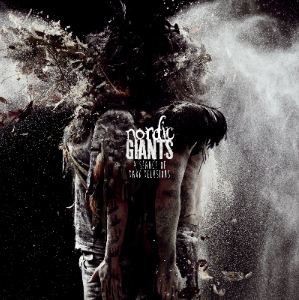 The enigma that is Nordic Giants, have released their astonishing debut album, A Séance of Dark Delusions.

‍Tackling an album like A Séance of Dark Delusions is as much of an honour for a music journalist, as it is impossible. As a duo, Nordic Giants are as elusive as they come: on social media sites their hometown is unknown, their full names are never used and on stage they can be seen covered in feathers and fog, making their appearance unrecognisable. The ambiguous nature of the duo partnered up with their interesting musical techniques makes for something truly breath-taking. In A Séance of Dark Delusions, Nordic Giants have taken an array of instruments ranging from keys and synths to bowed guitars and trumpets, to make an extraordinary sounding record which is incomparable to anything that’s been released in recent years.

Epic opener, ‘Elysian Skies’ instantly forebodes the dismal themes of the album with building synths and experimental noise flooding the track. This fluidity and the feeling that you should be watching a thriller transitions into ‘Evolve or Perish’. Taking samples from the recently deceased, Michael Ruppert, ‘Evolve of Perish’ becomes a chilling séance in itself. Placing the quote, “The planet is being destroyed all around us, using money try to address that problem, and shooting yourself in the foot” over eloquent keys, and floundering guitars and drums, expresses the ruthlessness of Nordic Giants and the messages they’re trying to convey.

Nordic Giants understand and feel their music. The instruments are given a breath of life, piling the emotion on to the record. Beth Cannon’s exquisite vocals makes their sound even more personal as they swoon over the sombre, but empowering piano. Frejya’s angelic voice in ‘Give Flight to the Imagination’ as she sings, “This is utopia, this is the promised land” gives a feeling of hope and wonder amidst the overwhelming sound of darkness and defeat from the otherwise weeping keys and synths.

The poignancy of Nordic Giants builds into ferocious progressive rock in ‘Futures Dark’. Starting with a smashing of drums and guitars - the song changes the album's direction, becoming more forceful in invoking a response. Nadine Wild Palmer brings in a soulful sound, contrasting with the electric guitar and clattering drums, showing that Nordic Giants are more than capable of changing where required.

As beautiful and thought-provoking as this album is, it is not one for the faint-hearted. At times, it can be a draining listen, but there is so much more magnificence to this album than dread. Nordic Giants have created an incomprehensible record full of heart-aches and lessons for us all. At a time when the general election has left half the British population crushed, and the world is becoming increasingly unstable, you can’t help but think Nordic Giants have released their album right on time.