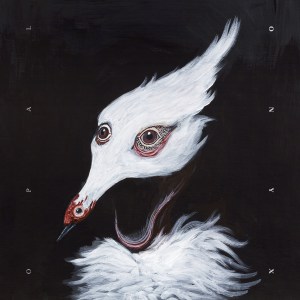 There’s something sinister about Opal Onyx, in a pleasantly genuine way. From the opening track ‘Black & Crimson’, Delta Sands draws looped instruments and electronics together with haunting vocals and sweeping noise, to great effect. It’s an album that immediately begs for headphones (or a stereo with surround sound) as hissings, hummings and featured electronic interference sweep to and fro.

The stark contrast between the opener and second track, ‘Personal’ must be intentional, because it’s here that the album is at it’s most traditionally musical; it’s guitar lead, with delicate vocals from Sarah Nowicki and lingering cello parts from Mathew Robinson rolling underneath. Drums and percussion are used as accents rather than any kind of feature unto themselves, and the warmth of the cello brings a human quality to the often electronic-focussed and experimental-heavy record.

There’s an obvious use of loops throughout - the tracks are constructed in layers, often with the vocals drifting off as they decay, swathed in effects. Nowicki’s voice has hints of PJ Harvey, and not just because of the reverb and slow, soft delay. Songs like ‘Evaun’ and ‘Fruit Of Her Loins’ are perfect examples of her PJ Harvey-meets-Grace Slick (dare we even say, Kate Bush?) tones. ‘Evaun’ also descends into a complete noise-fest of helicopter sounds and sine wave swirls, before the more Wicker Man sounding, ‘Iron Age’.

It’s an album that will really made you sit forward and listen; picking apart the paper thin layers of organs, sitar-sounding lap steel, off-beat EDM hints and unashamed synths that, at times, build to air raid siren proportions. Their music almost has a cult-like quality - ‘Desperate’ for example - these aren’t the hymns of a religion, but something much darker. It’s something in the rhythms, the repetition, and the ominous relentlessness.

Their take on cowboy blues comes in the shape of later track, ‘The Devil’, and although it has the components of a dusty American roots standard, in their hands it is far from it. In the same vein, ‘Arrows Wing’ and ‘Bright Red Canyons’ could be their take on traditional folk, with chord progressions, straightforward lyrics and touches of piano. Strangely, title track ‘Delta Sands’ feels slightly at odds with the rest of the album, as though it were written at a very different time. The melody flows over the MPC drums in a way that we haven’t heard on the record before and compared to the rest of the tracks, it practically feels like pop. Not that there's anything wrong with that.

These aren’t songs that you’ll hum as they stick in your head, but the breathless beauty of ‘Fruit Of Her Loins’ and ‘Bright Red Canyons’ is something that will stay with you in a different way.