This Brazilian hip hop/ baile funk trio have released their second mixtape Nossa Gang (Our Gang) and it's filthy good. We spoke about where they come from and where they're going. 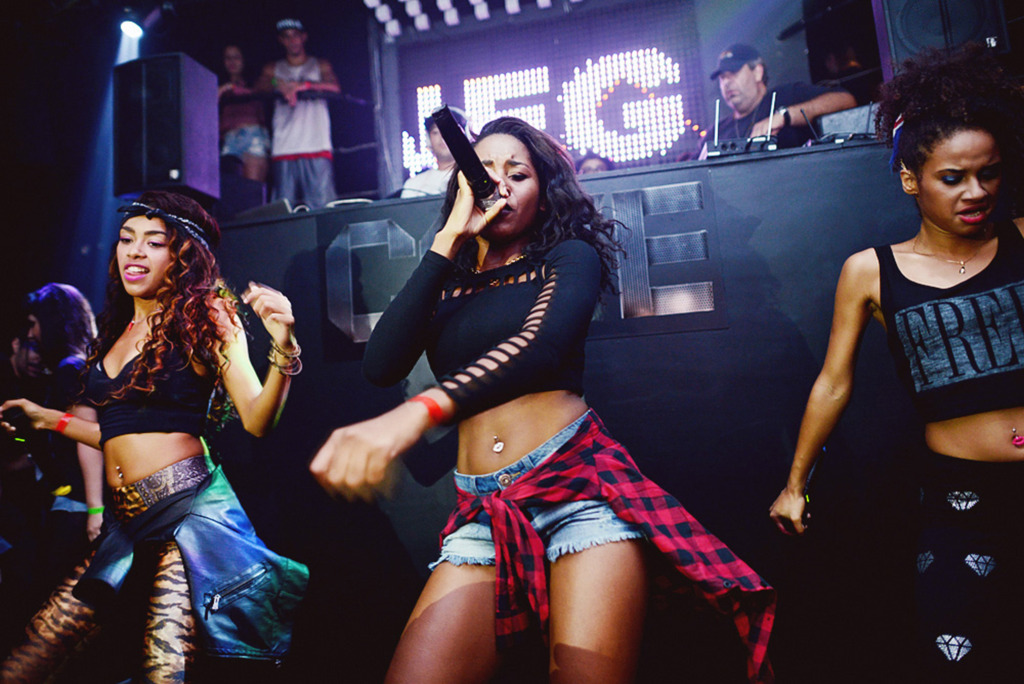 This Brazilian hip hop/ baile funk trio have released their second mixtape Nossa Gang (Our Gang) and it's filthy good. We spoke about where they come from and where they're going.

Let's start with ‘Guerreria’, meaning female warrior. Just like every other Pearls Negras track, 'Guerreria' is loud and fierce, while removing any concerns that you might not understand what they're saying. Based in the Vidigal Favela in Rio De Janiero, Pearls Negras' music has charmed audiences across the globe. Their Biggie Apple mixtape started making waves when it was released at the beginning of this year.

The weight of their basslines would be distracting if it wasn't for their incredible, angel-faced flow.

We were lucky enough to ask the band some questions (with the aid of a translator)...

Raw Meat: How did Pearls Negras come about? How did the group begin?
Pearls Negras: [Mariana] It all started five years ago. Alice and me knew each other already from Nós do Morro which is a community based theatre company and school in Vidigal. We started taking rhyming classes with Jeckie Brown and slowly we got into the rap and hip hop world. Jennifer joined us later on and we started playing some gigs in small places and at events. When we played at Morro do Alemao (another Favela) Jan (one of Bolabo Record's producers) came to talk to us after the show, and we were like, "What is this crazy guy talking about?" We didn't have a clue of what he was saying! Then he came back with a translator and asked to record some songs with us. We were a bit scared in the beginning but it was all great. Jan was staying in a apartment in Vidigal where he set up a home studio. The communication wasn't that difficult every beat he showed us was really rad, so we came out with a lot of songs - the ones that are on our first mixtape! After a year or so he came back with his studio partner David and we recorded 'Pensando Em Você', which is our best hit. Since then we have being partners and we love to create music with them.

Do you write as a group?
[Mariana] Sometimes we write in group but also individually. The inspiration can come from everywhere and in unexpected ways. We can start from a phrase, a simple word, a rhythm or a melody and from that we develop a song.
[Alice] We can sing about everything that comes into our minds, can be a protest song, but also about a night out and having fun. We generally talk about our own realities and things that belong to our world.

There’s an amazing energy and intelligence in the music. How important are political issues to you?
[Alice] Have you ever listened to our song 'Mr. President'?
[Mariana] It's really important for us to talk about things that are happening in society which are issues that not only concern us but everybody. A lot of people go on the streets to protest and set fire and break things, we are protesting in a different way, through our music and lyrics, we can represent not only our voices but everyone else's that are out there and is not happy with this situation.

How do people tend to react to your music? Are you ever surprised by their response? Do you think that the fact that you’re a strong, all-female trio ever effects this?
[Mariana] As soon as we get on stage people start shouting! Even just from hearing our voices in the announcement they start to vibe, it's because we are bringing something new here, we are innovating. Yes, we are girls and we sing and rap, but we are also teenagers and in our lyrics we talk about everything and this is super important to us. The public in the beginning was like, "Who are those kids?" but then in the end we always manage to surprise them, cause we are young, we are beautiful and we like dressing cool and wearing lipstick, but it’s not because we are teenager girls it means that we are silly. We came with depth as we talk about reality. So the reaction is really positive. We can see everybody is dancing and having fun during our shows and they always get what we are about.

What is the music scene like where you’re from?
[Alice] In Rio de Janeiro Baile Funk is the thing.
[Mariana] It’s a really cool and energetic music, we like it.

What other bands or artists are you into right now?
[Alice] Drake.
[Mariana] Beyonce.
[Jennifer] Chris Brown.

How do you feel about the London tour?
[Jennifer] We love the swimming pool in London Fields!
[Alice] The last show we did here in London was amazing! There was a great vibe and it was very similar to a place we love to go in Rio de Janeiro to dance hip hop, called Febarj.
[Mariana] Yeah, and they played loads of tunes that we love so we danced all night!

As if you weren't convinced by now, Pearls Negras have released a new mixtape, Nossa Gang and it's even more raging than the last. We've had it on repeat all weekend. Check out 'Make It Last' and the incredible verses in '174'.