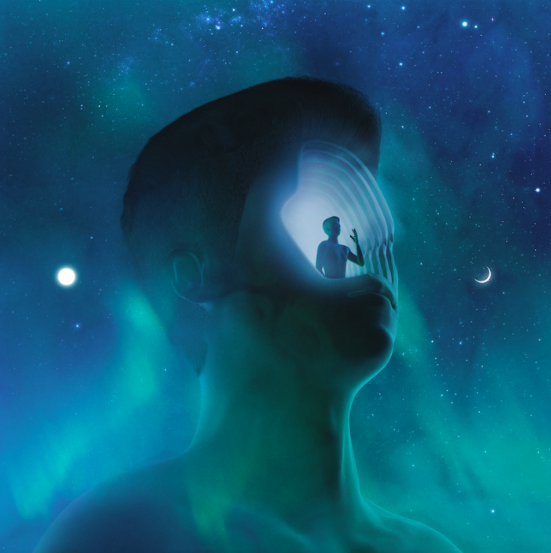 It is no exaggeration to say that, back in 2014, DJ and music producer Petit Biscuit achieved the mysterious, enigmatic feat of “bursting onto the scene”. In the form of just his third single and attempt at making waves, the French-born Mehdi Benjelloun saw the intricate beats of ‘Sunset Lover’ soar to millions of adoring listens on Soundcloud. Somewhat playing the role of an enigma himself, the years that followed saw only hints of what was to come. With the arrival of the full-length Presence, Benjelloun has finally revealed his cards.

Acting as puppeteer to the mystery he evidently enjoys toying with, proceedings begin with the initial far-away buzz and impending rumble of ‘Creation Comes Alive’. There is an ominousness nod to things to come. With the song building as gradually as it does, added to the current trend of chasing the biggest “drop” on the scene, it’s a welcome surprise that when matters do get going, everything is under control and just as it should be. It shows a restraint, refinement and maturity that is sorely under-valued by radio playlisters and streaming algorithms.

The ferocity jumps up a notch on ‘Break Up’, and comes as a surprise. Starting with a humble acoustic guitar being plucked with purpose, the piece builds and eventually breaks to nothing more than a wailing, indecipherable vocal backed by the thudding beat of a drum. It exposes an unexpected wildness to the producer’s work. The climax, comprised of wails, drums, thuds and even flutes, is haunting in tone, suggesting a darkness lies beneath.

We see this darkness fully exposed in the title track. A delighted acoustic guitar is soon joined by a set of sweeping strings in an arrangement that is fit for the closing scene of a triumphant multi-million Hollywood flick. Alas, an underlying reverberation indicates the listener is to take the song at face value at their own peril. The glorious strings fall away and are replaced with a snorting bass line and snare drums appreciative of the days when UK garage was flying high and underground raves were actually a thing. To create a sound so attention-grabbing with so few components is not to be sniffed at.

This makes it all the more curious that such highs can feature on the same album with such lows. ‘Problems’ talks of California and “texting her at 3am”, and is accompanied by just the kind of sickly-sweet music you would expect. The unperturbed vocals of Lido takes the listener dangerously close to The Chainsmokers (don’t look them up). ‘Forever Being’ is no different to the reams of cookie-cutter “producers” haunting radio stations, in its exploring unchartered territory of getting drunk. ‘Gravitation’ takes a leaf out of Owl City’s book (remember him?), which isn’t a good thing. The beginning tones are inoffensive and nauseating to the point of irritation. Isaac Delusion – who lends his vocals – is so nasal and perfect the song is robbed of any kind of emotion. The muffled, overlaid astronaut explaining that the ascent into orbit has been successful is so cliched and obvious it is hard to fathom.

This is frustrating beyond belief as, on several occasions, Petit Biscuit and Presence does surprise and delight. The main component of ‘Follow Me’ is a well-crafted combination of synths, beats and vocal chops expected of an electronic album. The song – and, in doing so, Benjelloun’s apparent ability – is taken to a different place with the unexpected turn of everything falling away to leave only an off-key string section. Soon after, the listener is treated to a range of beats and synths entirely different to those that preceded them. It is a move so unexpected it confirms that yes, Petit Biscuit is an artist, sculptor and visionary. The intricacies of ‘Sunset Lover’, meanwhile, are so delicate and well formed, they provoke not one emotion but several complex layers.

‘Sunset Lover’ is adored by many fans across the world, and rightly so. The song’s lowkey beginning plucks of a guitar are sure to evoke disproportionally frenzied emotions amongst crowds in his upcoming live dates. In a strange way, though, this deserved adoration may represent somewhat of a stumbling block for Presence. The variety seen on the album is indicative of a wildly talented musician and artist, even more so when it is considered Benjelloun turned only 18 years old upon the record’s release. It is also, though, an accurate representation of the disparateness of the quality, themes and tones seen on the album. I go mad for some of the tracks, for example, and am utterly nonplussed about others, and I suspect I won’t be alone in this sentiment. There are some genuine moments of euphoria, yet there are some that are clearly forced. There is a handful of diamonds in the rough on Presence; though I’m not sure Petit Biscuit has quite yet mastered how to make his talents fully shine, I look forward to witnessing how he goes about doing so in the many years he clearly has ahead of him.