Our snapper Chris Patmore spoke with Pierre in London, about his music, the upcoming festival, and living in Montreal. 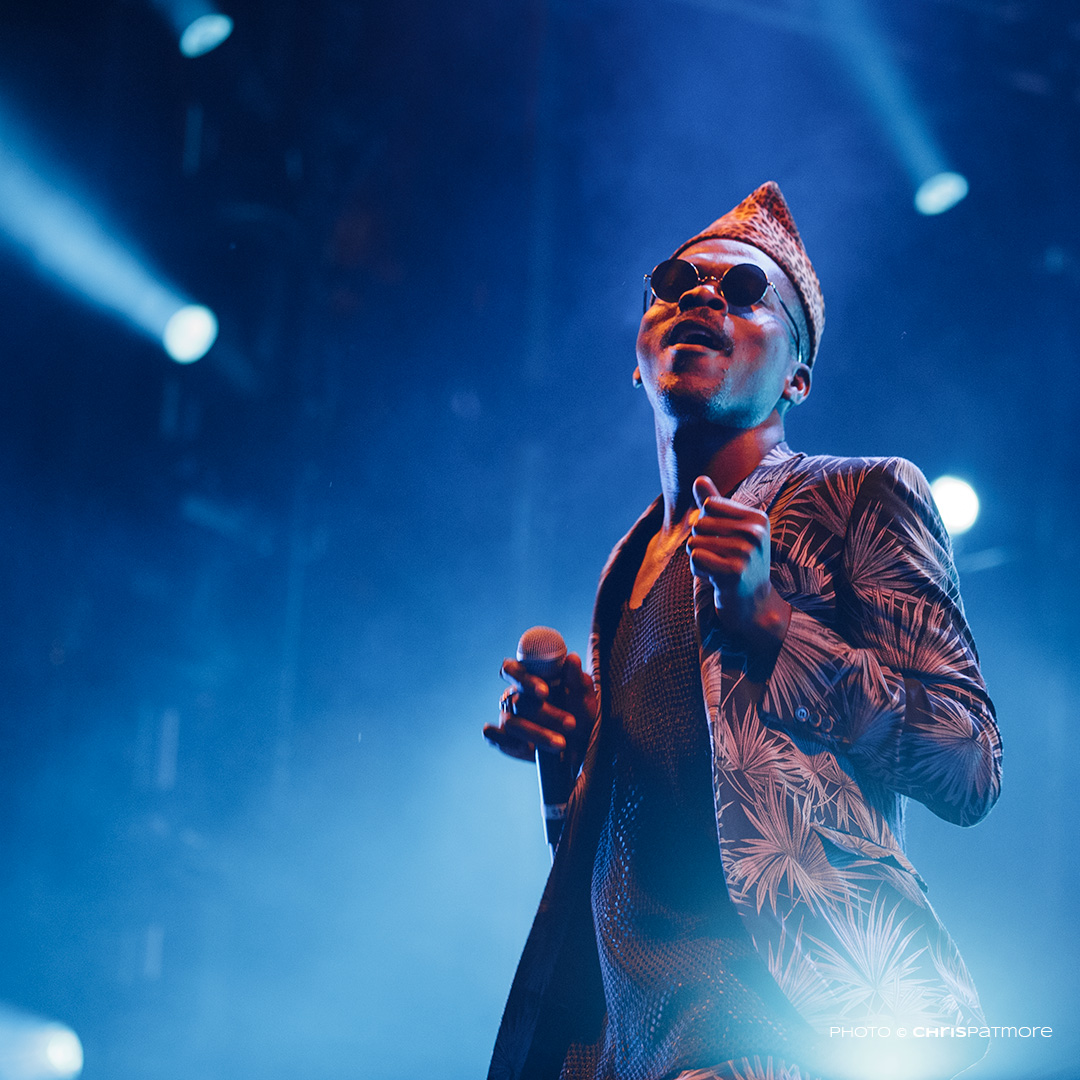 Our snapper Chris Patmore spoke with Pierre in London, about his music, the upcoming festival, and living in Montreal.

Pierre Kwenders is a Congolese-born musician based in Montreal. He was recently playing gigs around the UK and Europe to help promote POP Montreal Festival, which happens in venues around Montreal 13-17 September, featuring 400 bands, along with 200 artists covering traditional media as well as film and fashion.

RAW MEAT: How would you describe your music?
PK: Recently I was with my friend Baloji, who is also Congolese and lives in Belgium, and we kind of do, not exactly the same thing, but we both mix Congolese rumba with a lot of different genres, electronica and stuff. The most proper way to identify the music would be Indie Afro, maybe.

Do you think it is important for musical genres to crossover?
Definitely. That is what music is all about. Music has no boundaries or countries, whatever it is. We all do pretty much the same thing but in different ways, depending on what our background is. For me, for example, I grew up in Congo until I was 16, then moved to Canada, so I have both backgrounds that have influenced me. I try to use both the Canadian and North American influences I have, and my African influences, then blend them and express it in my music.

How did you find the change in moving to Canada, apart from the winters?
The winters are definitely the worst thing about Canada, especially in Montreal. You never get used it. Every year is a new struggle.

But the summer is fantastic…
Summer is fantastic, there is no doubt about that. I spend all of my summer in Montreal and don’t want to leave because there is so much happening. We have the best weather, and the city is so culturally diverse that it’s easy to blend in and be yourself. You don’t have to try to be like everybody else.

And you have the advantage that they speak French.
Exactly. Both French and English.

You’re in the UK to promote POP Montreal, one of the many festivals that happen in the city.
POP Montreal is a festival that happens in September every year, for the last 16 years. This is the second time they’ve done this POP Off tour, where they choose some artists and take them to Europe. Calia (Mozart’s Sister) and I have been taken on a wonderful ride. We’ve played Focus Wales, The Great Escape in Brighton, London, then on to Glasgow, Liverpool, Paris, Berlin and Krakow. I’m really excited about it, and it’s fun. I’ve never played in the UK, so this is a new experience for me. I’ve played in France and Italy, but not the UK, so it’s new territory for me, and I’m intrigued to see how people will react to the gig.

It should go over pretty well. You must have walked around here and seen how diverse it is.
Exactly. I’m happy. I have a new album coming in September, so this is a way for me to promote the new album, to find agents or collaborators to help push the new album once it is out.

The Great Escape must be quite similar to POP Montreal, in that it’s lots of bands in lots of small venues.
Yeah, it’s quite the same but the experience of The Great Escape was something else. I’ve never experienced something like that. I had this opportunity to make so many contacts. I met so many people that I didn’t really have time to see shows because they are only 30 minutes. By the time you get from one to the next, they are half way through their set. There were a couple that wanted to see, and did. It’s a great experience and I stayed all weekend. The first day was raining all day, which was the day we played. The showcase was fun and went really well. The next couple of days were amazing weather, and I got to walk on the beach a bit.

It’s really more of a seafront than a beach. There’s not a lot of sand.
It was just great to be by the sea and get some fresh air. It was like having a day’s vacation.

Who did see that impressed you?
This guy from London, who was born in Kinshasa, called Miles From Kinshasa, who plays RnB electronic music. The other guy I saw very late Saturday night was Salute from Austria who does RnB/electronica. He’s more of a producer/DJ and I believe he doesn’t sing. He was really interesting.

Do you usually work with a band?
I have a three-piece band; a guitar player, an electronic drum player, and the other guy does keys and a bit of guitar and takes care of the computer for the stuff that comes out of that. Only one of them is with me here, so he’s the lucky guy that has do almost everything. It’s a stripped down version of the show. If people like us, and want us back, next time I’ll bring the full band so we can give it everything we’ve got.

It’s pretty tough getting gigs in London, or paid ones at least.
It’s pretty tough everywhere. When you have a stripped-down version you can travel easily and play almost anywhere. But that’s how the music business is now. You have to live with the times and do whatever it takes to perform.

Do you do your own recording and production work?
I do not produce. I write all my lyrics and melodies. I like to collaborate with a lot of producers. I just worked with two producers from here that I have been following online. Not for my upcoming album, but I keep recording because you can’t stop working. You have to keep making music to grow and discover new avenues. That’s what I like to do. If I’m in a city and I know some producers, I’ll try to go and meet them, just to keep creating. Also, when you are outside of your own town, the inspiration is different. I feel something else here, it’s just different vibes, and it takes you somewhere you thought you would never go.

Are you good at absorbing what you see and feel around you?
Oh yeah. I’m very good at that. When I’m in a city, I want to get into the city, get to know people and see how they think or work and find a connection there. Working with musicians in different cities, it’s always fun to start from scratch, to see what comes in my mind. So far it’s been magical.

What bands did you listen to when you were growing up?
Growing up, the most influence I had was from Congolese rumba, but I also listened to Michael Jackson, like pretty much everyone else. I remember listening to him and I just loved the music, and I couldn’t even understand what he was saying. I was just singing and dancing along to Michael Jackson. That’s something I admire about music, because growing up listening to Michael Jackson and not knowing a word of English, but still having the music anyway. It has given me confidence in what I do, because I sing in five different languages and different rhythms. My mission is to make people feel the music, rather than to try and understand what I am talking about. Although I’m not talking bullshit in my songs, I’m mostly talking about love and everything else that is happening in the world. I always have the translation of my lyrics available, but it’s fine just to be able to make music and follow in the footsteps of the people that influenced me, like Congolese musicians such as Papa Wemba, who passed away last year, and Koffi Olomide or Rochereau Tabu Ley. Who else can I say? There’s so many of them. I listened to a lot of classical music. I used to sing in a choir, that’s why I’m a big fan of classical music. I’m into a lot of things.

The way I see it, African music is very much for the body, while Western classical music is much more for the mind and intellect.
Yes, it is intellectual but you can also get intellectual African music, but it will still have that groove. While you’re dancing, you can still think.

But the rhythm has to be there.
The rhythm must be there. It must always be there.

You’re not going to be dancing to Beethoven.
Absolutely not.

Where else would you like to take your music?
I’d like to go back to Africa. I’ve never been back since I left. That’s my biggest dream right now. To take my music back to Africa and be able to perform there, in my home town, and all over Africa. Asia. I would love to go to Asia and see what is going on there. I just to be able to travel as much as possible, and get inspired as much as possible. Travelling will take my music else where and inspire me so I want have this tendency to repeat myself and keep doing the sam kind of music. There’s nothing wrong in that, but I just want the challenge to do new things every time.

Images and words by Chris Patmore.