During Raw Meat’s recent antics at Southsea Festival, we stumbled upon the tropical three-piece, Popobawa. 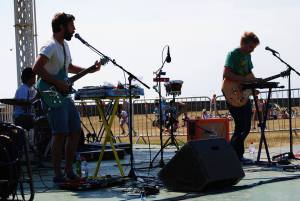 During Raw Meat’s recent antics at Southsea Festival, we stumbled upon the tropical three-piece, Popobawa.

These guys have the most peaceful and soothing sounds that when listening make you completely oblivious to everything going on around you. Check them out before they go viral. Popobawa consist of Ollie Hawkins (vocals, guitars, sampler), Sam McNeily (guitars, vocals, percussion, keys) and Steve Walker (drums, vocals). Admittedly, that sounds like they’ve got a lot going on but they still manage to sound so simplistic and so good. Answers are from Sam.

Raw Meat: Tell us about your local music scene; what’s your favourite local venue, are there any record labels or stores that we should look up, what’s the scene like where you’re from?
Popobawa: Everyone in Portsmouth and Gosport seem to have their own sound and there isn’t anything dominating the music scene. The Wedgewood Rooms is fun to play but there are lots of venues down Albert Road that are consistently putting on good nights. As for labels and stores, Pie and Vinyl is really worth checking out. It’s run by a bunch of lovely people and is a nice place to visit… but they do owe us a pie each.

Name one track or band that you love from the past.
Ollie has this great Wurlitzer jukebox full of 7-inches from the fifties and sixties that we listen to, so from that I’ll go with ‘Tears of a Clown’ by Smokey Robinson and The Miracles. Oh, and we love Creedence.

Name one track or band that you think we should be listening out for in the future.
‘Bamboo’ by Deers is nice.

What are you up to now?
Currently, we’re putting the final touches on a four-track EP; the mixing is almost done so we just need to get it mastered. We should be firing it into the ether within a month.

What can we expect from you next?
We don’t know what to expect from ourselves really. We’re hoping to play gigs in far-flung and exotic lands, like Southampton.