New record, Weirdon, from Purling Hiss is a two headed beast that will have each head gnawing at your ankles for attention. 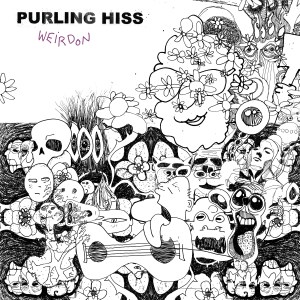 New record, Weirdon, from Purling Hiss is a two headed beast that will have each head gnawing at your ankles for attention.

From heavy punk rock through to sweet, soft, psychedelic lo-fi, there are moments of grandeur and moments of stagnancy, but with that said this is an album definitely worth a listen.

Weirdon is a musical yo-yo; it swings high and hard. Opening with power ballad-esque guitar work, before winding into Mike Polizze's trademark punk enthused, monotone vocals, it sounds vaguely surf as he chimes “I turn down the radio”. ‘Forcefield of Solitude’ is a cracking start and the energy continues into second track ‘Sundance Saloon Boogie’, but sadly only the energy continues. The vocals sound dreary and predictable and the repetitive nature of the song screams "single" and not in a good way. Third track 'Learning Slowly' is on a par with the opener, correcting the errors of “Sundance Saloon Boogie”. Mike's vocals feel melodic in their monotone and they sit perfectly in the mix before it hounds you with a pounding guitar solo and fuller instrumentation.

It’s here when the yo-yo that is Weirdon swings down and the second side of Purling Hiss rears its face, the soft Jekyll to the brash Hyde of previous tracks. We enter the meat of the album with ‘Another Silver Moon’. It’s psychedelia doused in pop, tinted with lo-fi production. After the first tracks, it is beautiful and refreshing. With deliciously dark verses shrouded in acoustic janglings, coated in the ever present droning vocals, before sliding into a chorus that can only be described as Oasis’ androgynous sibling that’s definitely not Blur. This highlight track culminates with a repetitive guitar riff almost echoing the drone of the vocals, it's euphoric and a strange, welcome, side of Purling Hiss that really shines.

This sound continues with other tracks 'Reptil-a-genda', 'I Don’t Wanna Be A...' and 'Running Through My Dreams'. 'Reptil-A-genda' moves in an acoustic, Kinks haze. It's bluesy and the guitar work is brilliant, filled with uncomfortable bends. Thematic to the song and possibly the best solo on the record, it’s awkward, off kilter and brilliant. The first tracks on this record can easily be forgotten as this sloth rumbles on. Throughout these tracks Purling Hiss have cracked this poppier, psychedelic sound, and they're the tracks to fall in love with on this album. 'Aging Faces', 'Airwaves' and 'Where’s Sweetboy' all fall under the punkier, heavier side of Purling Hiss and sadly don’t stand up. They seem haphazard and lacking the emotional thrust created earlier, a cop-out when placed next to them.

The album closes as it began, with huge guitar and that trademark drone, bolstered by an infectious chorus. 'Six Ways to Sunday' clocks in at nearly 8 minutes and it flies by, a Glasvegas that couldn’t be bothered to try. It’s a perfect laziness in sound and closes this mish mash of an album as a hangover closes a night of drinking. Weirdon is a hard album to give a score, maybe I would have appreciated the punkier side of Purling Hiss had I not loved the softer, sleeker psych enthused tracks so much. Pick this album up, somewhere on here will be something to fall in love with. Sadly, you probably won't love it as a whole.