Emily Pilbeam sat down with Jack Bennett, otherwise known as Grumble Bee, after his grizzly set at our all-dayer in Leeds last month. 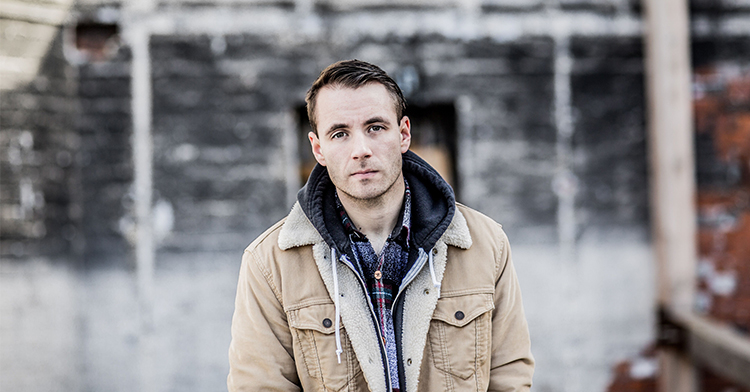 Emily Pilbeam sat down with Jack Bennett, otherwise known as Grumble Bee, after his grizzly set at our all-dayer in Leeds last month.

The Raw Meat all-dayer at the end of March was a huge success, even if we do say so ourselves. It was one heck of a busy day full of interviews, booze and, most importantly, bands; Grumble Bee being one of them.

Grumble Bee is the solo project of Jack Bennett; a dark alternative rock act that interlaces catchy hooks with pop-rock melodies and a bleak tone. Handling the tricky job of being one of the earlier acts on at an indoor festival, Jack Bennett and co. filled the room and riled up the crowd for a day of great rock music. We had the chance to sit down with main-man, Jack after his set and delve into the life of Grumble Bee.

RAW MEAT: You were on early but it seemed to go well.
Jack Bennett (Grumble Bee): It was alright, we enjoyed playing so…
There was a lot of people in there…
Yeah, I was surprised because we just got offered a tour with Deerhunter, so for the past few weeks we’ve been doing that. We got offered this show pretty late on so we weren’t sure whether people were gonna show up or not, or what it was gonna be like. But it went well.

Haven’t you been getting a lot of support from Radio 1 recently?
Yeah! Also Kerrang, too. Kerrang, I think, have been the best in terms of support because people actually engage with it - some people have come down to shows because of their coverage! You don’t think it reaches as many people as it actually does, a few people that have come down today have come down just because they’ve listened to that. That means they’re paying like £15 or £10 or whatever and they’ve just come to watch our set which is like 26 minutes or something – it’s crazy at the minute. I don’t think I’d be able to do that.

Did you say you’re based in Leeds and Manchester?
I’m from a tiny village which is thirty minutes from Manchester on the train and forty minutes from here.
So do you play Manchester and Leeds a lot then?
This is the first time we’ve played Leeds in a little while. We played Manchester on that Deerhunter tour a few weeks ago. That’s closer to home. I don’t know how much you know but this thing, Grumble Bee, is my project. It’s just me. But the drummer and I used to be in a band together called Paper Plane and we used to do a lot of stuff together in Leeds. Stuff like Academy One, some gigs and different stuff. So we have a fairly decent fanbase in Leeds, but we got offered the show like last week or the week before, and were offered the three o'clock slot, so I wasn’t sure how the turnout would be. But, I was like, “Gigs a gig” so I’m happy to play.

What’s your views on the music scene in Leeds then?
I love Leeds. I love Leeds. I love the place and I love Manchester as well. The crowd tonight was pretty funny though, because I love talking and heckling and stuff like that. It’s normally in crowds like London where you speak and it’s like, “Ah, I’m industry blah blah”, and I’m like, “Nah, do one”. There were like 500 people for Deerhunter in London and we played there and it was the first response where we’ve had people smiling and laughing and joking. It was crazy.

Is there anyone you’re going to catch today?
Yeah, I’m fairly good friends with Treason Kings so I’m gonna catch them. It’s good that London is finally taking them on, they’ve been going for donkey’s and I know that they’ve got on with X Ray Touring, so I’m happy that people are involved and stuff now. There’s quite a few bands I want to check out really. I know the guys in Get Inuit. We played with Dinosaur Pile Up a couple of times. I know their label, So Recordings, they’re great. I was in the studio so my head’s all over the place, so I’m not really sure what’s going on.

What are you doing in the studio?
I’ve got my first EP out, and I was working on my second EP in the studio yesterday. I’ve got blisters on my hands from drumming. I was looking for some tape this morning but obviously nowhere is open because it’s Easter. So I’m recording a second EP, which is hopefully gonna be out at the end of the year. I keep getting pressured, people are saying, “We need radio, we need to get momentum.” and I’m just like, “I don’t care”. I write the catchiest songs I can write, and if people don’t relate then I’ll just write more.

So what are your plans for the Summer, have you got festivals planned?
I do! But I don’t know if I’m allowed to say some of them because I’ve now got a booking agent and it’s the first time in my life I’ve had a booking agent and we’re actually getting paid for shows and not losing a lot of money for every gig. This one was great because it’s only forty minutes away. The ones that I can announce are Slam Dunk. We’re doing just acoustic though. They have a new stage this year and they’re putting on just acoustic acts, so that’s going to be Leeds and Birmingham. It’s funny because I’ve played this at three o’clock, and the next Leeds gig is Slam Dunk. But festival-wise, there’s Camden Rocks… what else is there… there’s loads but I don’t know what I’m allowed to say and what I’m not allowed to say. I’m playing 2000 Trees, should be playing Hevy Fest as well. My mind’s gone blank because I’ve literally been touring for two weeks so I haven’t been thinking about anything else apart from writing new stuff. I do everything myself as well, so literally as I’m talking to you, I’ve got people buzzing on my phone, saying like, “I couldn’t get in” or, “I need a photo pass” or something.

What band do you love from the past?
Brand New.

And hate?
Ooh, I’m gonna say Muse. I’m sure they’re awesome but I just don’t get it. I do not get it. It’s the voice for me. Voice and tone is what I love in stuff and I just can’t get on board with his stuff. It’s the same sort of thing with Deftones, like I love Deftones but I don’t get their songs and I can never relate to them. It’s the same with City & Colour. I love City & Colour and I can relate massively to their songs, but I can’t get into any of Deftones' songs. It’s weird. I don’t know what’s going on. So yeah, hate Muse – well I don’t hate Muse, I strongly dislike Muse because of his vocals and I think they’re a great band. But it doesn’t matter if I say that does it, they don’t care do they? People say that I sound like Muse and stuff like that. I get all sorts of things like that.

So what band or artist do you cite for the future?
So there’s a band down in Brighton called In Dynamics who I love. They’re really cool. I love Arcane Roots. I love… who do I love? There’s quite a few that are on the circuit at the minute. From listening to Alex Baker’s Fresh Blood stuff on Kerrang Radio, that’s just opened my mind to a lot of good stuff because I’m really cynical about the music industry and bands being any good.

I totally get that – I get sent stuff all the time and some of it is so bad. It’s really hard to remain optimistic when some if it is so awful.
Yeah, tell me about it. We just tour with bands and are constantly doing stuff. I’m 23 now, but when I started I was 14/ 15 and I went straight out on European tours with other bands. We just played used to play with bands and I’d be like, “What is this? Is this good?”. And you get really cynical about stuff, but I think Alex Baker sort of flicked something and made me back into thinking that there is some good stuff out there.

Are there any bands or artists out there that you don’t really think should get the level of hype they do?
This is really weird. I’ve never been asked this before [laughs].

I love it!
Oh I do, and I totally bitch about bands all the time. I just don’t know if it actually has an impact on me as a bad person. Like saying that a band is bad, it’s all subjective, isn’t it? If someone is reviewing it and is like, “I don’t like this band”, it’s like, “So? I don’t think they’re writing stuff for you are they?”. But… bands… I can’t even say it. I know exactly who I’m thinking of.

[Laughs] everyone does this!
I just genuinely can’t say it because I know that band likes me as well and what I’m doing. I really, really wish them all the best but I just really don’t want them to be successful in music. I just want them to crash and fail – big time. That’s just one band.

[Laughing] Okay, we’ll rap it up so there’s not too much negativity.
Be sure to catch Grumble Bee at Slam Dunk next month!