One day. Four venues. Too many unmissable bands to count. The birth of brand-new festival Ritual Union is nigh, and you’ll want to snap your ticket up ASAMFP. 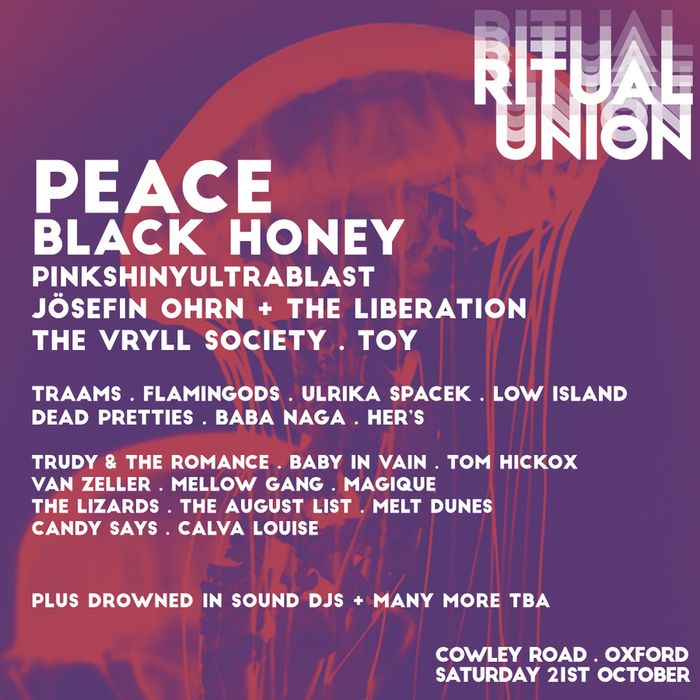 One day. Four venues. Too many unmissable bands to count. The birth of brand-new festival Ritual Union is nigh, and you’ll want to snap your ticket up ASAMFP.

A short journey from Oxford’s city centre, Cowley Road is set to witness some of the very best local and international talent this October. There has been no expense spared at the launch of this multi-venue day-long extravaganza; we’re spoiled for choice, and can only pray for no major clashes. We can’t bloody wait.

Topping Ritual Union’s debut line-up are indie rockers Peace, likely to bring in tow much of their dedicated fanbase (particularly at the weekend’s bargain price). Frontman Harrison Koisser’s iconic lyrics and well-known back catalogue combined with the undoubtedly dynamic atmosphere of the event is sure to put the guys onto a winner. Just beneath are the fantastic Black Honey, raring to go with their stunning vocals and vivacious guitars. Our only question is when will these guys finally stop teasing us with incredible new material and put out an album?

Predictably, there’s no chance us over at Raw Meat will be missing out on mega babes Baby In Vain’s set. What with a spectacular debut record (released in August) now under their belt, we can’t wait to see what the unstoppable trio will now go and do next.

Speaking of fantastic, noisey rock sounds, Japanese four-piece Bo Ningen were a recent addition to Ritual Union’s many promises of awesomeness. And absolutely not to forget punchy, post-punk rifflords TRAAMS.

Prepare for Trudy and the Romance to be the next big thing in terms young, tender indie chaps. Catch them now and bask in your future bragging rights.

Psychedelia comes across as a running theme when dissecting the line up (no complaints here). Pinkshinyultrablast will be popping over from St. Petersburg for their only festival appearance of 2017, no doubt with an array of lovely pedals and panels and such for their dreamy shoegaze vibes. Fellow European psychs Jӧsefin Ohm + The Liberation are also set to make an appearance, and less exotic Brighton-hailing TOY will be treating us to a set of their gorgeously transcendent tunes.

After releasing LP ‘Modern English Decoration’ earlier this year, Ulrika Spacek are yet another gem in the crown of Ritual Union. Soft yet memorably considered, the band will surely be one of countless highlights across the day.

With as much impressive talent in one day than you might expect to see across three or four days at most festivals, Ritual Union is a cavern of musical promise. All we can say is, bring it on.