Once again, Raw Meat DJs will be attending and assisting Heavy Leather Promotions' night Roadkill, and it's the first of 2015. We can safely say that things are going to get scuzzy. 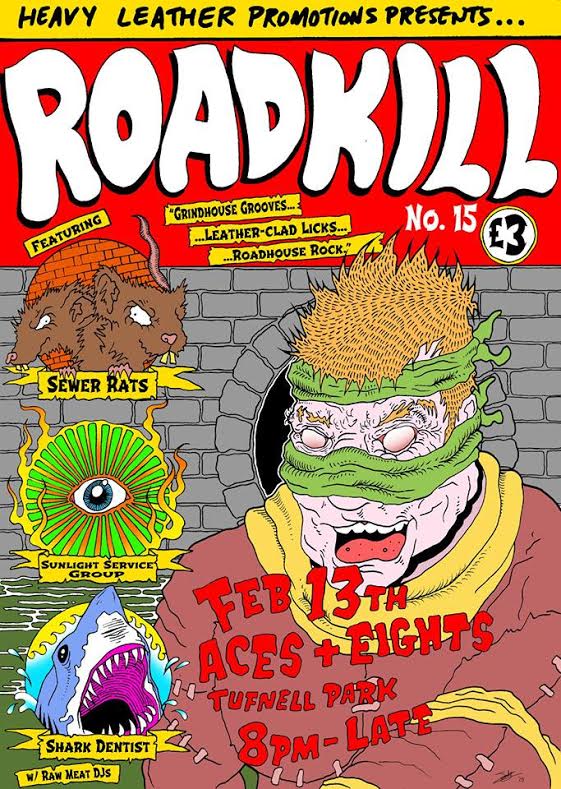 Once again, Raw Meat DJs will be attending and assisting Heavy Leather Promotions' night Roadkill, and it's the first of 2015. We can safely say that things are going to get scuzzy.

Once Finny D and DJ Daz have sufficiently warmed up the room, first act Shark Dentist will hit the Roadkill stage. The band throw punks riffs under deadpan lyrics with psych darkness, all while retaining a sense of humour.

Next up the psychedelic Sunlight Service Group will wow and amaze with one foot in doom and the other in seventies psych. They're a band whose recordings indicate a much heavier live performance - something we're very much looking forward to.

Finally, headliners, Sewer Rats will desecrate the stage. These guys are the newest signing to our friends at Fluffer Records (read our interview with the Fluffer team here) so you know they've got some serious riffs before even having to listen. Sewer Rats are a wonderful example of the British rock back catalogue being used to create something new. There are Motorhead heavy metal tempos and vocals, while the guitar solos crawled out from under a screeching grunge rock. Aces & Eights will be a fantastic venue for a band like this to loose their shit in.

We'll be on the decks from eight until everyone's gone home, it's only £3 entry and the closest tube is Tufnall Park. I've already got a good feeling about this night - and not just because it's on Friday 13th.