Raw Meat DJs will be attending and assisting Heavy Leather Promotions’ Roadkill. This month we'll be spinning tunes between and after Muertos, The Carnations, and The Sly Persuaders. 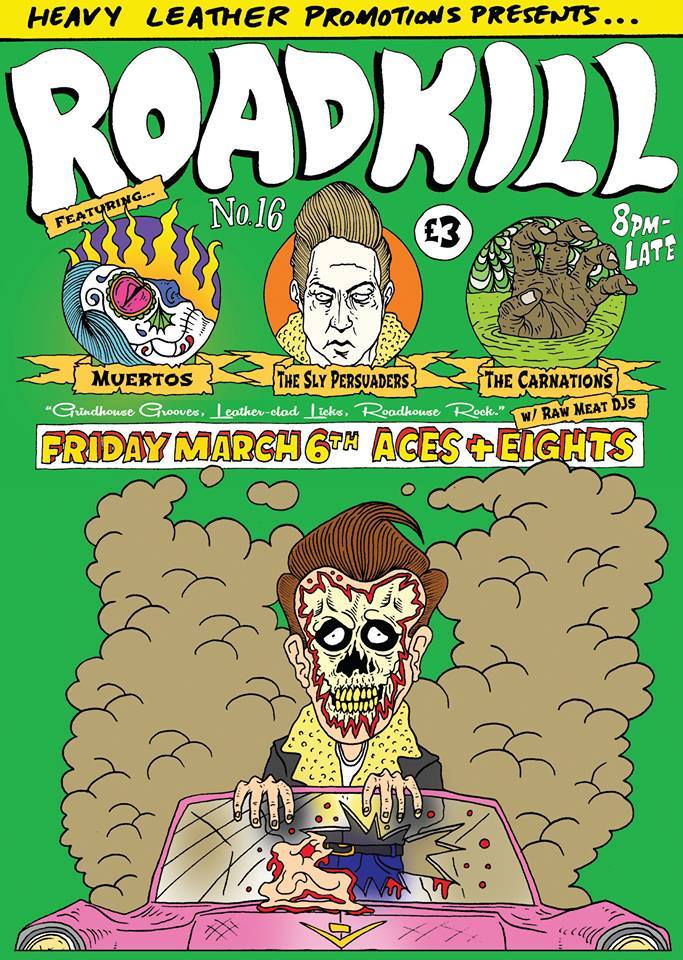 Raw Meat DJs will be attending and assisting Heavy Leather Promotions’ Roadkill. This month we'll be spinning tunes between and after Muertos, The Carnations, and The Sly Persuaders.

Kick starting Roadkill with spooky garage rock harmonies, slight twinges of rockabilly and overall feelings of The Pixies, is Muertos. This three-piece write songs that go from one-note riffs and drawling, ramshackle vocals to walls of fuzz and thunderous drums. The dangerous end of freakbeat mixed with psychedelic recklessness in their melodies makes these guys unique and unpredictable.

Main support, The Carnations couldn't be clearer about where their influences come from. Their aesthetic and their sound both scream sixites. They've got soaring backing vocals, early Beatles guitar riffs (albeit heard through a good deal more fuzz) and their song writing wouldn't be amiss on a Monkees record. Their melodies are catchy, the layers of guitar riffs are tasty and the bass lines will make you want to pop out and grab yourself a pair of Chelsea boots - very Eel Pie Island.

Finally, Roadkill headliners, The Sly Persuaders peddle unashamed rock n fucking roll with a garage reverb wobble. From the modern school of Black Keys, having studied the classics of The Mummies and taking an elective module in Queens of The Stoneage (how much longer can I keep this pun running?), these guys build layer after layer of riffs, feedback and fuzz before hanging it all on irresistible hooks. With guitar solos from space and the vocal talents of Elvis Presley, their live performances never disappoint.

Raw Meat's Darren and Finn will be on the decks from eight until everyone’s gone home, it’s only £3 entry and the closest tube is Tufnall Park. See you there.

Muertos
The Carnations
The Sly Persuaders