The weather is picking up, we've just been paid, we've all got a whole Summer of weddings to look forward to crashing, and to add compliment to cuddle it's Roadkill this weekend. 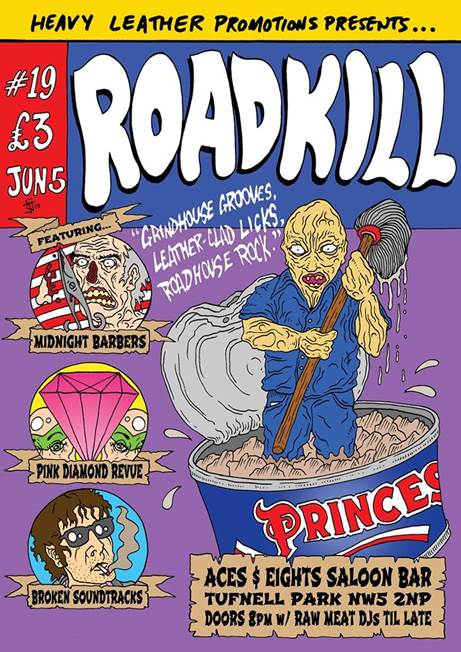 The weather is picking up, we've just been paid, we've all got a whole Summer of weddings to look forward to crashing, and to add compliment to cuddle it's Roadkill this weekend.

This month we'll be spinning tunes before, in between and after Broken Soundtracks, The Pink Diamond Revue and The Midnight Barbers.

After you've all pretended you're supposed to be on the guest list and we've swanned about with headphones round our necks, first band of the night, Broken Soundtracks will get things started. Screeching guitars, cyclical bass lines and robotic drum beats pave the way for feedback and monotonous vocal preachings. The below track was only put online this week, so it's brand spanking new. There are Kraut elements and electro influences in the rhythm section.

The psych stylings of The Pink Diamond Revue allow for heavily affected guitar lines to wobble along under minimal spaced out vocals and psycho garage lead guitar riffs. Like a lot of good psych bands, there's a cowboy/ Western vibe in the delivery with the sort of spoken word elements you might find on a film soundtrack, or in more electronic (while still being bands) bands like Poe.

Finally, headliners The Midnight Barbers will bring their fuzzy, footstomping tunes to the stage. There's a timelessness to their garage; tremolo guitars play 1930's riffs while the drummer bangs out 1950's rock n roll beats, and the sandpaper vocals bring the whole package firmly back to the now. They've just finished shooting the music video for their latest single, 'Business' so let's all become big fans in time for that to drop.

Then you'll have us to contend with, spinning whatever the hell we feel like until around midnight, when we'll all stumble upstairs to move on to the harder stuff.