We're headed back to Slam Dunk Festival, and as you can imagine, we're already pretty pumped. 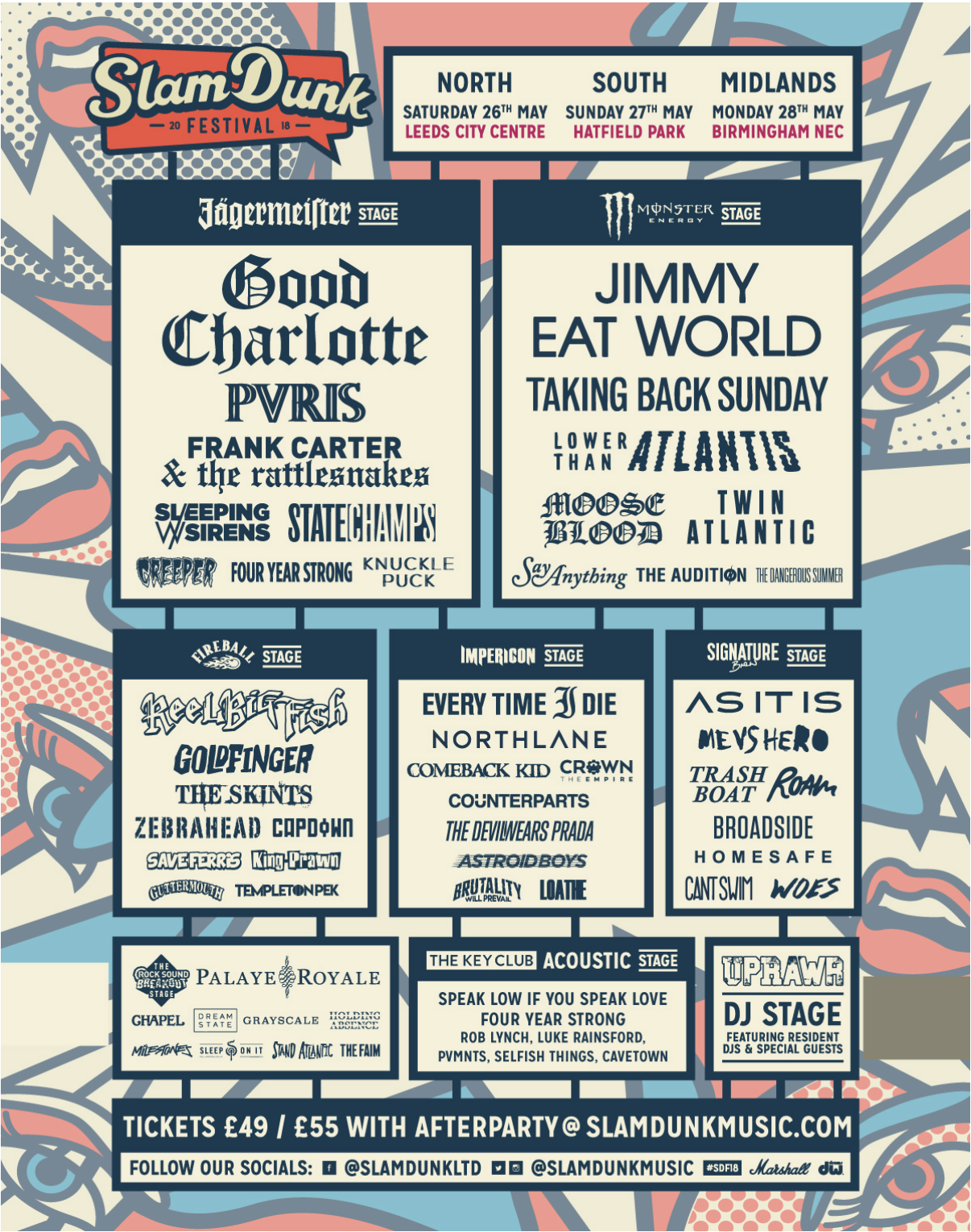 We're headed back to Slam Dunk Festival, and as you can imagine, we're already pretty pumped.

Slam Dunk is back for 2018 with one of the strongest line-ups to date and the usual three event locations; Leeds, Hatfield and Birmingham. The punk/ emo festival in the south usually takes place at the University of Hatfield, but due to its ever-growing popularity, the organisers have decided to move the whole party to the twice as large, Hatfield Park instead.

Our excitement (and the line-up) is well and truly bursting at the seems, including a showcase of must see acts, to be split up across eight stages.

The Jagermeister Stage will be home to pop-punk heroes, Good Charlotte for their debut appearance at the Slam Dunk. They'll be joined by fellow Americans, PVRIS as well as Frank Carter & The Rattlesnakes, Sleeping With Sirens, State Champs, Four Year Strong and Knuckle Puck.

The Monster Energy Stage will be playing host to the the legendary Jimmy Eat World who are also first timers to Slam Dunk. As well as Taking Back Sunday, the absolutely brilliant Lower Than Atlantis, Scottish alternative rock band Twin Atlantic, Moose Blood, Say Anything, The Audition and The Dangerous Summer.

Also on offer for our viewing pleasure are the remaining six stages; Fireball, Impericon (which is quite well known for hosting heavier acts), Signature Brew stage, The Rock Sound Breakout Stage, the Key Club Acoustic Stage and last but certainly not least the Uproar DJ Stage.

While we're obviously expecting thrilling performances from all the headliners and bigger acts, there are more than a few artists that you might not be aware of (yet), which we think are definitely worth checking out.

This first band is one that I recently had the privilege to see playing Cambridge Junction supporting Lower Than Atlantis earlier this month, Aussie quartet The Faim. The band have recently signed to BMG records and released their debut single, 'The Saints of the Sinners', which was actually co-written by Fall Out Boy's Pete Wentz. They're also working on a debut album which is due for release later this year.

Next up is Brighton based pop-punk band, As It Is. Formed in 2012, signed to Fearless Records in 2014 and with three punk-emo melodies-heavy albums under their belt, they'll be headlining the Signature Brew Stage.

Another one worth watching is Stand Atlantic. Originating from Sydney, they released their single 'Coffee At Midnight' after signing a deal with Rude Records which got them support slots with both New Found Glory, and fellow Slam Dunk alumni, State Champs.

One performance guaranteed to be unmissable is The Audition. All five members of the group will be reuniting for the first time in six years for a worldwide exclusive set on the Monster Energy stage. Set to be epic.

Lastly, I'm really enjoying US punk-poppers, Grayscale. Originally from Philadelphia, the band released their first EP, Change after signing to the same label as As It Is.

Known as a, "rite of passage for all rock, emo, punk, ska and metal fans,".Slam Dunk 2018 and its brilliant line up is set to more than live up to that statement.