We sent our intrepid punk rock reporter Courtney Murison to check out Slam Dunk Festival 2015 in Hertfordshire. Now she's fully recovered, she can share her experiences with us all. 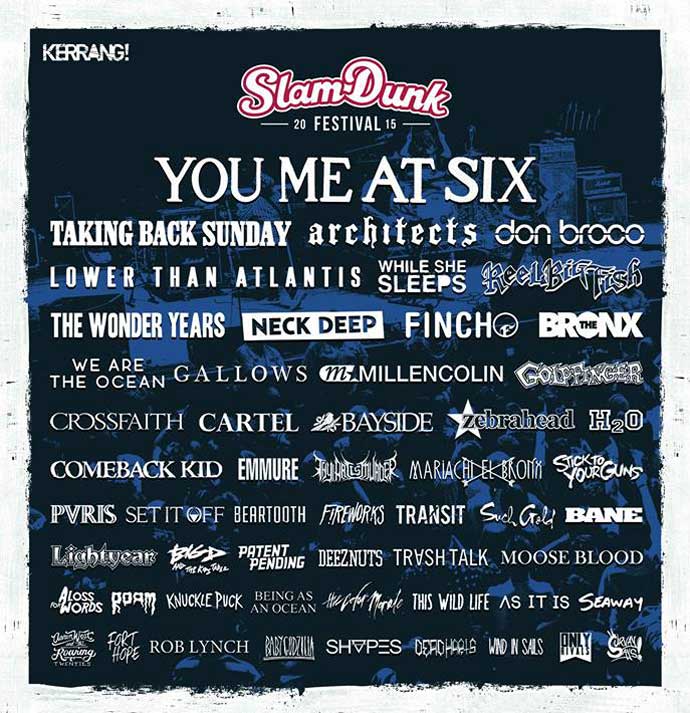 We sent our intrepid punk rock reporter Courtney Murison to check out Slam Dunk Festival 2015 in Hertfordshire. Now she's fully recovered, she can share her experiences with us all.

So, without further ado; newly but hugely loved rock band PVRIS were the second act to hit the Main Stage of the second date of slam dunk festival at Hatfield's university. With their awesome rock riffs and synth tones they created an awesome atmosphere. Opening with their song 'Fire' and finishing with 'My House' they didn't disappoint a single soul; they drew in a massive crowd and got everyone on their feet. These guys have the potential to be massive - we're expecting big things.

Generic pop punk band, Neck Deep returned for the second time to Slam Dunk Festival. Opening with their new song 'Can't Kick Up The Roots', they attracted new fans and got the old ones crowd surfing. The crowd were very energetic and everyone was singing along when they got their acoustic guitars out for their biggest crowd-pleaser, 'A Part Of Me'. With a new album coming out, 2015 is going to be a huge year for Neck Deep.

Stick To Your Guns were the fifth band to kick off the Impericon.com Stage; sheer hardcore heaven. The room was heaving with fights, moshing and crowd surfing. The band truly connected with their fans, giving out speeches and advice throughout their set and as they came to their most popular song, 'What Choice Did You Give Us', the crowd went insane. Let's just say that security had a pretty tough time. This band truly laid down the meaning of a hardcore show.

Later on in the day on the Monster Stage we were greeted by the finest of metal foreign visitors, Crossfaith, hailing all the way from Japan; these guys know their metal! The crowd responded in kind with moshing, wall of deaths and a palpable energy. With great songs like 'Jägerbomb', 'Monolinth' and their almighty, absolutely massive cover of The Prodigy's 'Omen', they proved to be one of the best live bands of Slam Dunk 2015.

Headliners of the Main Stage, You Me At Six stormed Slam Dunk Festival and drew in the biggest crowd of the day. Starting off with songs like 'Save It For The Bedroom' and 'Lover Boy', the show was then cut short just after they performed 'Jealous Minds Think Alike' due to a medical emergency - a fan believed to have broken their neck. The show was paused for twenty minutes, but was soon brought back to life with unneeded apologies, and a performance that more than made up for the delay. You Me At Six finished the night with the best reactions from the crowd and ended this year's Slam Dunk Festival with a bang.

Monster Stage headliners, Architects know how to start off a year - with a massive UK tour, followed by Slam Dunk Festival, and now off to tour the rest of the world, these guys killed it. The crowd was in fits, singing along with their opener 'Grave Digger'; a massive hit from the band and one that created a truly raw atmosphere. Part-way through the show they stopped to tell us all about a fan so dedicated that they had traveled across the world to see them, giving them heartfelt thanks. Their set was helped by the epic light show that followed along with their awesome live performance.