Including music from Lower Than Atlantis, PVRIS, Sleeping With Sirens and the ever eccentric Frank Carter. Words and images by the Raw Meat power couple, Kane and Kim. 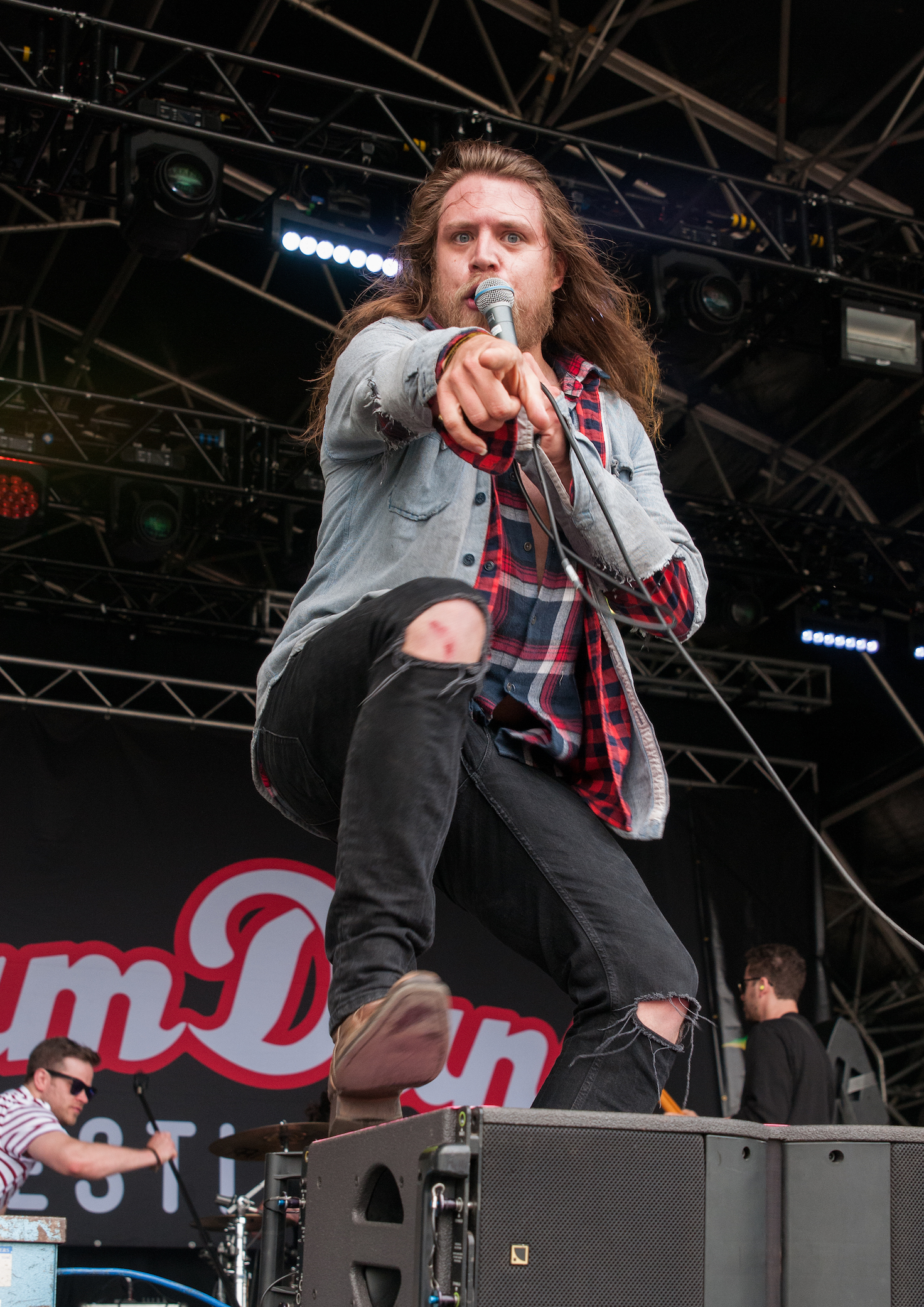 Including music from Lower Than Atlantis, PVRIS, Sleeping With Sirens and the ever eccentric Frank Carter. Words and images by the Raw Meat power couple, Kane and Kim.

Upon entering the site, it took us a good 20 minutes to get our bearings and find out where things were, despite there being a giant map on display at the entrance and also on printed flyers. At the site there were eight stages with not one, but two 'main' stages. I had aspirations of being as thorough as possible, trying to check out as much as I could, which meant a lot of running back and forth in no time to see what I could fit in the day.

I saw brilliant sets from Knuckle Puck, Homesafe, Grayscale, Asteroid Boys, Sleeping With Sirens and more. But there are some in particular that stood out for me. Firstly lets talk about the awesome Slam Dunk exclusive performance from The Faim. They performed their debut single 'Saints Of The Sinners' as well as 'Infamous', 'Midland Line' and their newest release 'Summer Is A Curse'. The band's front man Josh Raven couldn't help himself from messing with the photographers and fans in front of him. The whole set reinforced what we already knew about The Faim's relationship with their fans.

Another act that packed out the Rock Sound Breakout tent was pop-punk band Stand Atlantic. Also from Oz, the band consists of vocalist/ guitarist Bonnie Fraser, bassist David Potter and drummer Jonno Panichi. They were stood under a blanket of strobe lights as they performed hits including 'Chemicals' and 'Push'. Unfortunately the band were completely overshadowed by the efforts of the security team standing in front of the barriers.

Many fans were seen crowdsurfing as the band smashed out anthem after anthem, with guys and girls continuously being sent flying towards the stage. While every guard in front of the barrier, tapping each other on the shoulder for back up, scurried like mice towards the front row to catch whoever was being thrown their way.

Besides The Audition, the Monster Energy Stage brought us performances from Taking Back Sunday, Lower Than Atlantis, Mooseblood (who, despite the current controversy surrounding the band, were still able to pull in quite an impressive crowd), headline act Jimmy Eat World, Say Anything, The Dangerous Summer and Scottish alt rockers Twin Atlantic. Twin Atlantic's set was one that I was looking forward to - I narrowly missed out on seeing them live at Truck Festival back in 2017 due to it being water logged - and they certainly did not disappoint.

As the band members entered the stage one by one, the sound builds, until lastly, front man Sam McTrusty strolls out wearing a burgundy suit and floral shirt, shouting, "How are you all doing mother fuckers?" The place went insane. Their set included all the hits, 'No Sleep', 'Heart & Soul', as well as the more somber 'Brothers and Sisters' - causing floods of swaying hands and karaoke sing along.

Meanwhile over at the Signature Brew Stage, Brighton based emo band As It Is had returned to Slam Dunk for the third time and completely owned their live set. Vocalist, Minnesota-born, Patty Walters knew every trick in the book to work the crowd as he led the band into probably one of the best shows of the day. The set list included singles 'Pretty Little Distance', 'Concrete' (taken from their Happy Never After EP) and infectious new single 'Wounded World'.

Over on the Jagermeister Stage festival goers were treated to some awesome performances throughout the day, but the stand-out sets for us came before the two headliners. American rock band PVRIS (pronounced 'Paris') didn't waste any time, jumping straight into their first song, the almighty 'Heaven' from their most recent album All We Know of Heaven, All We Need of Hell. There were certainly some hardcore PVRIS fans on site, also known as the PVRIS CVLT - we even caught a glimpse of a young fan at the front that this gig meant the world to, shedding tears of joy throughout the show.

Vocalist Lynn Gunn showcased a multitude of talents as she moved around the stage, from one instrument to the next. I already knew that she had striking vocals, but I had no idea she was so talented. Dressed ready for the boardroom she played guitar, keyboard, synths/ soundboard and even drums. Crazy talented.

Special mention also has to go to the bonkers set from Frank Carter & The Rattlesnakes. One I won't forget in a hurry. Frank Carter alone is renowned for his on-stage antics. Walking on in nothing but short shorts and a pair of pink trainers - simple but effective - his entrance swarmed with sirens and heavy guitar riffs. Early on, Frank decided to leave the stage to, "take a walk". Stood upright he walked balanced on the shoulders and hands of fans, causing bedlam. He did at one point tone down the antics to speak about respecting women wishing to crowdsurf without having the fear of being handled inappropriately. "We need to have love, kindness and respect for women, if not I will be using your heads as footballs." He also dedicated a song to his daughter. Aw. After utter madness and plenty of screamed "fucks", things began to calm before the evening's headline acts took to their respective stages.

Both headliners, Jimmy Eat World and Good Charlotte were on at the same time. We chose Good Charlotte, I owed it to my teenage self. And they went on to supersede all my expectations. As confirmed by vocalist Joel Madden, headlining Slam Dunk Festival (in all three locations) was the largest gigs they've ever played in the UK.

Entering the stage playing 'The Anthem' as confetti cannons exploded was a pretty high starting point. Stood at the barriers I could feel the heat from the pyrotechnics on my face.

They played all the hits, or what they referred to as, "the old shit". The set included 'The Story Of My Old Man', 'Boys and Girls', 'Little Things', 'Riot Girl' (dedicated to all of the women in the audience), and a very emotional performance of 'Hold On'. Brothers Joel and Benji came forward to express their immense gratitude for the dozen years of support since they formed back in 1996. They even reeled off a list of fellow musicians that have been there for them through thick and thin, shouting out Sleeping With Sirens, Architect and Bring Me The Horizon.

I didn't expect to feel emotional when watching Good Charlotte, but it really did pull on the heartstrings. Especially after seeing Joel becoming choked up. He went on to say, "If you keep getting back up, you won't be sorry". Their set also featured the announcement of a new album Generation Rx, featuring new single 'Actual Pain'. A break in their usual pop-punk frivolity. They also shared that they'll be hitting the road for a UK tour next year, including the beautiful Ally Pally in London.

As anticipated, this very emotional (who knew?!), punk-drunk set was brought to a close by a roaring performance of 'Lifestyles Of The Rich And The Famous'. Meaning only one thing, Slam Dunk Festival is done for another year. Honestly? I had probably one of the best days of my life this year. This one was for you teenage Kim.

Images by Dad of the year, Kane Howie.