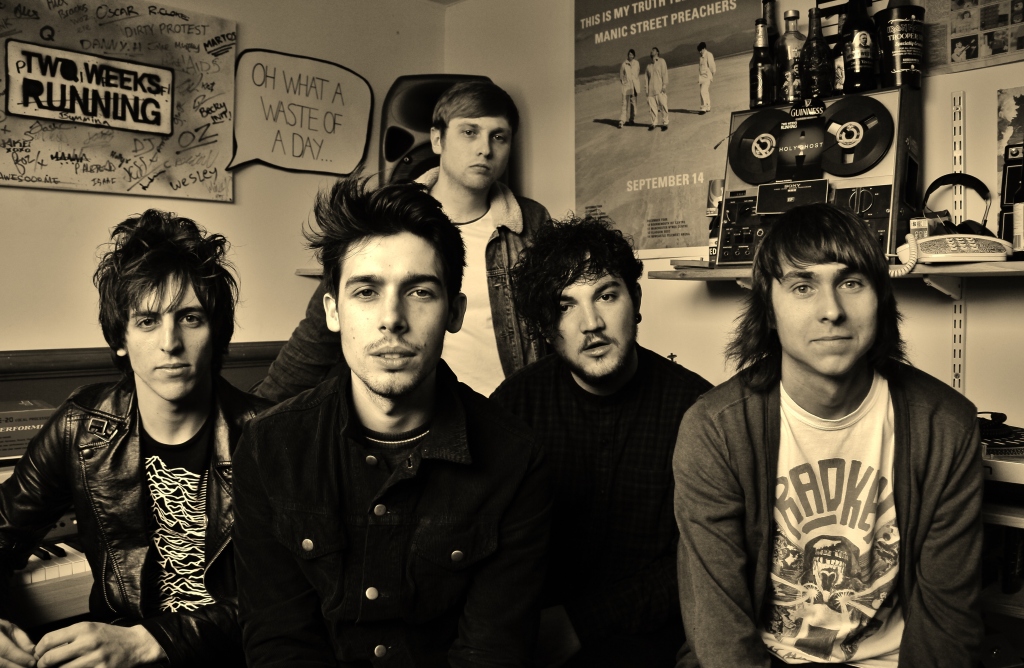 The single, 'Bullet Train' is a hark back to classic, second wave indie - think Pigeon Detectives with a dash of Arctic Monkeys.

RAW MEAT: Tell us about your local music scene; what’s your favourite local venue, are there any record labels or stores we should look up, what’s the scene like where you’re from?
TWR: We’ve played a couple of local shows at the Night & Day Café in Manchester this year and they have been really fun to play. The venue has been packed out and the atmosphere has been great. The venue was threatened with closure earlier on in the year due to noise complaints from one resident living above it at the time but thankfully they managed to overcome it after tens of thousands of people signed a petition to keep it open. It’s good to be able to play a venue that has hosted some of the biggest bands in the country on their way up the musical food chain, Arctic Monkeys, Bloc Party, The Maccabees, Kasabian to name a few, and you can still today see quality bands playing the venue who go on to sell out bigger shows across the country just months later.Other venues to check out a little closer to home in the Bolton area are the Dog & Partridge, which is currently having a wall re-built after someone recently ploughed their Land Rover into it; White Tiger, which is a brand new music venue which opened this year after the new owner decided to transform the place and stick a brand new stage and sound system in there; and Blind Tiger which is a venue / indie club where you can often find one of us stumbling around in the early hours of any given weekend. All these venues do their bit to keep the local music scene alive by hosting great shows every week.

Just across the street from the Night & Day you'll find Piccadilly Records which is a great store for getting your hands on the latest vinyl releases and you may even find a rare Two Weeks Running EP if you’re lucky. Hopefully similar independent record stores across the country are able to survive the digital age as after all, it’s so much more satisfying going out to a store and finding your new favourite band than just clicking on the ‘download’ button isn’t it?!

Name one track/band that you love from the past.
The Clash – 'Train In Vain'. I think it’s a surprisingly poppy sounding track for them but it’s one to get a good dance on to.

Name one track/band that you’re loving right now.
The Wytches debut album is going down a treat at the minute.

Name one track/band that you think we should listening out for in the future.
Our Fold are a band from our home town who have been making top tunes for the past few years and will release their debut album in 2015 so keep an ear out for that.

What are you up to now?
We’ve got a couple more gigs left until the end of the year. The first one is at The Ruby Lounge in Manchester for This Feeling’s club night on 12th December. Then we’ll be saying goodbye to 2014 in style with a hometown gig at Blind Tiger in Bolton on New Year’s Eve.

What can we expect from you next?
We’re working on some new songs at the moment. We’ve got about five that are in progress so we’ll be looking to record them early next year and then come up with a plan to release them. We’ve historically played songs live as soon as we’ve written them but we’ve decided to take a different approach this time and plan on recording them first before we release them to the world to keep them as fresh as possible.

Download 'Waste of a Day' for free by clicking here.