The term genius is thrown around a lot (to the extent that this sentence itself has become a cliché), but Tyler, The Creator is pretty close. At least if we take his word for it. 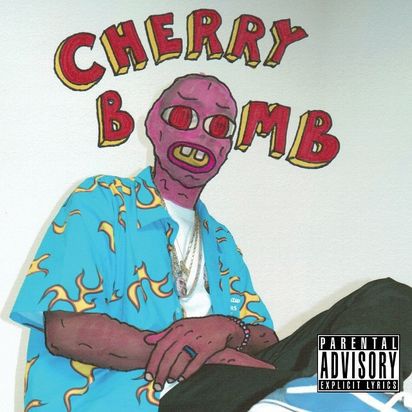 The term genius is thrown around a lot (to the extent that this sentence itself has become a cliché), but Tyler, The Creator is pretty close. At least if we take his word for it.

Tyler, the Creator’s fourth studio album Cherry Bomb is his latest attempt for people to notice him, as he grants the listener a ticket into the twisted psyche of an artist that’s split audiences since the beginning. If you’re a fan of Tyler you’ll revel in his abilities to seemingly discuss the darkest of emotions in one song before moving onto rapping about something completely inane; if you’re part of the other side you see the thematic shifting as a pointless exhibition laden with misogyny and homophobia.

Tyler wears his N.E.R.D love on his sleeve in first track ‘DEATHCAMP’, a song built around a crushing punk inflection with aggressive distorted guitars. Throwing a shout out to N.E.R.D’s debut album In Search Of…, going as far to say it’s better than Nas’ Illmatic, shows Tyler’s preference as an artist. And like Pharrell, Tyler shows his true brilliance through his production. Cherry Bomb is his most ambitious album from a production standpoint and Tyler proves he is up to the challenge. Infusing elements of soul, jazz, rock and industrial hip-hop, Tyler balances all of them beautifully. He seems to not fear chaos but revel in it; regularly a song will start frantically before morphing into a completely different vibe with a new beat or the occasional jazzy ending.

The strength of the album is definitely the production with Tyler’s rapping not even needed at times. In the title track ‘CHERRY BOMB’ Tyler’s verse is almost incomprehensible due to the level of distortion. The rapping adds very little to the track which begs the question, why have it at all?

Throughout the album Tyler has found unique ways to hide his rapping, be it through heavy distortion, abrasive guitars or overly loud drum sounds. Although he seems destined to hide his vocals Cherry Bomb’s highlights are when Tyler’s vocals are at full force. ‘SMUCKERS’ sees features from Lil Wayne and Kanye West, three of the most divisive forces that rap has ever seen and possibly the biggest nod to the growth Tyler and Odd Future have experienced. No longer is he the weird kid rapping with his friends, he’s moved onto the big league and hasn't let himself down at all. With Kanye dropping one of his greatest lines; “Richer than white people with black kids / Scarier than black peoplewith ideas”, and Lil Wayne finding his vintage sound provides his best verse in a while. ‘SMUCKERS’ is without doubt the track of the album and the track that could be the conversion point for anyone still doubting Tyler’s talents.

With Earl Sweatshirt recently receiving numerous plaudits with his recent album I Don’t Like Shit, I Don’t Go Outside and even getting a shout out from Kendrick as the best rapper in the game at the moment, you’d be forgiven for thinking that Odd Future is becoming a one person show. With the release of Cherry Bomb, Tyler, the Creator is letting the world know he’s still here and is still as beautifully brash as ever.