Wampire leisurely stroll a thin line between the realms of genius and madness, often plodding into sheer silliness on the way. 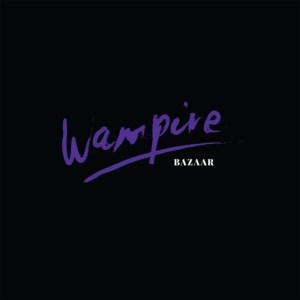 Wampire leisurely stroll a thin line between the realms of genius and madness, often plodding into sheer silliness on the way.

Bazaar is the follow-up to 2013’s Curiosity. Wampire themselves have grown into a five piece, and the new sound truly flourishes on this latest release.

The album opens with terrible B movie-esque, maniacal laughter bursting into ‘The Amazing Heart Attack’. The sound is reminiscent of the Dead Kennedys; that same dark, lo-fi, horror movie sound. It's madness, it's silliness, but as the drums and guitars enter, you're hooked. It makes sense and it works. The chorus refrain sticks and you've joined Wampire on this below average horror movie romp. The pace continues with ‘Bad Attitude’, it kicks you around and leaves you bruised by their vicious side. A band with no inhibitions, it's old school and it's catchy as sin. ‘Bad Attitude’ is simpler and more aesthetically punk than ‘The Amazing Heart Attack’, but it's over before you have a chance to complain and ‘Fly On The Wall’ rolls in. Slower paced, with a gorgeous bass line, drenched in punchy keys, it's exciting and sexy, shaking off the punkier vocals of  the opening tracks for a sleeker, moodier croon. Then halfway through, the track strips down to acoustic guitar and whistling before returning to a more violent vocal and frankly, it is awesome. Three tracks in, and Wampire are sounding at the top of their game, they sound driven and sure in themselves... and then - ‘Wizard Staff’.

‘Wizard Staff’ makes this album. It's brilliant; swaggering somewhere between psychedelia and off kilter pop. Hook ridden, groove fuelled, genius. It's a cross between Pinkerton era Weezer and Smith Westerns; soaked in this hazy, solemn gloom; it's grotesquely all things Wampire and it's fantastic. The album opened as a B movie but after ‘Wizard Staff’ and with ‘Way Too Stoned’ it's grown into something new and monstrous - a sound forgoing the cheap thrills and now pounding your ears with a real story. For the most part ‘Way Too Stoned’ is an instrumental, a brooding beast letting your ears settle after ‘Wizard Staff’ and before ‘Millennials’. Cut from the same cloth of brilliance, opening with a deeply layered a cappella chorus; it's beautiful, it's shameless and the rest of the track just follows suit so that it all moulds together to create a vibe, a mood. Each song, a time capsule, from its own never subtle world.

The album begins to close, in a lacklustre fashion, with ‘Sticking Out’. The last three tracks being so powerful it's a shock to drop back into the sound of the album's now humble punk beginnings before the penultimate track ‘Life Of Luxury’ enters. Again there's a new sound, this time vaguely Kinks, and its title fits it perfectly. It's retiring and relaxing, far from the strongest track on the record, yet somehow it feels as though it's a necessity to bring Bazaar to its close. Like all the tracks on this album, it somehow works.

Bazaar opens as a lo fi student film, builds into a blockbuster, and closes before it feels finished. The credits would roll to 'People Of Earth', the album's conclusion. It's melancholy and pretty, but sadly this doesn't cut it for Wampire any longer, I found myself wanting to skip back to the earlier tracks and listen to them over and over and over.

Bazaar feels like an homage to something I can't put my finger on. Perhaps they're just celebrating being Wampire, which they should. This album is fucking brilliant.