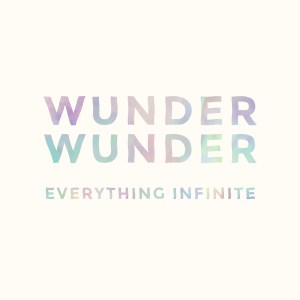 Wunder Wunder are an homage to the sweet pop-psych sounds of the sixties and seventies, that never shy away from their influences.

The record opens with title track, 'Everything Infinite'; its sixties guitar riff doused in deeply layered vocals with a heavy mishmash of synths and dream sounds instantly pulls you in. It's warm and eerily familiar; a sun splashed Temples, riding the sounds of Tame Impala. It's easy to get lost in their style and they happily wear their influences on their sleeves. The album rolls into its next track, lead single, 'Coastline'; infectious and poppier than its opener, exchanging the opening riff in favour of spaced out chords and building synths. It's easy to zone out with them; Wunder Wunder suck you into a lazy summer mood to fade out to.

'Hail The Madman' cuts away from layered vocals in favour of a sharper, dancier feeling. It's David Bowie meets Ariel Pink, and it's a welcome change of pace. Less of a wave crashing over you, as the first tracks, and more a vicious poke in the side to get you on the dance floor. Its tastefully lo-fi and quirky synths complete the picture. Wunder Wunder are here to take your ears on their own sonic, sun fuelled adventure. Each song takes you in a new direction and 'Midnight Hours' brings you right down as you’ve just come up. With its sombre vocals, acoustic guitars and a sweet, soft chorus reminiscent of Empire of the sun, it's a change of pace; dreamier yet relaxed as ever.

'Trouble In Utopia' is a return to the heavier guitar, creating that sixties feeling and giving the album its catchiest chorus. Following the chorus is another glamorous guitar riff with all the swagger of the Summer of Love kept intact; the closest track (in feeling) to 'Everything Infinite' and it sits perfectly. 'Wonderful Way' and 'Sure Struck' are gorgeously pop: 'Sure Struck' with its foot tapping, pounding rhythm keeping you smiling and 'Wonderful Way' culminating in a brilliantly infectious vocal refrain poking through its layers of sound scape make for two great tracks.

Everything Infinite is an album that doesn't warrant skipping songs. It's a fluorescent, lurid bath in everything Wunder Wunder. Each track bringing something worth indulging in to the table. No big singles shrouded with filler to make up the minutes; this is an album, in the bluntest sense, where every track is worth listening to. Just sit down in the sunshine and let it play through.

It's not faultless by any means. 'Coastline's reprise, aptly titled 'Coastline Reprise' is unnecessary, as 'Dreams Of The Fall' gives the album a sense of petering out rather than the sweet sun soaked conclusion you’ll want. But isn’t that always how the British Summer ends? No sudden peak and then fall to winter, but slowly trickling away leaving you awkwardly cold and reminiscent.