It looks like our intrepid reporter made it all the way through Y Not Festival's tenth bithday weekend. It also looks like we should have a sponsorship deal with Hooch. 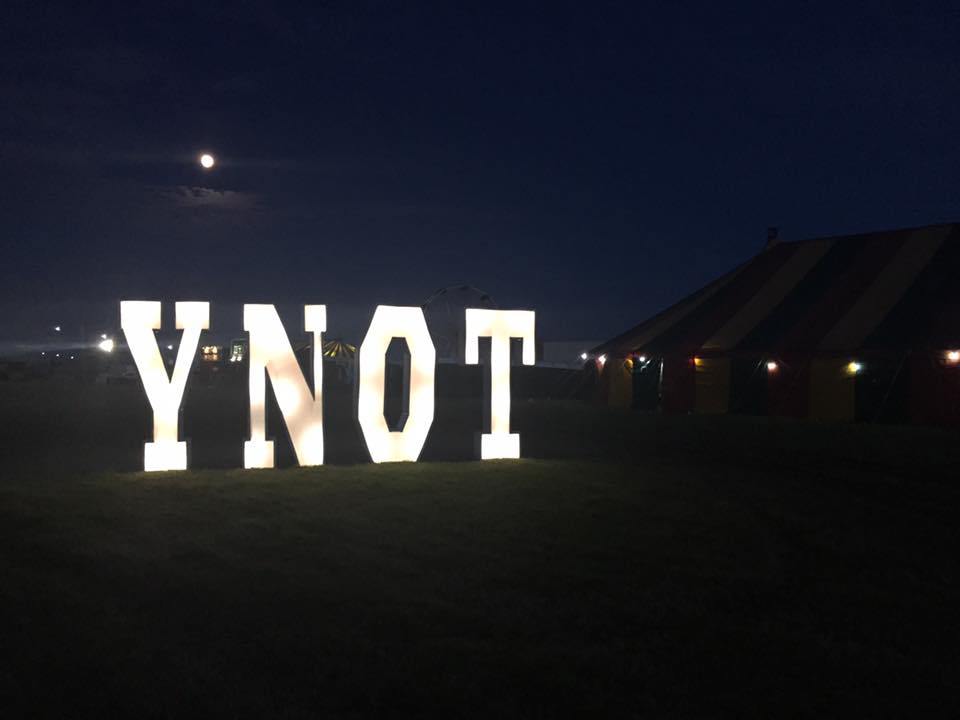 It looks like our intrepid reporter made it all the way through Y Not Festival's tenth bithday weekend. It also looks like we should have a sponsorship deal with Hooch.

Beginning the final day of Y Not Festival, folk band, CC Smugglers, open up the main stage and provide a good laugh for those struggling to wake up. Their jazz-folk-country ‘rock’ is bemusing and out of place, and their chat on stage makes them even more questionable – speaking like a misogynist and asking the crowd to “OPEN UP A PIT OF DEATH” does not make you a rock a band. It makes you look like a dick. But, nonetheless, their music is tasteful for the family spectators at Y Not, and, at the very least, amusing.

Mancunian band, Blossoms, restore faith in the Sunday line-up with their unique mix of classic and indie rock, that they so modestly call ‘Ethereal Nostalgic Sonance’. Dressed all in black with a painted miserable expression; Blossoms certainly look the part. Their unique style and sublime riffs are executed with such precision it makes it difficult to believe the band only formed in 2013. With one charming tune after the other, Blossoms are a treat for the ear. Cherish them.

Ahead of their debut album, The Bohicas bring their fresh-cut rock n roll to the Quarry. Live, their blues slickness screams through and through. Lead vocalist and guitarist, Dom McGuinness, shakes his hips in time to the groovy ‘Where You At’ before leading into a teaser track from the album. This band have a somewhat modest stage, but their juicy tracks make up for it. If their singles are anything to go by, their debut will sky-rocket them to success.

The undefinable Rolo Tomassi are next to unleash their harsh and unrelenting rock music to the punters at the Giant Squid. Arguably the heaviest band on the line up, they provoke a journey of opinions that vary rapidly during the performance. The pretentious, doom and gloom opening fails to conjure up an atmosphere, and instead leaves a big question mark as to how big Rolo Tomassi think they are. When the band finally appear on stage, the complex and experimental noise that begins their performance shows their dedication to creating new and exciting rock. Lead vocalist, Eva Spence, holds the performance together with her seductive movement and screeching vocals as the rest of the band bumble about on stage. After a few songs, the enjoyment wears off and the band look miserable, tired and like they don’t want to be here – not what you expect from Rolo Tomassi.

Alt rockers, We Are The Ocean, are another band that have been dipping back into smaller venues ahead of the release of their next album, and it has most certainly been a good move by management. Treating the audience to a mix of their most recent releases and their staple tracks, the band show how much they’ve progressed over the years and how their shows have progressed alongside them. We Are The Ocean are a band that stick to their roots and will continue to produce challenging, and catchy records that lead to intoxicating live shows.

Seemingly undeserved, Lower Than Atlantis begin their Giant Squid headlining slot. Unlike We Are The Ocean, Lower Than Atlantis have given in to every popular phase going. Starting out as a hard-core punk band, then delving into a brief life of alt-rockers to end up as every other pop-punk offering, LTA have had quite a journey. It’s a shame their journey has concluded with their once brilliant live performances, turning into a shambles. Mike Duce’s vocals have got worse and their set lacks the conviction that made them so infectious live in the past. What once would have been the set of the weekend, became LTA destroying their reputation as a live band in less than sixty minutes.

Regardless of the occasional underwhelming bands; the atmosphere, the bars and the people make up for it. Spending hours in the Saloon Bar and paying for beers with 20 pence pieces shows just how much of a good weekend it’s been. The line-up for growing artists has been solid, the fresh talent on the agenda have all proved themselves and the overall feel of the festival is one you won’t find at any other. The much loved Y Not Festival have really pulled it out of the bag for their tenth birthday and have made it a weekend to remember for a very long time… but maybe not quite one to tell the grandkids. We for one, are excited for what the curators will come up with for the line-up next year.