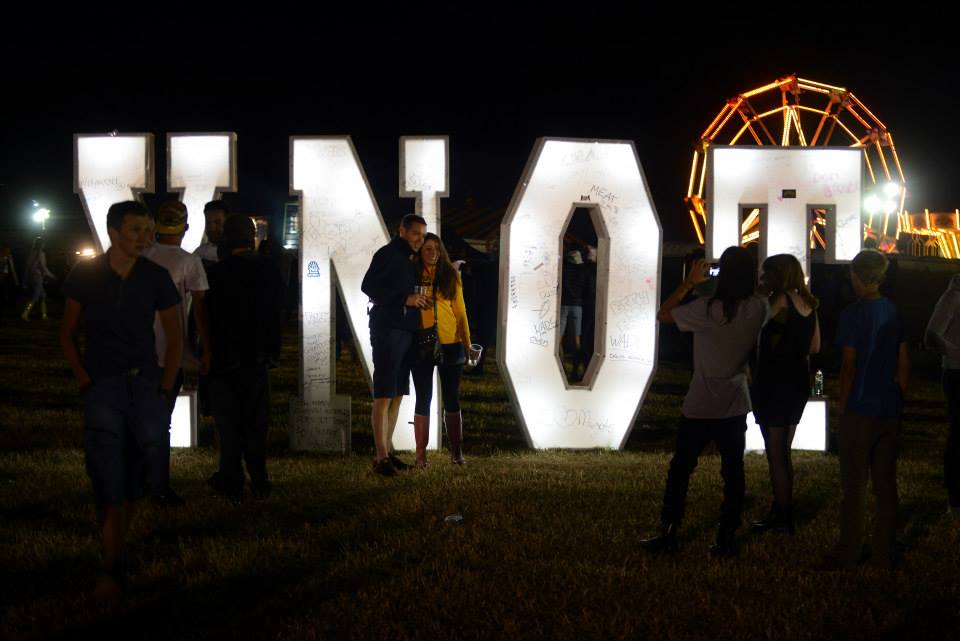 Stumbling out of the tent in the morning, still drunk and hearing Mr Motivator on the main stage doing his wake-up call is probably one of the more surreal things to wake up to – but at Y Not festival, anything goes. To refresh and recharge for the day ahead, a Hooch is in order before setting off to watch the tropical Aztecs. Considering the Hawaiian shirts, sunglasses and shorts, it’s clear Aztecs were hoping for better weather. With their indie charm and exotic sound, they would certainly be much more striking with the sun beating down; but their fruitful guitars and sugar-coated vocals make for a sweet Saturday morning treat.

In true Y Not fashion, the heavens decide to open. As any sane person would, all festival goers make a dash to the Giant Squid where there is shelter and live music. Obviously, the universe has its intentions for the rain as the band at the Giant Squid, Alright The Captain, are astonishing. They weave guitars, drums and bass together in a way that is thoughtful and consuming live. The complexity of the songs force the audience to stay rooted and mesmerised by the trio until the songs’ ending causes a moment of stunned silence before rapturous applause. For once, there’s a silent gratitude for the rain.

As the rain begins to ease, more Hoochs are in order before our favourites, Allusondrugs tear apart the Giant Squid. The alt-rock five-piece from Leeds are a saviour for anyone on the lookout for something that isn’t drowned in synths or pop-punk. Allusondrugs make have heavy riffs with melodies that get stuck in your head for days, and their live performances speak for themselves. Y Not marks no change from their usual mind-melting performances, as the lead vocalist does his usual possessed movements on stage whilst the rest of the band fling their heads back and forth to their ferocious riffs. Enticing the audience the only way the Yorkshire lads know how, the gig ends with an almighty moshpit and the lingering sense that Allusondrugs are forever moving towards big and better things.

Playing main stage at Reading and Leeds and headlining 2000 Trees over a month ago, this slot is a walk in the park for Deaf Havana and they know it. With James Veck-Gilodi (main vox and guitar) sounding drunk, and his brother Matthew Veck-Gilodi (rhythm guitar and backing vox) bouncing around like a lunatic, appearing as if he’s listening to a completely different song, it seems they’ve just taken the money and left. Luckily, their well-known tracks and summer breeze make up for their inadequate performance.

Continuing the light-hearted, indie-rock streak, Pale Waves were next on our hit list. The four-piece hailing from Manchester are a young band still finding their feet, but the path they’re on at the minute is one that can lead to a pot of gold. Their nineties influenced hooks, honest vocals and vulnerable stage presence makes Pale Waves a loveable band to be on the lookout for.

Saint Raymond is the project of singer songwriter, Callum Burrows. Although, singer-songwriter isn’t really the apt way to describe the intoxicating sound of Saint Raymond. I first stumbled across the project on Youtube over three years ago when he was part of the ‘I-own-a-guitar-and-can-sing-therefore-I-must-make-a-Youtube-account-because-Lewis-Watson-did-and-he-was-successful’ clan. Since then, I’ve watched him grow from playing the BBC Introducing Stage at Reading & Leeds Festival in 2013, the Festival Republic stage in 2014 and now, playing the main stage of his home-town festival in 2015. Bearing this journey in mind and the typical now-he’s-popular-I-can’t-like-him charade, it is truly humbling to watch an artist go from a few hits on Youtube, to play to such massive crowds. His voice never falters, the band never miss a beat and the audience never stop smiling. In the modern age, Saint Raymond is a true artist that will continue to flourish.

For a band so young and so fresh, TRASH play as if they’ve been on the circuit for years. Thrilling the audience with their dreamy pop melodies and intoxicating breakdowns, TRASH get the crowd riled up like no other band with their sound would. Despite the calm and tranquil noise emitting from the Chesterfield four-piece, a pit opens up that lasts the entirety of the set, proving that they’re onto something big. Already acting like pros on stage and their records being as addictive as they are, we predict TRASH have got an exciting future ahead of them.

Had there not been an overload of indie music, Hacktivist might not have been the next band to see at Y Not, but with a thirst for rock music, it was time for a trip back to the Giant Squid. Hacktivist consist of two vocalists, some electronics, guitars and drums that, together, brings a dirty, grime-y and heavy sound that is certainly a festival pleaser. At Y Not, everyone in sight is bouncing, throwing some shapes or admiring those doing all of the above. Regardless of the obvious criticisms of Hacktivist’s ridiculous and ludicrous sound, this band are fucking great live. And that’s what music is all about. Being a great live band that makes you lose all inhibitions. If Hacktivist are on a line-up at a festival and you’re looking to go crazy – do something nice for yourself and get down there.

Still feeling pumped after Hacktivist, the crowd get ready for headliners, Don Broco. Don Broco are one of those bands that have just done everything right; they’ve built their name, their fan-base, and their music gradually over the years without losing sight of where they came from. Ahead of the release of their second album, they’ve put their feet back into the small festivals and smaller venues to remind the fans, and themselves, exactly what they’re capable of. It’s a good indication to how Don Broco’s next album will fair when each track, whether old or new, receives the same frenzied reaction from a huge crowd. Their alt-rock sound encourages moshpits and crowd-surfers, while their pop-filled choruses urge sing-alongs and people on shoulders. It’s difficult not to enjoy Don Broco’s set when they create such chaos and still manage to sound so tight. From the aggressive ‘Thug Workout’ to the slick and sexy ‘Automatic’, Broco sound flawless. Finishing with the almighty ‘You Wanna Know’, the crowd belt out the chorus as if it’s the last thing they’ll ever do. And they’re right. This is the last time Broco will be at a festival as small as Y Not and boy are we glad we caught them.

Drenched in sweat and beer, we leave the stage for a short breather, steal some headphones and get ready for a dance at the silent disco. Initially, the intention was to stay for two songs, but the bangers keep coming and coming. Two songs turn into two hours and a then quick walk to the campsite to find lost friends. Once found, another twenty minutes is wasted at the other tents still going, in hope of finding something to dance to. Apart from ‘Uptown Funk’ making an appearance at the Saloon Bar, all hope of finding a good stage is lost, so we hit the hay and prepare for the final day of Y Not festival.