2Q Festival is packing a punch with over 100 bands playing across 10 venues in one day. Rob took the quick hop over on the Red Arrow bus to check out this new festival for himself. 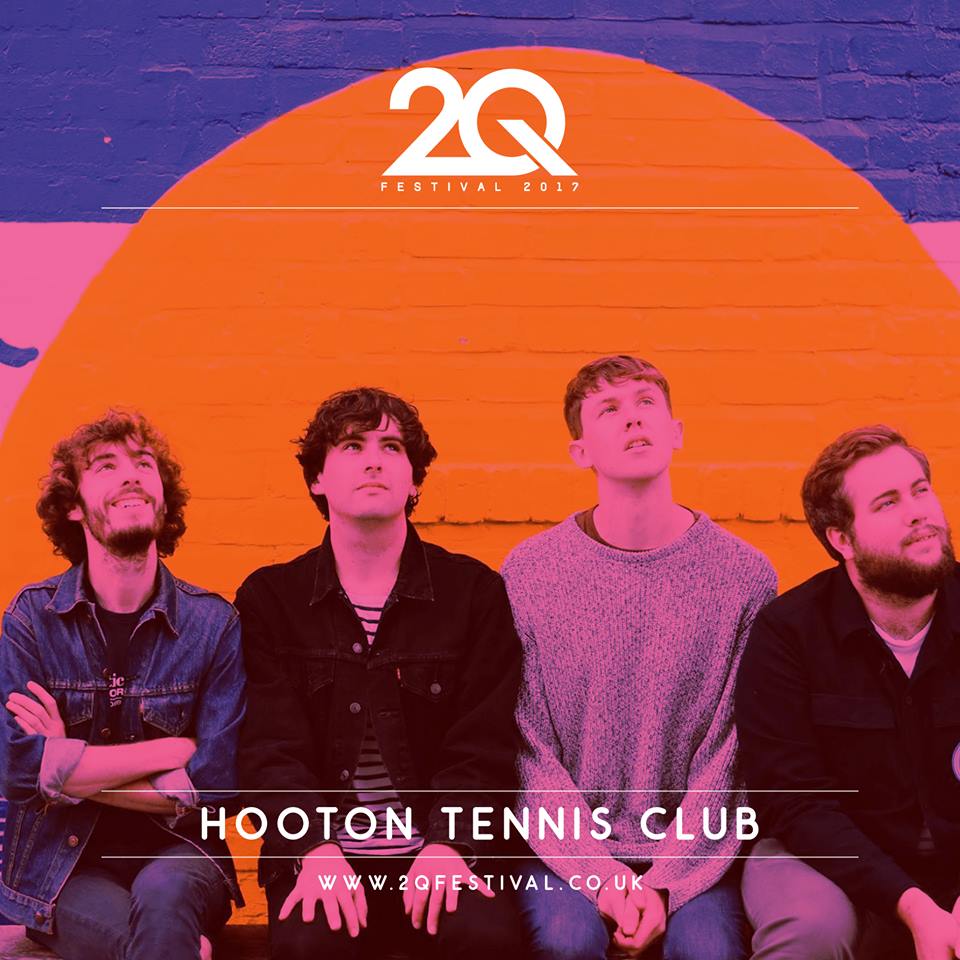 2Q Festival is packing a punch with over 100 bands playing across 10 venues in one day. Rob took the quick hop over on the Red Arrow bus to check out this new festival for himself.

Having missed the afternoon slots due to a very late night the night before we arrive in Derby, grab our passes and head straight out. All the venues are a stones throw away from each other in the heart of the city centre making it really easy to get about. First stop is at Bar One, hosted by BBC Introducing who are broadcasting live from the venue across the region. The East Midlands are really producing some fine bands endorsed by the fact that the venue is one in, one out and it’s not even 6.30pm. After a short wait we get inside and then straight outside to the courtyard where the bands are playing under a huge gazebo. Derby based Cold Water Souls are the first band we see and they don’t disappoint with their shoegaze tinged lad pop. The supportive home crowd are in good spirits and their 30-minute set is non-stop euphoric reverb drenched guitars. And in their frontman they’ve got a fine balance between a pop and rock singer. They’ve got plenty of potential to do something really good with their sound.

The next stop is the Hairy Dog to see Jaws but as with any festival, timings can go out of the window pretty quickly so after waiting and listening to 20 minutes of hardcore rock blasting out of the PA, we only get to see one song from the b-towners (and it sounds great). They’ve moved on so much from their early sounds and with a much heavier and evolved sound on second album Simplicity. It’s with a slightly heavy heart that we have to leave but we have a good reason...

That reason is Hooton Tennis Club. If you haven’t heard the four-piece from the Wirral then stop what you’re doing and take a listen. Having released one of the finest and most underrated albums of 2016, Big Box of Chocolates, the juiced up jangly indie band are playing at Derby’s centre piece, The Guildhall Theatre. When we arrive we are literally ushered into the venue by ladies with torches and red suits, it’s slightly bizarre but not as bizarre as the venue itself - it’s seated. We should have realised what with it being a theatre and all.

We're having none of it, and quickly rock up to the front, heckling those in the seats, soon joined by the rest of the Tennis Club fans. Any formalities are gone as soon as Hooton kick off. Beers are thrown everywhere, lads embrace each other and the band fly through songs from both albums. When you have absolute belters like 'Boot Cut Jimmy', the immortal 'Jasper' and finish on 'POWERFULPIERRE', it's no surprise that Hooton prove to be the highlight of the day. A band you have to smile at and dance to, a pretty special band indeed.

Our biggest regret of the day is not catching The Big Moon. We’d heard that due to capacity issues people were being turned away from the main venues so logistics prevailed, we didn’t catch them, and we really wish we had. With their debut out this week, they'll be touring around the UK over the next months, so don’t be as stupid as us and miss them.

Just when you think you’ve been to all the bizarre venues, we end up in a silk museum to finish the day. We catch the last couple of songs from TOY, who are doing their same old tired krautrock. Not even a new shade of blonde could make this band any more interesting. We wait an absolute age for headliners Temples to arrive. We read every information board in the venue in the time it took them to get on. We are now silk experts.

Walking onto a chorus of boos, isn't the best start, and what’s more frustrating is that the venue appears to be half full. A lot of people were left outside, with some even trying to rush the doors to get in. Despite the delay, the Kettering band soon get into it, playing a number of songs from newly released second album, Volcano, which are slightly hampered by the fact they’re playing in a Silk Mill - the sound is not the best. But there are a number of highlights, including 'How Would You Like to Go?', 'Colours to Life' and new single, 'Certainty'. Whether it was the delay or poor sound in the venue, Temples don’t seem too up for it tonight, but it could also be that after a day of running around the city of Derby, going from venue to venue watching bands, we might just be being fussy.

Overall 2Q Festival has quite a lot to offer. The venues are good, (some need more work than others) and the promoters have a good ear for new bands. 2Q has every chance of becoming as good a festival as neighbouring Dot to Dot in Nottingham or Tramlines in Sheffield. We only got to see a tiny part of it, but we'll be back next year and recommend you go along too. If anything, just to find out where silk comes from.