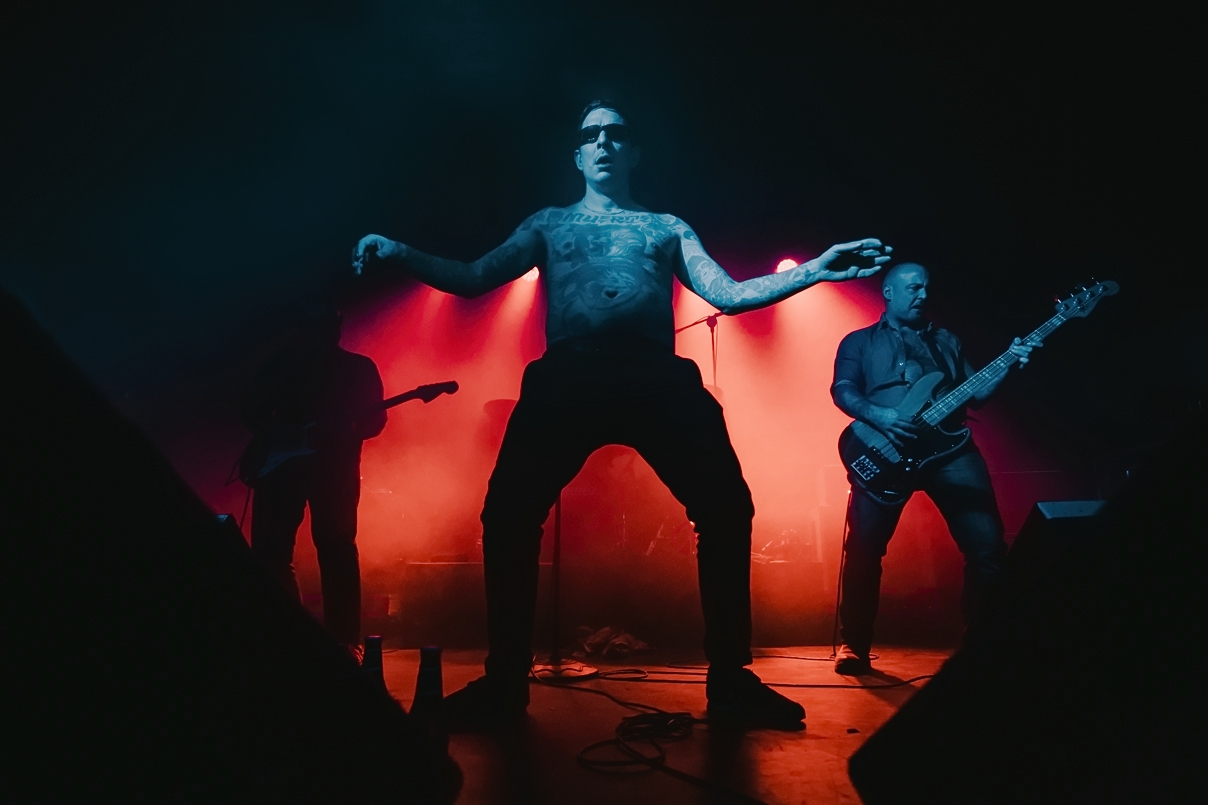 2021 has been a strange year, that’s for sure. Last week already seems like a different age, full of carefree optimism. No looming threat of lockdown, just gigs and beers. Or at least that’s how I fondly remember it from the ever growing re-dystopian landscape we are staring back into. Anyway, enough rambling.

This has been a big year for Viagra Boys, for better and worse. Their show at the Electric Ballroom turns out to be closer to the end of the year than expected, with the final dates of the tour called off as one of the touring party unsurprisingly succumbed to the plague.

9:15pm rolls around and the band take to the stage. I see myself in Sebastian Murphy, a pale, paunched, shirtless, tattooed animal. His sunglasses do little to hide the signs of heavy living as he moves across the stage, flexing between heavy hip work and some kind of kung fu ballet.

‘Research Chemicals’ smacks the audience in the face with jarring synths and driving bass. The crowd are on great form, it’s seconds before my fresh £5.80 pint is all over my shirt. Happy days. The first of the set’s many extended break downs comes midway through. The bass drives forward, whilst space is given to the sax and synth to make as many chaotic and disturbing sounds as possible. Murphy uses this time for an inaudible rant about the joys of combining spice with acetone and rolling tobacco.

‘Ain’t Nice’ has to be one of the anthems of 2021. Introspective storytelling at its simplest. A chance for the audience to fly into each other at full pace. The sound at the Ballroom is fantastic, simultaneously clear and chaotic.

‘Slow learner’ is dedicated to their co-founder/guitarist Benjamin “Benis” Vallé, who tragically died in October this year. A tender moment as Murphy is handed a sign from the crowd, reading ‘That you Benis’.

“I want to dedicate this song to our late guitarist. Benis, rest in peace, rest in power.”

Oskar Carls gets to flex on ‘Just Like You’ as we take things down a bit. The saxophone whining above the band like a lonely dog. He and keyboardist Elias Jungqvist perfectly juxtapose the totally relentless bass of Henrik Höckert and drums of Tor Sjödén. [Checks spelling four times].

One thing is abundantly clear from their set. It’s chock full of absolute fucking bangers. There’s zero dead weight here, no fillers in sight. ‘Down in the Basement’, ‘I Feel Alive’, ‘Secret Canine Agent’, ‘Toad’, ‘Worms. Each song as diverse and iconic as the previous one.

“I never thought I was going to end up sitting here in London, fat as fuck, singing into a microphone about worms man”, admits Murphy. A statement which echoes truer today than it ever has before, certainly. “I love you guys, thank you. You’ve warmed a frozen heart.”

The sound of John McEnroe screaming into the crowd signals the arrival of ‘Sports’ and again the crowd go mad. By this point Jungqvist and Carls are flanking the stage, twenty feet up on the monitors, the former having moved to keytar to accommodate his new position. The band finish with an extended version of ‘Shrimp Shack’. One last chance for some soaring sax and synth madness before we all go home to bed.

Viagra Boys will return to the UK (hopefully!) in May. If you didn’t make any of their shows this time round, I’d make sure not to miss them next time!