Primavera 2022, somewhat of a bumper year. A double rollover. Plus the return to the midweek city-based shows, means things are bigger and better than ever. 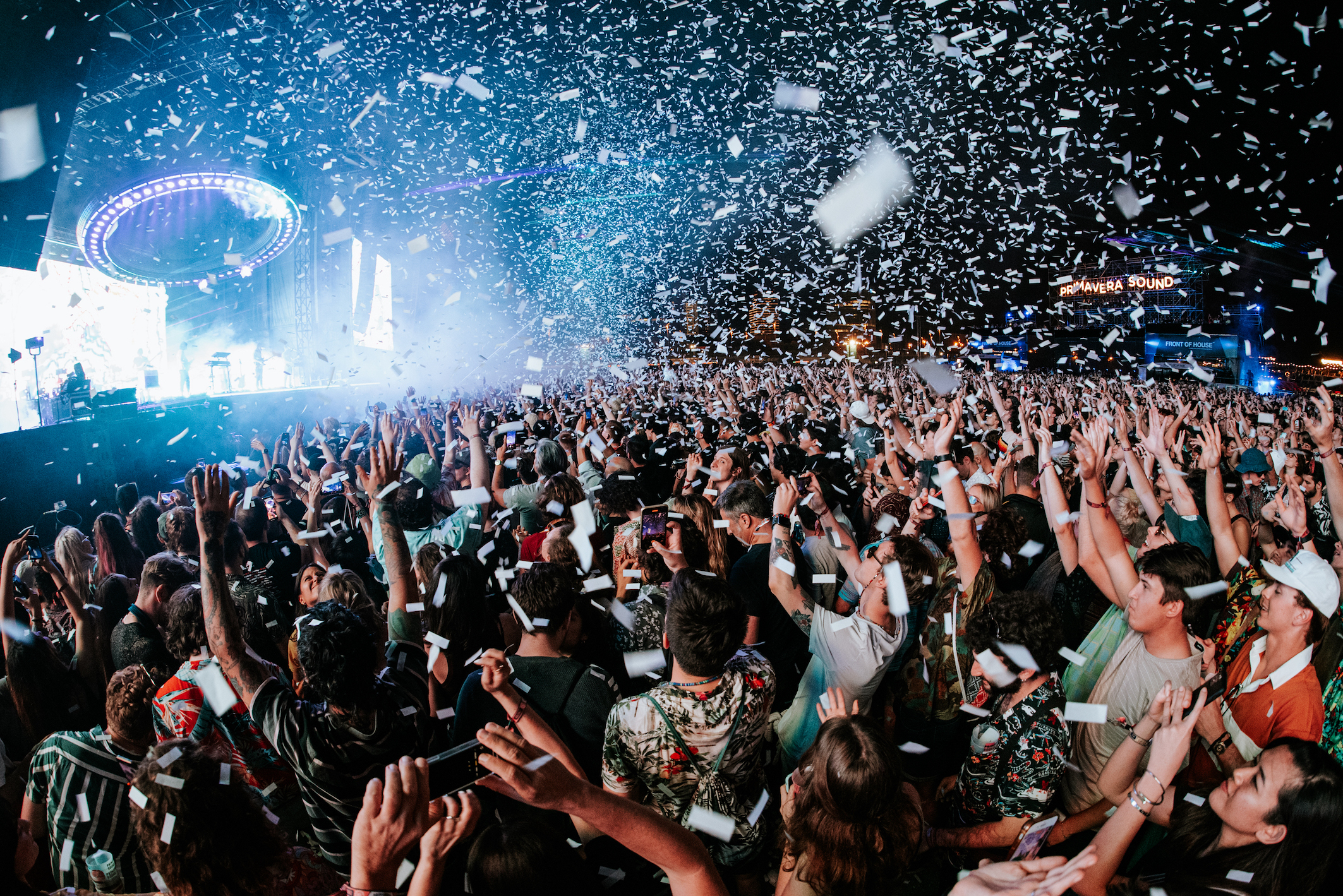 Primavera 2022, somewhat of a bumper year. A double rollover. Plus the return to the midweek city-based shows, means things are bigger and better than ever.

Arm twisted, hair pulled, we decided the decent thing would be to hop on a plane to Barcelona and see what all the fuss is about.

The first weekend kicks off on Thursday. The sun is shining and everyone is excited. The festival is located in the dockland area of the city, a concrete utopia. Let’s get the elephant in the room out of the way before we begin. The opening night is a bit of a shocker. Perhaps it’s the absence of the festival for a couple of years, but there’s some teething issues to get over. It seems things are oversold, crowds getting a bit too cosy for comfort, it takes a touch over an hour to get beer or water and the transport to and from is slightly sparse. Ok? That’s over and done with.

We make it to the main stage just in time to catch Tame Impala. We’re excited about this one. Alas there’s a sense of unease around the place. Streams of people coming and going and pushing the crowd back and forth. Things settle into the second half and we are finally able to get into Kevin and chums. It’s not quite ideal for such a hypnotic and feel good outfit, but that’s not to their detriment. The final songs are a delight as the light show and confetti bring the crowd together. The festival has begun.

We head over to Ouigo to catch Black Lips. It’s been a while and the seem to have moved into running line dancing events, but the set is still pointed with all the classics. It’s impossible not to jump around to ‘Bad Kids’ and ‘Oh Katrina’, even if the band have grown out of some of the mania they once had.

It’s certainly worth being over this way, as next to come is Otoboke Beaver. They’re fucking amazing. It’s chaos from start to finish. Exhausting just to watch. Their songs leap around constantly, never giving the audience a chance to rest. Not that anyone would want to. Not just yet.

Friday comes around and we’re a new breed of punter. Savvy and street smart. We stuff our underwear full of red wine and sangria, have a small discussion about the thoroughness of the security and then head in. Alas, we manage to go through 3 levels of security and find ourselves once again outside the festival (drinks intact, mind). We pause to watch (listen to) Beck from a small motorway just outside, joining many of the locals who are enjoying the festivities from outside the confines of the establishment. He sounds pretty sound, it has to be said.

Back inside and it’s time to head over to King Gizzard. We take a seat across the bay and pour a glass of wine. All very civilised indeed. They deliver in spades. What a band. Taking a step away from their heavier, doomier stuff and playing a set fit for the Spanish sunset. Certainly one of the highlights.

Saturday is the final night of the first weekend. We head in to watch Slowthai. Probably the less said the better. The main event of this evening, and maybe the whole weekend, is Gorillaz. It’s a rare beast that can step up to such a large festival and make themselves known, and they are certainly one of those rarities.

The orchestral nature of their lineup these days certainly helps, as does the awe inspiring backdrop of Jamie Hewitt’s work, but really what does it is the set of absolute bangers. Tears are shed, sweat is sweat, voices are lost. We are treated to Mos Def popping in for ‘Stylo’ and De La Soul swinging by for ‘Feel Good Inc’ and covering for ‘Clint Eastwood’. Amazing stuff. Slowthai popped in, but again the less said about that the better.

As this is Primavera’s 20th year (discounting its two-year postponement in 2020 and 2021), us lucky lot get two weekends’ worth of festivities - should we have the stamina. Only the tenacious and the brave (or stupid?) will survive, soldiering on for round two. Here we are again. Pockets stuffed full of loo-roll, paracetamol and miniature bottles of red wine, in we go.

It has been a tiring week so far, testing the limits of the human body through the likes of sun-exposure, sleep-deprivation, Estrella-induced hangovers and flimsy blister-plasters. Bodies and minds pushed to breaking point in every way imaginable, yet we’re still seeming to have a rather lovely time.

Before we know it, it’s Thursday again, and I’m tired. I feel a distinct pang of regret for going out every night for A La Cuitat in the four-day period between now and weekend one. Fear begins to mount as we make our way back into the festival. However, this soon melts away as we find ourselves surrounded by fresh faced, glitter-clad, crop-top donning club kids in their mid-twenties, clearly fresh off the plane. Of course. This is the weekend of Dua Lipa, Charli XCX and Jessie Ware. We get swept away in a sea of mesh vests and neon eyeshadow and leave our worries at the door. Things are going to be okay.

We begin at the main stage, Estrella Damm, for Khruangbin. The Austin trio have attracted quite the crowd, a wave of calm ebbing in the low sun. Their set isn’t too unexpected - a little stagnant even - but it picks up in the final few songs. After that it’s Interpol. Thankfully we can conserve our energy to keep things regulated for the long night ahead. The sun begins to retreat back behind the stage.

Gorillaz were such a standout in Weekend one that we have to catch the last half of their performance again. Damon Albarn is once again clad head-to-toe in pink, but this time looks slightly more inebriated. Either that, or we are - it’s difficult to say - but no need to dwell on the matter. The band delivers, and everyone appears to be having an absolutely marvellous time.

We stick around at Pull&Bear for a bit of Dua Lipa. Dua goes through the motions, integrating the old ‘which side of the crowd can cheer louder’ gag into her carefully planned out choreography. We make our exit early, heading on the lengthy pilgrimage to Tous stage on the other end of the festival for Charli XCX, so as to not get crushed in a stampede of chainmail vests. Shockingly poor choice of placement and timing for these two acts, it must be said.

What Dua lacks in energy, Charli more than makes up for, flailing around the stage like a tiny rocket. We dance for what feels like 10 minutes, but we check the time and see that it’s now 3am. We end the night with a helping of Mall Grab and finally Bad Boy Chiller Crew - at which point we are mystically transported, as if by some higher power, to Sunderland, drinking warm Strongbow on the back of a bus on my way to break into the local park for a night out. Quite a way to end the evening.

We sleep well into the late afternoon then head inside again for Friday’s lot. The Strokes are on the main stage, who had canceled their set in Weekend One due to Covid. Julian explains that he does, in fact, still have Covid. He coughs into the mic. The crowd doesn’t know how to react, but we all soon forget when they start to play all of our absolute favourites from Is This It. Those of us who have waited since Weekend One really feel the gravity of this experience. The sky is still slightly light. We are happy. Everyone is happy.

We have positioned ourselves strategically on the Pull&Bear side for The Strokes, so that when they finish, we can immediately descend towards the front for M.I.A. We don’t do half bad, either. For the first time, we can actually make out an act’s facial features without referring to the big screen. The performance is an absolute stand-out. It’s pure euphoria from start to finish, and despite jumping around for over an hour, we ride an adrenaline high to see us through the rest of the evening.

This is a perfect way to send us on our merry way to Grimes’ DJ set, all the way back over at Tous stage. With a press pass we have access to the bridge, which cuts the walk down from 20 minutes to about 5. Unlucky for everyone else, though, as apparently access to this side of the festival is blocked due to overcapacity, causing hundreds of fans to miss her set. While her personal life remains mystifying at best, it can’t be denied that her performance is thoroughly enjoyable, albeit not incredibly smooth (the sudden transition into Mariah Carey’s All I Want For Christmas Is You springs to mind as a particularly jarring moment).

After 9 days on the trot, we reach our last day of Primavera. Mustering the final ounces of energy we have left, we stroll over to Pull&Bear one last time to see Yeah Yeah Yeahs. Karen O’s charm and excitability is infectious. Giddily, she tells the crowd that this is her favourite festival, that she’s happy to be back. We bob around, enjoying songs we haven’t heard in over a decade, unlocking memories we didn’t know we had.

Jessie Ware is the highlight of the evening, with the crowd at the palm of her hand for her performance of her album What’s Your Pleasure. We only know the words to a few of the songs, so we dip in and out of the mass sing-along. It becomes clear very quickly that our lyrical knowledge of Jessie Ware, which we would have originally thought to be somewhat competent, is in fact very poor indeed when compared to everyone else around us.

As the festival begins nearing its close, Megan Thee Stallion comes on stage, and there’s not much to say, because we still haven’t quite figured out what it is we feel during this experience. It’s somewhere between confusion, thorough entertainment and a deep shame about our own sex appeal (or lack thereof). The strange feeling of inadequacy and bewilderment dissipates soon after, as if a dream.

So there we have it. Primavera 2022 certainly was the bumper year everyone was hoping for. Sure, there were a few wrinkles to iron out, but it seems like an eternity since the pre-dark ages and everyone has some adjusting to do. One thing is for sure, for those with the energy, this festival pays off.