If there was ever a reason to leave behind the UK festivals and head to the sunny land of Spain for a few days; Bilbao BBK Live 2016 is the one. 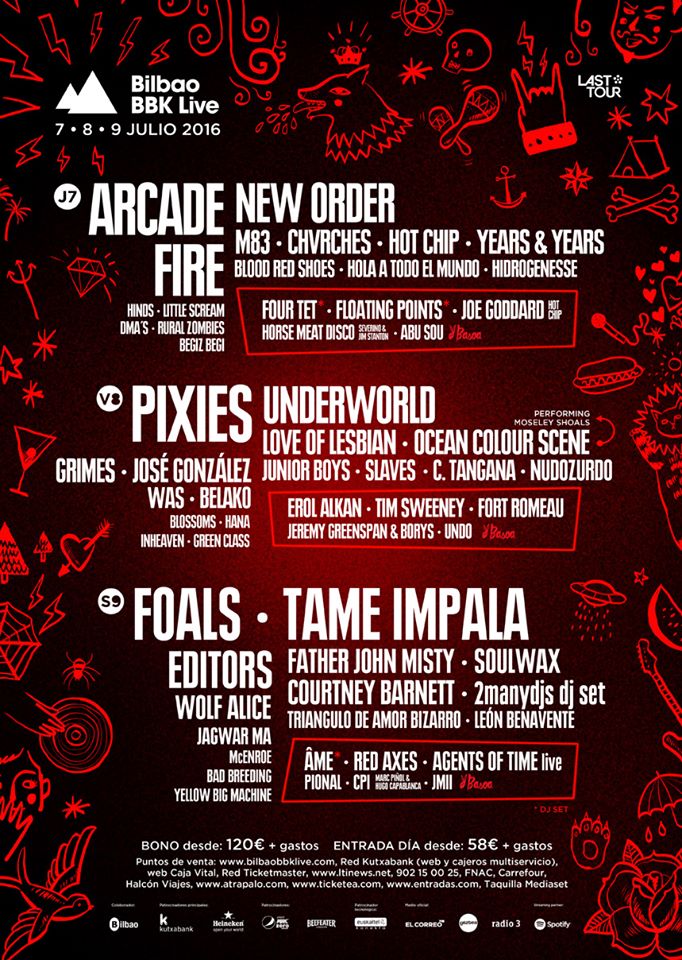 If there was ever a reason to leave behind the UK festivals and head to the sunny land of Spain for a few days; Bilbao BBK Live 2016 is the one.

It's no lie that year upon year, more and more weekends are being taken up by festivals. It's also no lie that a few festival line-ups this year are a bit shoddy; we've been feeling above average levels of disappointment, rather than excitement. The same cannot be said for Bilbao BBK.

Let's take a look at the head-liners; first up it's Arcade Fire. Arcade Fire have been on the circuit for many years, dipping their toes in different styles as they go, with their most recent record, Reflektor, pushing the proclaimed indie rock giants into a world of dance and electronics. With them, and the legendary eighties synth-rock-Joy-Division-evolution, New Order kicking off the festival, it's going to start with one hell of a big bang. Cranking up the electronics, Friday will see Underworld take over the stage. This will be one of the highlights of the weekend - I mean, hearing the absolute classic that is, 'Born Slippy', live as the sun goes down will be a mind-blowing moment, no doubt.

As quickly as the electro appears, it fades away, as none other than the Pixies, play their headline slot. There's not much to be said about Pixies apart from the fact that it's the Pixies. You know they're going to be ridiculous live. If that trio wasn't enough, the band of the Summer and several summers prior, Tame Impala are helping close the festival on the Saturday before Foals take their worthy place as head-liners. It's going to be interesting to see how Foals compare with the other head-liners who have been playing these huge slots for years - but we're pretty sure they'll smash it.

I'll give you a second to pick your jaw up off the floor after reading that phenomenal list of head-liners at Bilbao BBK 2016, but not for long. The rest of the acts are equally exciting for completely different reasons. From Courtney Barnett, to Slaves, even to Years and Years - this line-up just does not stop slaying it.

Whether it's up and coming rock bands, or rising electronic acts, the eclectic array of acts is astonishing. And despite there being so many different genres all at the same festival, nothing seems out of place. The artists might not all technically come from the same genre, background, or even planet, but they all have one major thing in common - quality. Every act is on this festival because they are the best at what they do. Every single one of them is putting out some of the very best music that has been released in the past five years. Take Father John Misty; last year he put a record well-respected both by fans and critics. Then there's CHVRCHES, out of nowhere the the Glaswegian trio just started dominating the mainstream media and every year since have been seen higher and higher up the bill. Both of these acts are at the top of their game. They're the acts us festival-goers deserve, and they deserve to be on this poster.

If that wasn't enough, Bilbao BBK's curators are adding a new live music experience this year... say hello to Basoa space. To you and me, it's essentially a rave in the woods. There will be a host of national and international DJ's (Four Tet, Erol Alkan, Horse Meat Disco, the list continues) all spinning electronic and experimental tracks in a forest in the middle of the festival. Their main aim of this new addition is to, "Join nature and good music in an intimate atmosphere... a party in the middle of pure nature and with each and every one of it's elements." Doesn't that just send chills down your spine?

It's safe to say, we at Raw Meat are well and truly ecstatic about going to this festival. This is one of, if not the most powerful line-up of the Summer. And it's in Spain! Sorry Primavera, but we're all about Bilbao BBK Live.