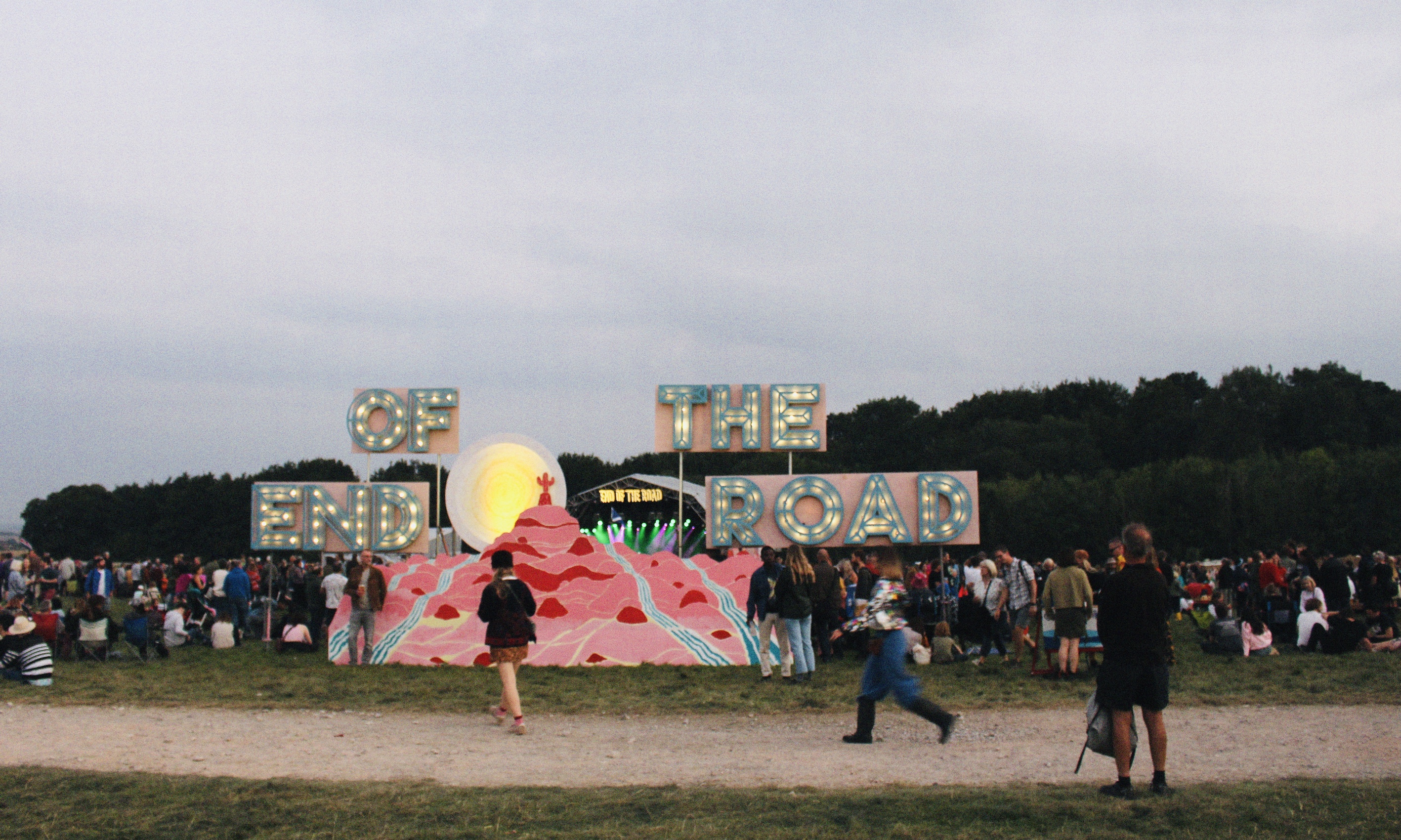 The day began in a typical fashion, sitting at the train station watching a series of services flash up as cancelled on the board, each blinking message adding another layer of stress to proceedings. Finally we catch a train and then it’s into the car for the three hour drive to End of the Road. With each hour that passes the stress dissipates. The last stretch takes us through the New Forest with it’s Ghibli-esque shrubbery and confident donkeys. As we reach the festival it’s greenery as far as the eye can see. A beautiful and serene location for what would turn out to be an equally beautiful and serene weekend.

As with most festivals this year, the line-up is practically all home grown or UK based acts. It’s a truly diverse lineup, catering to most tastes or needs. The lack of overseas bands gives room for the best of the Isles to really shine and it’s jam packed with talent. Here’re some of our picks from the weekend.

Damon Albarn took to the stage for a modest set for such a modern behemoth. My first time seeing him in a solo capacity. His set was understated and full of modern nostalgia. A lovely mix of material from his upcoming album The Nearer the Fountain, More Pure the Stream Flows, alongside some paired down classics. The crowd were calm, but engaged, with peaks of emotion during ‘On Melancholy Hill’, which always brings a tear to my eye and for ‘This is a Low’. We were even treated to some The Good, The Bad and The Queen, the carnival whirling ‘Three Changes’ getting the crowd moving. ‘Go Back’ was in there too, completing a fitting tribute to the late great Tony Allen.

Trash Kit are a band I was unaware of before the weekend and my biggest take home from the festival. The stoic three-piece are joined by a lively choir, bringing a lovely juxtaposition to the still band. Soaring vocals and looping swirling guitar, almost bringing more rhythm than the drums, which are given room to be sporadic, whilst the guitar keeps things tight. Everyone on stage and in the crowd was absolutely buzzing to be there. Vocalist Rachel Aggs closes the show with some words of encouragement for those in the crown thinking of starting their own project. "If anybody is thinking of getting into a band. Do it. This band has been going for a fucking long time. And we are really grateful. It doesn’t often happen that brown people, queers and women get to do it."

Warmduscher are the band I was most excited to see. I caught them mid-pandemic for a socially distanced, sit down show. As great as that show was, it didn’t quite do justice to such a lively act. Two songs in and the tent is full of the familiar agricultural smell of a punk show. It’s been a while and I didn’t realise how much I missed it until it hit my nostrils. The show is a haze of flashing lights, converging bodies and getting kicked in the face by those who have taken to the skies. Nuha Ruby Ra and Wu-Lu joining the band onstage to add to the madness. One of the best live acts around right now for sure.

Pozi opened the main stage on Saturday. When we arrived we were unsure if people were sitting for a picnic or to listen to music, but as soon as they started there was a rush straight to the front and an instant crowd. Melancholia is my favorite shit and Pozi are dripping in it. ‘Engaged’ is the song that’s been stuck in my head the whole week, it’s an absolute banger. Staccato violin, melancholic bass and vocals which sound like you’ve been sacked from your job, don’t give a shit anymore and are going to tell everyone about it. A super refreshing band.

Squid are a band going from strength to strength. Their debut album Bright Green Field has really taken things to the next level for the Brighton collective. The crowd is the tightest of the weekend. Super funky basslines, upbeat drums, twiddling guitars and maniacal vocals have the crowd totally on their side. An incredibly dynamic band taking us on a rollercoaster journey. Midway through the set takes a cheeky exit to drum and bass, taking me straight back to Fabric in 2008. A truly engaging set by a band who will no doubt be making their way up festival bills in the coming years.

Sleaford Mods are the headlining act of the festival for me. An incredibly reliable band, both on record and live. They’ve stuck to their formula and there’s zero signs of it getting old. For such a simple setup they always deliver live. What can go wrong if you plug in a backing track and shout over it. As long as Jason Williamson is angry then the show is going to hit hard, and much like Bruce Banner, he’s always angry. “We’re a bit angry, a bit negative, a bit jaded, a bit older – but there is hope, isn’t there, End Of The Road? Onwards!”

On sale for just minutes, the festival's early bird tickets for 2022 sold out in record time. General tickets are now on sale HERE. Recommended for music-loving families, those above 25, anyone who doesn’t enjoy queuing to buy beer, tree lovers. Basically anyone other than teenagers who want to take a load of mandy, not wash for a weekend and bang in front of an audience.

All words and images by the amazing Duncan Clark