It’s a cloudy afternoon in Reading, but Izzie Dyer’s chance to chat with up and coming local duo Air Circus brightens the day. 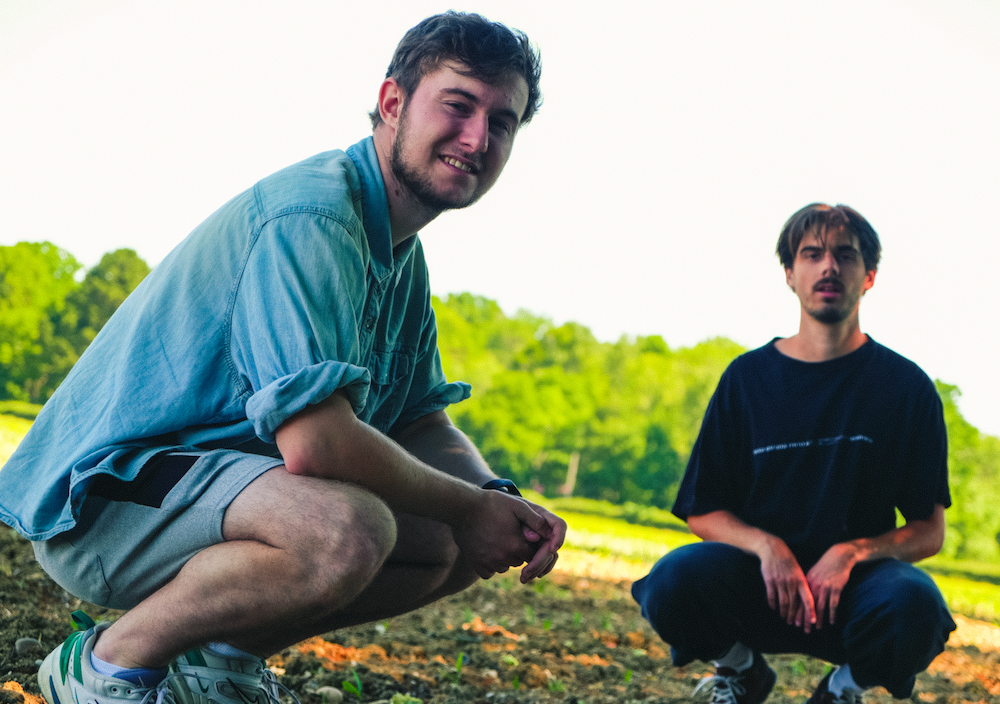 It’s a cloudy afternoon in Reading, but Izzie Dyer’s chance to chat with up and coming local duo Air Circus brightens the day.

Together, Adam Adrian and Dan Follant make up Air Circus – an innovative musical project creating wonderfully whacky tracks ranging from dream-pop to electro-synth. We’re in luck as the pair have kindly fitted a socially distanced meet up into their busy schedule – Dan has just come from a shift at Budgens, and in his Zoggs shorts we can only assume that Adam swam here.

RAW MEAT: So, Air Circus – you’re fresh, new and exciting. Tell us about how AirCircus came to be.
Dan (producer/pianist): It started in around March 2019. I wanted to collaborate with someone to put some music together for a Uni assignment that I had; Adam was the first person that came to mind. We knew each other from secondary school, but had barely ever spoken. I messaged him, and he came down from Reading to where I study in Bournemouth, and we spent three days recording together. That was when we came up with 'She Don’t Disco' and 'Another Guy'.
Adam (vocals/multi-instrumentalist): We also recorded a few Mac DeMarco covers – there was no one else in Dan’s halls at the time so we could just muck about recording in the kitchen.
D: You slept in the kitchen, too.
A: Oh yeah – it was a bedroom and a recording studio. And a place for eating sweetcorn.

Nice. What are you guys up to when you’re not Air Circus? How does making music fit around that?
D: The past two months have been very Air Circus focused, which has been great. Other than that I’m a student going into my final year of Uni, as well as writing my own music and working on a few other music projects. I do some freelance mixing too.
A: Pre-lockdown I was acting in a touring theatre of Spain, and prior to that I did some odd acting jobs in indie short films. I’m also really into photography – I worked as a photography apprentice in Budapest for a month last year, and have been getting back into it over lockdown by working with some independent local businesses in Reading.

Wow, you’re busy people! How have you coped with the challenges presented by lockdown in terms of getting together and making music?
D: We’ve managed pretty well seeing as we’ve already been working remotely since September 2019, what with me being at Uni and Adam travelling abroad. Before the two of us could get together at a distance in lockdown I was constantly sending edits to Adam and he was sending back notes.
A: Yes, we’ve been bouncing our ideas back and forth since I’ve been back in the UK. It was troubling not being able to get together and jam out in the kitchen like we used to. We tried a jam session over Facebook Messenger call… but it was so bad! The lag meant that nothing meshed.
D: As lockdown has eased, things have definitely become easier for us.
A: Oh yeah, completely. It has meant that all our new material has been recorded in the garden rather than in a studio. Bit of a shit storm if it ever started raining with all the leads and Dan’s keyboard.
D: Working outdoors has really pushed us to try out different things – adapting to new environments has improved our production.
A: We’ve had to look at our processes differently – the unconventional locations have definitely helped our creativity.

‍And you’ve released some stellar material over the past few months – we’re loving your latest single ‘Slow Down’.
D: Thanks! 'Slow Down' was actually written back in February – at the time I was really into 'Dawn Chorus' by Thom Yorke and wanted to write a song a bit like that with no timing, using tempo automation.

What else are the pair of you listening to at the moment?
D: I’ve been really into Kendrick Lamar’s To Pimp a Butterfly album.
A: A friend of mine introduced me to the band Allah-Las whilst we were in Spain – listening them inspired the more laid-back tempo of 'Coco Moon'. Oh, and I’m listening to Gábor Szabó – a Hungarian musician from the seventies.
D: Is there anything that we’ve both really loved?
A: Our songs sound nothing like what we actually listen to!
D: Pre-lockdown I was listening to a lot of Tame Impala, I think you can hear a bit of that in some of our tracks.
A: Actually, I absolutely love Her’s, they’ve been a huge inspiration to me. We take a little bit of inspiration from Gorillaz, too.
D: I’d say so. Some of our ideas are definitely inspired by them, if not so much the sound.

What kind of subjects do you take inspiration from when you’re writing?
D: About a year ago it was whatever came out of Adam’s mouth – we have a bit more direction now, though!
A: For 'Slow Down' the lyrics were influenced by 'Dawn Chorus' as well – what would you call taking inspiration from a song like that?
D: Stealing?
A: Anyway, our music is much more focused now than it was before.
D: Sometimes we still take a random idea and build a story around it in a sort of Paul McCartney way of writing. ‍

As you’re still on the lookout for a label, how do you guys find managing the production side of your music?
D: Before, we might return to songs quite a while after we’d recorded them to do the producing. However, now I tend to produce the tracks as we go along, especially seeing how out and about we are currently. It’s all one big fat learning curve – we’re always discovering and learning new ways of doing things, and I’m always willing to take on board new ideas and processes. It’s definitely not a bad thing to self-produce.
A: We’ve been doing a lot of collaborations lately, primarily with other local artists from Reading, and have found that that has helped us refine our production processes. It’s nice having multiple pairs of ears. Everyone brings something new to the table, whether that’s their instruments or production methods. It can also help us build on our songwriting, as different people interpret what we’ve written in their own way that we might not have considered before. It’s all about the fun of making music.

It’s great to hear that you’ve been able to work with other artists from the area. What are your thoughts on the Reading music scene in general?
A: I really like the music scene here. In terms of bands, I like Workin’ Man Noise Unit. Beyond that, there are some great open mic nights dotted around town, we’ve got some brilliant little venues like the Global Café and the Rising Sun, as well as a huge range of small festivals. The smaller festivals like Are You Listening?, Beat Connection and Readipop are great platforms for local artists and provide an alternative to the obvious answer of Reading Festival. They’ve got a lot of character and diversity between them. It’s hard to reciprocate that kind of atmosphere through a livestream, like lots of bands have been trying during lockdown.

And what’s coming up next from Air Circus?
D: Ooh, what do you think we can reveal?
A: I suppose we can tell you.
D: We’re making an album!
A: We’re very excited about it – we’ve been working on it around four or five times a week for the past few months. We’ve also got a few more singles due for release before the end of the year.
D: It all sounds promising, it’s better than anything we’ve released before.

Great stuff! A little birdie tells us the next of your forthcoming singles will be with us 4th September?
D: Yes, 'Here Again'. We actually wrote it around a year ago – Adam was just messing around making up random lyrics about his brother.
A: It’s both dark and mellow.
D: 'Here Again' has synth-pop written all over it.