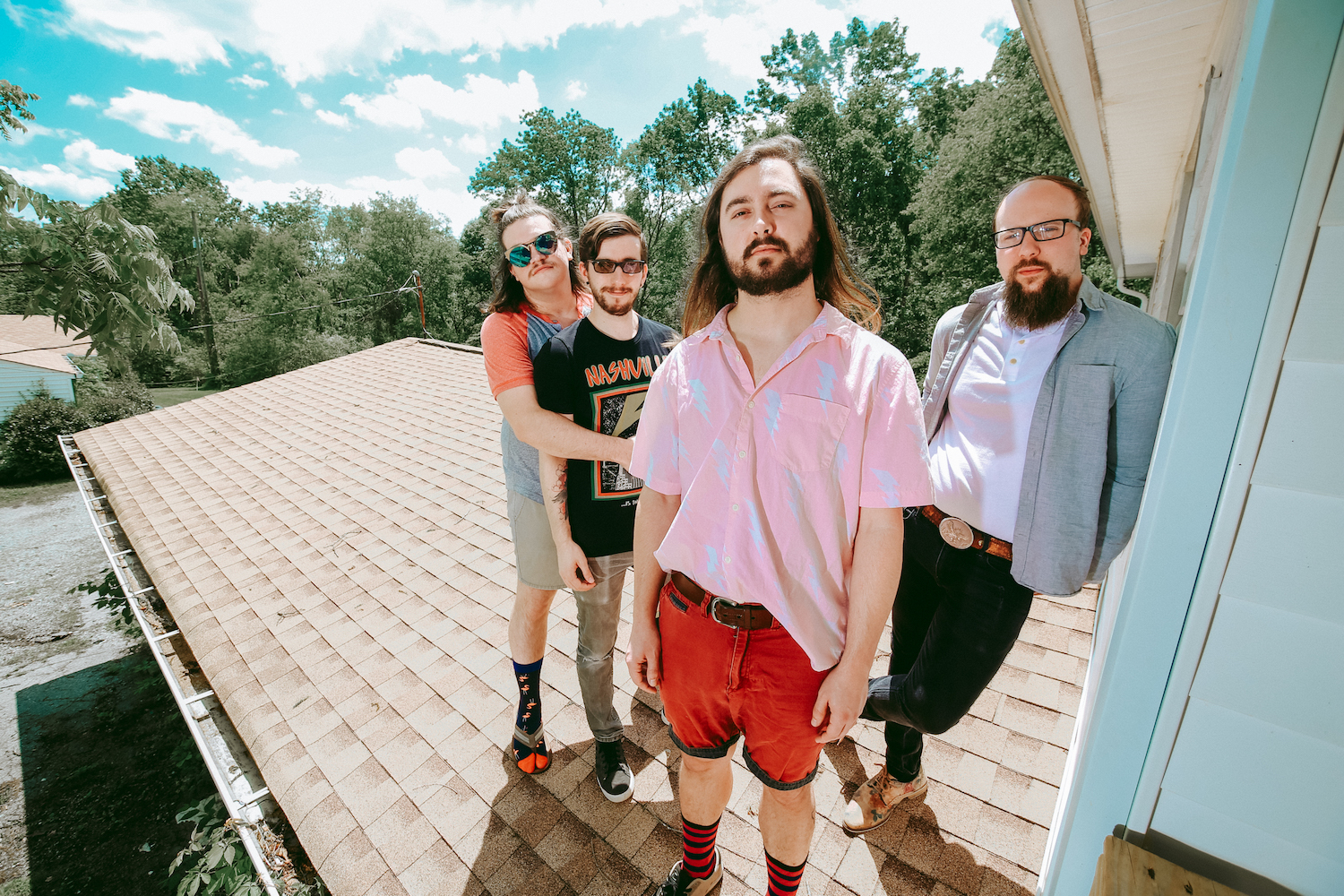 Even if just for a moment, Ghost Town Remedy's long-awaited album Dry Spell creates a safe space in the hell of 2020. Like an audio high five to the brain, listening to the band is like watching Bill & Ted. Maybe everything will be ok! Maybe god did give rock n roll to us! Their nostalgic riffs and nerdy-friendly subject matter create an earnest alternate universe. Nashville-based with a new album very nearly released, I spoke with TJ Maher (guitar/vocals) and Steve Lane (drums/vocals).

RAW MEAT: Let's talk about your locals; what’s your favourite local venue, are there any record labels or stores that we should look up, what’s the scene like where you're from?
TJ: Nashville has a super vibrant but often grossly oversaturated scene that's a lot more than just country. On any given night (pre-pandemic) you could get an invite to probably 20-30 different shows of vastly different styles. The competition is insane at times, and it’s really easy to feel like a small fish in the middle of the open ocean. Plus your average guy on the street can probably play guitar a lot better than you. To me, it’s really important to find like-minded local bands and just really support each other by repping their merch, listening to their music, and going to their shows because no one is going to do the same for you if you aren’t actively a member of the scene and giving it back. My favorite local spot is probably a tie between The High Watt and the East Room. And my two favorite DIY labels are Never Nude Records (a label that Steve and I just co-founded for this release and hopefully many more in the future) and Cold Lunch Recordings. My favorite record shop is probably Grimey’s over in East Nash.
‍Steve: I really like The East Room. It feels more like a space dedicated to the DIY community in Nashville with a bar, rather than a bar with a stage in it. Even if you’re playing only to the other bands, it always still feels like a supportive space. Vinyl Tap is my go-to record store in town. It’s got a little bit of everything, good vibes, and good beer. Believe it or not, the small town of Warrenton, VA (where we’re from) had a pretty decent music scene when we were in highschool. It’s what got me so into playing shows and playing in bands. I played with Mansions at our local swimming complex and with Shane Henderson (Valencia) at a community center. I don’t think the scene held up very well after we went to college, but it was great while it lasted. ‍

Talk to me about the album, is there a theme? Or is it more a collection of songs? Would you say it's a reflection of where you are now?
Steve: Dry Spell is more or less a collection of songs that we wrote over the last three or so years. They loosely fit into the theme of growing up and the challenges that arise over time. They deal with break-ups, mental illness, getting wasted, learning how to be ok with being alone, and nostalgia for simpler times. We have all contributed feelings of our own to this collective therapy session and we have come out for the better, I think.
‍TJ: Yeah we actually used to be kind of a folky/Mumford and Sons/Avett Brothers type of band back when we first started in Northern Virginia around 2012. But we reformed in 2017, when Steve moved to Nashville and added in Jordan and Rich on guitar and bass. From there, it just felt like a very natural evolution for us to ditch the banjos/mandolins and get back to our roots, which was always a more garage rock/power pop/Weezer Blue album type of vibe. I’ve noticed that lately, I’ve been embracing the punk aspect of our music a lot more and that has slowly been seeping into our songs. This is especially influenced by artists like Jeff Rosentock, PUP, and Rozwell Kid.

‍Your merch and visuals are all sick, there's clearly a lot of thought behind everything you put out. Are you really involved in that side of being in a band? Is it something you guys enjoy? Or maybe more some of you than the others?
TJ: Thanks so much! We take pride in dipping our hands in all aspects of the band from artwork, merch, mixing, mastering, and music vids. Just about every music video was written, directed, shot, and edited entirely by us. Steve does most of the visual stuff because he’s a lot faster on photoshop/premiere than I am and because he actually has a degree from SCAD (Savannah College of Art and Design) for this sort of thing. And Rich and I do a lot of the more technical audio stuff like tracking, mixing, and editing. For this album, we hired our buddy Tom Lowell to do the artwork/layout and new line of merch. In the past, we’ve worked with Jordan from the band Rozwell Kid to design several of our earlier shirts/single artwork.
Steve: We like to be involved in the process of making the designs for our merch, but we usually have our artist friends do the heavy lifting. There’s definitely a back-and-forth involved in the process to make sure it really captures the spirit of the band. With that being said, I am directly involved in shooting/editing our music videos. I usually have something in mind when we do them but sometimes I like to wing-it and let chaos take control of the video i.e. 'Holy Hangover'. I always enjoy the process even if the motivation isn’t always there. I live for when the ideas spark into existence.

What can we expect from you next?
TJ: Yeah our initial plan before the apocalypse hit was to get this record done and just tour on it for the next year or so while writing new stuff. However, the universe had different plans for us. In some ways, for the better. I honestly don’t think we would’ve done as well as we have been currently as far as getting new music and videos out if we were still doing shows as much as we used to. So since touring is off the table for the foreseeable future, I think we’re going to really promote this current album as much as possible and then focus our efforts directly into working on new stuff.
‍Steve: We have a ton of new material kicking around in our noggins, we just have to figure out the form it will take. And as soon as it’s safe to return to the tour circuit, you bet we’ll be on it!

‍If 2020 has changed the world forever, what do you think is next? How did you find creating a record in the current state of things?
Steve: Well, to be honest, we had been working on this album well before the world went to shit. We basically just had to get it mixed and mastered so we figured what better time than now? We had all been laid off from our jobs and didn’t have anything better to do anyways. 2020 has been a monster of a year, but by the time everything is semi-back to normal, everyone’s gonna be ready to get their socks rocked off, and we’ll be there to help.
‍TJ: Yeah I agree, the pandemic did have one silver lining of giving us more time to really knock out this record. Right when everything hit and the US started lockdown we had already had most of the record tracked and all that was left was vocals, extra overdubs, and mixing/mastering. We’re hoping that by the time this record has been out for 6 months or so, we’ll be able to safely get back to touring and most people will actually know all the new songs by then.

‍Something we love doing at Raw Meat is a past / present / future question… so Name one track or band that you love from the past. Name one track or band that you're loving right now. Name one track or band that you think we should be listening out for in the future.
Steve: I love this extremely tough question. I didn’t expect a personal pop-quiz:
Past - Boston’s first record is one you’ll find me listening to on the regular. It’s a master-class in writing energetic songs without sacrificing musical integrity. Songs that get stuck in your head without feeling the need to get rid of them. And their “guitarmonies” were a huge inspiration for me in my writing.
Present - The Beths are a fantastic rock group out of New Zealand that EVERYONE should be listening to right now. They write rippers that also rip your heart out. They do 4-part harmonies and record everything themselves. Plus we met them in Nashville a year or so back, and they are all just genuinely nice people.
Future - Death by Unga Bunga is a Norwegian rock band that’s been around for a bit, but they are finally starting to make some waves in the rock scene. They’ve got a classic sound with all the attitude that comes with it. Definitely check out their Fight! EP. I’ve had it on repeat ever since Spotify decided to gift it to me in my Discover Weekly.

‍TJ: This is a great question! It’s nice having stuff we have to really think about.
Past - I’m actually gonna go with Boston as well. There’s something about the sound of their debut record that just gives me some really heavy nostalgia for a time when you could actually become a really successful band playing rock music. I grew up listening to them with my Dad a lot and Tom Scholz is a mad genius who inspires me to no end. The fact that he wrote and recorded almost every part on that first record and that most of the gear was handbuilt by Scholz himself, blows my mind. It’s so hard to pick but my favorite tracks would probably be 'Peace of Mind' or 'Don’t Look Back'.
Present - I think my current favorite artist that’s really inspiring me lately would have to be PUP out of Toronto. They have a really good way of making their songs easily accessible while still remaining really interesting musically (which is a line I feel like we’re always tip-toeing around). They’ve definitely made me not afraid to embrace more of the high energy/punk elements in our own music. My favorite track from these guys would probably have to be 'Dark Days' or 'Scorpion Hill'.
Future - it’s too hard for me to pick just one band for this so I’m going to throw out a couple. Jeff Rosenstock has been in the scene forever through several different bands but he’s really blowing up these days and his record No Dream is one of my favorites so far of 2020. Other bands you definitely wanna keep an eye out for would be Teenage Halloween (Ashbury Park, NJ), Top Nachos (Queens,NY), Virginity (FL) and H.A.R.D (Nashville,TN).

The escapism indulgence of Dry Spell will be out 20.11.20, and you can support the band by pre-ordering your copy here.